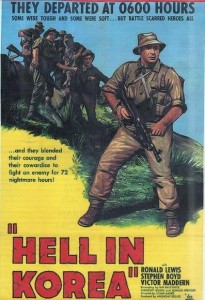 A small British patrol, a mixture of regular soldiers and National Servicemen, is sent to check if a village is occupied by the Chinese. Although the patrol’s commander, Lieutenant Butler (George Baker), is a National Serviceman, he is supported by the experienced Sergeant Payne (Harry Andrews). Observing the approach of a large Chinese force, the lieutenant prepares the patrol to ambush the Chinese. While the initial ambush is successful, it becomes clear that the Chinese force is much larger than expected. Surrounded, the patrol tries to evade the Chinese by seeking shelter in a temple, but there is only one way out. Having lost their only wireless radio, the men of the patrol are unable to communicate with the rest of the army. After a while, the Chinese notice that they are in the temple and launch a series of attacks. Although they survive the assaults, snipers make it impossible to leave the temple. At dawn, they fix bayonets and prepare to fight their way out when friendly planes mistakenly bomb the temple. The survivors are about to be overwhelmed when the planes return and bomb the Chinese.

A Hill in Korea is one of the more realistic movies on the Korean War, including widespread racism, the men’s belief that the war is meaningless, and the Chinese mass attacks.

Signalling their movements with bugles, the Chinese attack in ranks and die in ranks. However, the men are human and when they reach their limit, a Chinese officer literally tries to pull two soldiers with him to continue the attack. While it is natural to presume that the movie is a jingoistic tribute to the British army, showing hordes of Chinese who were no match for trained British soldiers, it is actually extremely accurate. The Chinese ‘Volunteers’ did rely on mass attacks, charging in formation against machine guns, which had proven effective during the Chinese civil war and often worked in Korea. Admittedly, when the attacks did not work, they would be slaughtered, but Peng Dehuai, the commander of the Chinese army in Korea, was never given the time he needed to retrain the army.

The men of the patrol openly refer to Koreans as gooks and Chinese as Chinks, and treat local villagers roughly. However, a Korean soldier is attached to their platoon, and he is respected for his ability. Unsurprisingly, he speaks pidgin British, not pidgin American.

Throughout the movie, the members of the patrol die one by one from a variety of causes, including booby trap, grenade attack, accident, sniper, and friendly fire, as if to compress the war into eighty minutes. Unlike most films made during the 1950s, the script is honest about the tragic frequency of friendly fire incidents. At one point, the patrol is bombed by American planes, which was far too common during the chaotic retreats when Chinese and North Korean units were mixed in with UN and ROK units.

The film is dedicated to the National Servicemen and drafted soldiers of all free democracies, and the opening credits introduce the National Servicemen and regular soldiers of the patrol. The script does not hide the conflict between the regulars and the national servicemen, who are viewed as amateurs by the regulars. The lieutenant is a good man, who gives Private Wynn (Ronald Lewis), a malingerer, a pep talk. The main subplot in the script revolves around British class issues, and it turns out that Wynn looks down on the rest of the men because he is better educated and they are all lower-class. Since it is a British film, as soon as the men have a free minute at the temple, they play football.

The true test of a war movie’s realism is the amount of grumbling and piss-taking among the men, and this film has more than its fair share. A standout scene is an insightful discussion about how the Chinese will win because there are more of them and they are uncivilized, so they have nothing else to do, while civilized white men want to watch a show on the telly and go down to the pub for a pint. Simplistic, but it sums up many people’s attitude at the time. While the movie is a tribute to the National Servicemen, the script is an uncompromising rejection of blind patriotism. The men know that it is a forgotten war, so they will not be heroes if they survive and go home, which was far too true, unfortunately.

It is the first movie where Michael Caine is listed in the credits, but he only has one line, if you blink you will miss it. Stephen Boyd and Robert Shaw also have small roles.

The story of a small patrol on its own, disconnected from the main army, is not especially original, but its gritty realism makes the movie worth watching. At first glance, the story seems to have been copied from numerous WWII films but this is definitely a Korean War film because the men know that everyone back home thinks the war is unimportant, the Chinese use mass attacks, and friendly fire incidents are far too common. A tribute to the national servicemen, it is one of the better movies on the Korean War.