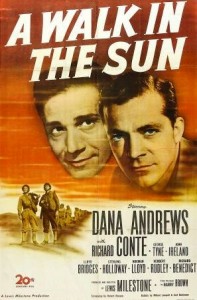 When the United States entered WWII in December 1941, the American military leadership wanted to focus their efforts on landing in France and advance directly on Germany in order to end the war as quickly as possible. After much debate, the British convinced the Americans to postpone the landing in France in favor of a campaign in the Mediterranean, hoping to knock Italy out of the war and improve communications with Egypt, India and Asia. Following amphibious landings at Morocco and Algeria, both controlled by Vichy France, in November 1942, the Allies advanced across North Africa, and launched an invasion of Sicily in July 1943. A successful invasion of Italy would hopefully draw German troops away from the Eastern Front, soothing an irate Josef Stalin, dictator of the Soviet Union, who repeatedly complained that the Soviets were fighting Germany alone. The Allies landed in Italy in September 1943, but the Germans proved more difficult to evict than expected.

While the members of an Army platoon are nervously waiting in a landing craft to hit the beach at Salerno, the young lieutenant in charge of the platoon is wounded by a shell fragment. When they land on the beach, Sgt. Halverson, the senior sergeant, leaves Sgt. Eddie Porter (Herbert Rudley) in command, while he goes to notify the captain of the lieutenant’s wound. Their mission is to dig in on the beach, wait for dawn and march six miles inland to occupy a farmhouse and destroy a nearby bridge. When dawn breaks, Halverson has not appeared, so Porter reluctantly leads the men inland. Later, he learns that both the lieutenant and Halverson are dead. Porter gradually starts to crack under the pressure, leaving Sergeant Bill Tyne (Dana Andrews) to pick up more of the slack. Eventually, Porter has a complete breakdown, leaving Tyne in charge. They finally reach the farmhouse, after several encounters with enemy planes and armored cars, having left a trail of dead and wounded behind them. Surrounded by open fields, the farmhouse is a deathtrap, so Tyne is forced to order an attack from every side, knowing that he will lose even more men, which causes him to begin to crack as well.

Since the film focuses on a small unit, viewers will learn little about the Italian Campaign during the Second World War, but they will gain an understanding of how soldiers dealt with the pressure of combat. The script captures the isolation felt by many soldiers. Alone in the dark on the beach, the platoon is completely cut off from the rest of the landing force, even though they are on the same beach. A major air attack on the fleet is shown from the perspective of a couple of soldiers left near the beach, where they can hear the battle, but can not see it. Don’t worry, it is not a film where men sit around and talk, several small fights provide intervals of terror.
There is endless griping from grumpy, surly men who were already fed up with the war after Tunisia and Sicily, and now have to fight their way through Italy. They are even jealous of the lieutenant’s wound, believing that it will send him home with a Purple Heart. The griping is excellent. In fact, most of the movie consists of the men complaining and arguing among themselves, punctuated by brief moments of terror that produce more casualties, but it soon becomes clear that the soldiers adjust to the pressure by complaining, otherwise they would all break down.
Aside from the griping, the film stands out for its honest approach to fear. Several of the men admit that they are scared or complain of stomach cramps and dizziness before each attack, and the strain of command starts to take a toll on Tyne as well. Since they all face the same fears, no one criticizes Sgt. Porter when he has a breakdown. Private Windy Craven (John Ireland) comments that Porter is wounded inside, after fighting one battle too many.

Made near the end of the war, and based on a novel written in 1943, the movie is a dramatic shift away from the whitewashed propaganda films that were churned out by the dozens during the war. The film did not strain the limits set by the Production Code, there is no swearing or gory wounds, just a clear-eyed depiction of life on the front for a platoon. The main drawback is an exceptionally annoying ballad that plays repeatedly throughout the film. Seriously, I can not emphasize the irritation enough. Director Lewis Milestone claimed to have been the first to use a ballad in a film that way, but it is nothing to be proud of.

An excellent movie, there is no fake heroism, no personality conflicts, just tired men trying to do a dangerous job they don’t want to do.