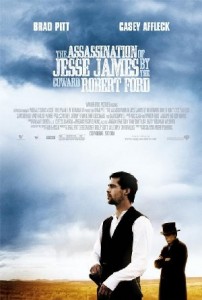 By 1879, the James brothers, especially Jesse, were famous. Jesse explained away his wealth as the result of commodities trading, while even his children did not know his real name or why they moved so often. Unwilling to abandon the outlaw life, Jesse assembled a new gang, made up of inexperienced men: Charley Ford, Dick Liddil, Ed Miller and Jesse’s cousin Wood Hite. However, the times are changing and pickings are slimmer. Furthermore, tension is brewing between gang members Liddil and Hite, rivals for the love of Ford’s sister Martha, while the strain of living in fear of the law makes Jesse increasingly paranoid.

When the gang robs a train at Blue Cut on September 7, 1881, but finds only an empty safe, Frank moves away. Lonely and amused by the obvious hero worship of Charley Ford’s younger brother Bob, Jesse lets Bob stay with him.

Believing that members of the gang are conspiring to turn him for the sizeable reward, Jesse takes brutal action to protect himself. Although his paranoia is temporarily soothed, the disappearance of his cousin Wood Hite fuels Jesse’s distrust of everyone. When Jesse’s suspicions turn to the Ford brothers, Bob contacts the governor and arranges to betray Jesse. After several terrifying days, the brothers finally have their opportunity but the act haunts them for the rest of their lives.

The movie starts with the gang’s robbery of a train at Blue Cut where they hold up the passengers because the safe was empty. A touching, wordless scene between the James brothers shows that Frank is done with robbing, but there is no mention of the fact that he had already embraced honest work. More important, the real Frank had moved away because former gang members Tucker Bassham and Bill Ryan had been put on trial in September 1881, the same month as the Blue Cut robbery. Lacking the shared bonds forged in war, Bassham had testified about the James brothers, so Frank realized that his wife and child would only be safe after he cut ties with Jesse and abandoned the outlaw life. The absence of Ryan and Bassham from the story is strange, especially since their capture was a key factor in the rapid growth of Jesse’s paranoia.

The screen gunfight between Wood and Dick is generally accurate but the real Bob walked in just as they started shooting at each other. While Liddil and Wood Hite had drawn guns on each other in Kentucky, the subplot of Dick’s carnal relations with Wood’s step-mom is artistic license. None of the new members of the gang were former guerrillas, who had been hardened by the Civil War, so it is natural that the men are visibly terrified during the shootout and miss several times even though they are facing each other.

The actual gang met regularly at Martha’s place, but this does not appear in the screen version. Moreover, none of the other robberies that Jesse committed either with the gang or separately with Liddil are shown or even referred to during the movie.

Casey Affleck’s portrayal of Bob as a creepy stalker is impressive but unnecessary, since Jesse liked both Ford brothers. The fictional Bob is kicked around by everyone, even his own family, as part of a relentless effort to show that he killed Jesse out of resentment and frustration, instead of a desire for the reward and the knowledge that the Ford brothers were dead men once Jesse learned of their involvement in his cousin’s death. Since both Ed Miller and former guerrilla Jim Cummins had vanished after arousing Jesse’s suspicions, the Fords knew what to expect.

The in-fighting within the gang confirmed Missouri Governor Thomas Crittenden’s decision to offer a huge reward to encourage betrayal. Financial backing for the reward had come from the heads of the major railroads that operated in Missouri. Worried that being the home state of a notorious outlaw who flaunted the law would weaken investment and immigration, they agreed to fund a $10,000 reward for each James brother, half on capture and half on conviction. Crittenden rarely receives the credit that he deserves, since it was his strategy that finally brought down Jesse James.

In the movie, Bob contacts the governor only after Jesse becomes suspicious. In reality, the Ford brothers had immediately approached the governor, using Martha as an intermediary. To prove their connection to the outlaws, they directed the sheriff to Wood Hite’s brother Clarence, yet another gang member who is absent in the film. Despite the constant refrain about the need for secrecy, the screen Bob approaches the governor at a ball in front of 100 people. Admittedly, the actual meeting did take place during the ball but the genuine Bob understood that discretion meant survival. After agreeing on the terms, the Ford brothers operated without further contact with the governor, and they lived with Jesse for a couple of weeks.

The sheer terror of hanging around Jesse while waiting for an opportunity but fearing the consequences of failure is palpable. Moreover, Jesse’s screen death follows the actual events very closely.

Since the movie is about Jesse, the tragic fate of the Ford brothers is covered quickly. Showing how curiosity seekers came to see Jesse’s body is an effective if grisly touch that reminds the audience of the public’s morbid fascination with celebrities. The Ford brothers’ stage show in New York is presented without shying away from the utter freakiness of making a living re-enacting shooting someone from behind. Charlie’s final fate is correct, but his tuberculosis and morphine addiction are ignored.

The cinematography is gorgeous and the Albertan landscapes are genuinely stunning but instead of serving the story, the story seems to exist simply as an excuse for long tracking shots of bleak scenery. Unlike the sharp, fascinating dialogue, the endless narration does not flesh out the story but spells everything out for the viewers, telling them what they are watching, instead of letting them figure it out for themselves. At times, the narration borders on the absurd. Saying that rooms felt hotter when Jesse was in them is just silly.

However, the acting is superb. Brad Pitt does project a striking menace, and Sam Shepherd is wonderful as Frank James, fed up with dealing with amateurs. Affleck deserves credit for playing such a tormented soul. Despite receiving top billing, Mary Louise Parker is given so little to do that her part borders on being a cameo.

The movie is an interesting psychological drama with amazing period detail but the historical accuracy does not live up to the hype. Several members of the gang are written out of the screenplay, a key trial is ignored, and only one robbery is presented, which seems odd for a film about a famous bank robber. These changes were presumably made to leave enough time for the narration about how Bob lay down in Jesse’s bed and smelled the sheets. While the screenplay works hard to portray Jesse as a suicidal individual with serious psychological issues who likely welcomed the assassination, it fails to show his constant gambling or the racehorses that he owned, probably because that would have contradicted the director’s vision, as well as brought some cheer to the painfully long film.

There have been many movies about Jesse James, and although The Assassination of Jesse James by the Coward Robert Ford is superficially more faithful to the facts, The Long Riders (1980) captures the clannishness that enabled the outlaws to survive for so long.