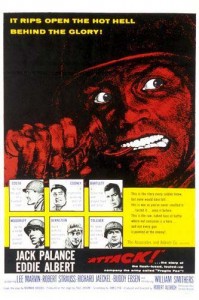 As the Allies drive the Germans back to Germany in late 1944, morale is low in Fragile Fox Company because an entire squad was slaughtered when Captain Cooney (Eddie Albert), the company commander, was too scared to lead the rest of the company to support them. Lt. Joe Costa (Jack Palance) loathes Cooney because the squad was part of his platoon. Lt. Harold Woodruff (William Smithers), the company’s executive officer, hopes to convince Lt. Colonel Clyde Bartlett (Lee Marvin), the battalion commander, to transfer Cooney, but Bartlett’s political ambitions depend on Cooney’s father, a judge who controls the local political machine. Well-aware of Cooney’s weaknesses, Bartlett refuses to push Cooney upstairs, although he promises that there will be no more combat. When the Germans launch an unexpected offensive, the company is assigned to occupy a nearby town, but Cooney decides to send only Costa’s platoon to check it out. Once again, Cooney fails to provide the promised reinforcements, leaving Costa’s men dangerously exposed, and the death of each soldier sends Costa further over the edge. After Cooney has a nervous breakdown, Woodruff has to deal with a maniacal Costa, intent on murdering Cooney.

Although set during the Battle of the Bulge, viewers will learn little about the German offensive. When the company is resting in the town, the soldiers wonder if the war is almost over. Hoping to reassure Woodruff, Bartlett promises that the company will not see combat again. This attitude reflects American over-confidence before the Battle of the Bulge. To be fair, the Ardennes region was considered safe, and the Allied generals thought that the Germans would remain on the defensive. Confusion reigned during the first day of the offensive as each unit struggled to survive an unexpected attack, so the movie captures the perspective of the average company, where soldiers hoping to rest, suddenly found themselves fighting off Germans, all too aware that there was no one behind them to help.

A surprising success at the box office, Attack was the first movie made after WWII to show cowardice and corruption within the American military leadership. The success repaid director Robert Aldrich’s belief in the project. Having financed most of the film’s budget himself, he received a percentage of the profits instead of a salary. Aldrich had a lifelong hatred of traditional authority, and the enemies in the film are the American authority figures who repeatedly fail the men. Like all of Aldrich’s films in the 1950’s, the protagonist struggles to survive in a system with his self-respect.

Given the film’s subject, the U. S. army refused to cooperate, so Aldrich was denied access to troops and tanks, and could not even use Signal Corps footage. All of the equipment, including two tanks, was rented, and the movie was shot on a back lot of RKO Studios. The army’s refusal to cooperate is not surprising. The movie pulls no punches, and the survivors of Costa’s platoon radiate contempt for Cooney, but it is left for the viewer to decide who is the real villain, Cooney or Bartlett.

The film was made early in Lee Marvin’s career when he was limited to soldiers and thugs, so Aldrich had initially wanted Marvin to play Sgt. Tolliver, Ebsen’s character. Having seen an officer like Col. Bartlett when he was a Marine in WWII, Marvin was eager to play that role, and he created an astonishingly repulsive character, who relentlessly tempts Woodruff with compromise after compromise. However, the standout performance was given by Eddie Albert. During the final confrontation with Woodruff, Cooney cracks, revealing that his father had beaten him to make him a man, and he curls up on the cot crying. Actually, the cowardly bully Cooney was quite a change for Albert, who had had a successful career as a song-and-dance man. Aldrich focused on the four leads, leaving less time for the supporting actors, who are all solid character actors. Buddy Ebsen could play the role of Tolliver in his sleep. All war movies need a griping soldier, and Robert Strauss does some excellent griping.

There is a noticeable contrast in the anxiety that paralyzes Albert in the field and his confidence in the office where he smoothly handles the logistics for his company. Placing Costa in a blacksmith’s shop, where he praises the ancient profession, shows that he is a craftsman who rejects the idea of compromise that govern both Cooney and Bartlett.

Despite the excellent performances, the end is too stagey. Costa’s final death scene is painfully melodramatic with a lengthy speech from Costa begging for the strength to lift his arm high enough to shoot Cooney, instead of simply showing a man struggling to raise his arm.

While Jack Palance’s vengeance-driven Lt. Costa is suitably intimidating, the standouts are Lee Marvin as a manipulative, corrupt battalion commander and Eddie Albert as the cowardly, bullying company commander.