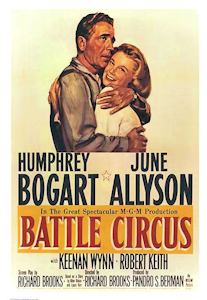 Several new nurses, including Lieutenant Ruth McGara (June Allyson), arrive at the 66th MASH mobile field hospital, and she meets Major Jed Webbe (Humphrey Bogart) after he saves her life when an enemy plane strafes the camp. The unit moves every few days, following the ever-shifting front, but each new camp is set up with military precision. The whole process of packing up equipment, taking down tents and putting them into trucks, is supervised by Sergeant Orvil Statt (Keenan Wynn), who used to work for Barnum and Baileys. Although a good leader and an excellent doctor, Webbe hits on all of the nurses, and the more experienced ones know his routine by heart. The advances continue until McGara falls in love and mentions marriage, but he is bitter and does not believe in love. Believing that Webbe can change, and encouraged by Colonel Hilary Walters (Robert Keith), the commanding officer, McGara persists. Unfortunately, a surprise enemy offensive causes the unit to move through Chinese-held territory, and the couple are separated during the chaos.

Intended as a tribute to the doctors and nurses who staffed the MASH hospitals, the movie presents the rough conditions they faced, including rain that turns the roads into mud, near-typhoon winds that threaten to blow down the tents and the constant need for more blood, as well as snipers outside the perimeter. The movie’s title Battle Circus refers to the hospital’s ability to pack up and move like a circus. The attention to detail is the movie’s strong point, which is unsurprising since the technical adviser had commanded one of the first MASH units in Korea, and they filmed near the US training base for MASH units.

It is a patriotic film, and the American involvement in the Korean War is never questioned, but Webbe is worn down, tired of never getting caught up with the wounded. At one point, he complains that three world wars in a generation is too much. Actually, this is the first film that I have encountered that describes the Korean War as a world war.

Like far too many American films, the only Koreans shown are refugees, not soldiers. However, the Korean refugees are treated well. When a soldier calls the refugees gooks, he is told off by Sergeant Statt.

There are people in the world who enjoy a performance by June Allyson. I am not one of them. I make no criticism of her worth as a human being, but her screen persona is torture to watch, so I dread reviewing any movie with her in the cast. Fortunately, she was less annoying than usual. Allyson had a well-earned reputation in Hollywood for her ability to cry on demand, and that ability is frequently employed in the film. The rest of the cast are solid, especially Robert Keith and Keenan Wynn, but it is Bogart’s film.

The movie would actually be enjoyable except that the romance between Webbe and McGara dominates the script. They keep having weird encounters that are supposed to be funny, but the attempts at slapstick fall flat. There is a reason why this is not one of Bogart’s better-known films, but his sleazy routine is pretty entertaining. In fact, the movie is a bit risque for 1953. One of the older nurses advises McGara that it is okay that Webbe is married, since experienced drivers are better. The script hints that they had sex one night because they wake up in each others’ arms, but still with their uniforms on. It was 1953 after all.

It may seem strange that he does not run to her when they are finally re-united, but it is not sexist. BOGIE DOESN’T RUN.

The impressive detail ensures that the film is better than expected, even though tepid would be the kindest description of the romance.