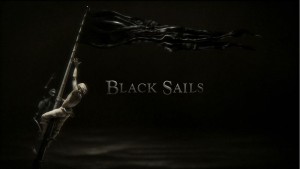 Black Sails is set twenty years before the events of Robert Louis Stevenson’s novel, Treasure Island, which details the efforts to find treasure that had been hidden by Captain Flint. In Black Sails, Flint is a successful pirate, who is searching for the Urca de Lima, a Spanish treasure galleon, and he is backed by Eleanor Guthrie (Hanah New), whose family fences the pirates’ captured cargoes at Nassau. The entire season revolves around the search for the Urca, Flint’s crew’s growing mistrust and Eleanor’s attempt to deal with the threat of a British crackdown on the pirate haven.

The series suffers from three problems: there is no background; the hunt for the Urca is ludicrous; and the pirates did not work for a kingpin who fenced their stolen cargoes and gave leads on potential targets.

The entire hunt for the Urca is incredibly convoluted.

The entire season is devoted to the hunt for the Spanish treasure galleon, the Urca de Lima, which is filled with silver and is sailing alone. The Urca is being sent without an escort because it was too late to arrange an escort and the Spanish king insists that the silver reach Spain as soon as possible. Why does an English merchantman captain have the sailing schedule for a Spanish ship you ask? Because a Spanish secret agent told the entire story and schedule to the merchant captain in a tavern shortly before dying. Why the captain recorded the Urca’s entire sailing schedule and did not tell anyone is never explained, probably because none of the writers could come up with a reason that made any sense.

Wow, that is one of the silliest plot devices I have ever had the misfortune to watch. I had to watch the scene several times to figure it out, and it made less sense each time.

The Urca de Lima did exist, and it was shipwrecked on the coast of Florida in 1715. Yes, it was filled with silver. No, it was not sailing alone, it was part of a treasure fleet of twelve ships because the Spanish routinely shipped silver in treasure fleets, otherwise pirates would steal it. Duh.

Black Sails is a prequel to Robert Louis Stevenson’s Treasure Island, so anyone who has read the novel, like I did during high school, or read the summary on Wikipedia, like I did while writing this review, knows who will survive and that Flint will find his great treasure, and then betray his crew. Lucking out and looting the wrecked Urca would have been enough, instead he murders and lies so he can get a treasure and become king. 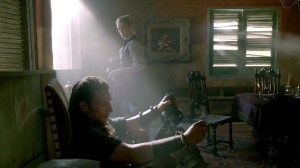 What is wrong with an examination of the macro-economic forces that caused the explosion in piracy after the end of the War of the Spanish Succession (1701-1714)? Or even mentioning the war? 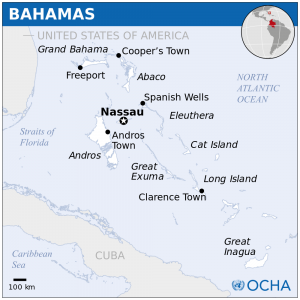 The series takes place near the end of the Golden Age of Piracy (1650-1730). During the War of the Spanish Succession (1701-1714), Britain had unleashed thousands of privateers, essentially legalized pirates, to raid Spanish merchant ships. Privateers were popular because they were much cheaper than paying for the expansion of the Royal Navy, and all captured cargoes were sold to the British government, which turned a nice profit re-selling the goods. When the war ended, the British government cancelled the privateers’ licenses, presuming that the privateers would happily return to crewing on merchant ships. However, a surplus of sailors on the job market led to low wages. Faced with few job prospects and aware that the thriving cross-Atlantic trade offered a wealth of targets, many of the ex-privateers adjusted their business model and became full-fledged pirates, attacking ships from every nation. The cargoes were sold at Nassau, on the island of New Providence in the Bahamas, which was claimed, but not actually governed, by Britain.

Unfortunately, the writers ignored the economic shock caused by the end of the war, when thousands of privateers were suddenly thrown on the unemployment line. Instead, the first episode plunges into the story when the pirates have already been operating for years.

The kingpin of crime. 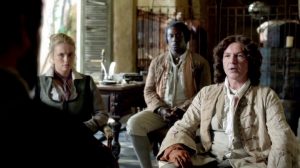 The pirates sell their cargoes to the Guthries, who fence the goods through legal contacts. The Guthries in the Caribbean are part of a powerful family network based in Boston. However, everyone worries that sooner or later the British will remember the colony, and re-establish law and order. Richard Guthrie (Sean Michael), Eleanor’s father, has been bribing key members of the British government for years, hoping to win the position of governor, except there was no need for bribery during the war. It’s as if the writers moved the chronology back several years just so they could match the correct date of the Urca shipwreck.

I understand that the pirates are given a single fence to make the story simpler, but the idea that the fence fed the pirates leads on what merchant ships would be juicy pickings is completely off. It was a cool idea to portray the pirates as modern robbers but the Caribbean and the American coast is a huge region. Pirates would cruise in the Caribbean during the winter and shift operations north during the summer, raiding along the Atlantic coast up to Newfoundland. Rather than work for a kingpin of crime in her lair in Nassau, the pirates sailed around and attacked any merchant ships that they found. 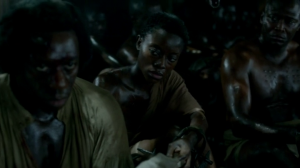 Since her actual father, Richard Guthrie, treats her like an incompetent employee, not a daughter, Eleanor has substitute fathers in Mr. Scott (Hakeem Kai-Kazeem), Flint, and Captain Hornigold, but she also resents their attempts to actually act like surrogate fathers and advise her, which seems unfair. Eleanor’s relationship with Mr. Scott is especially complex. Although she always treats him as a trusted adviser, Mr. Scott is brutally reminded at one point that he belongs to her family.

Ever happy to state the painful truth, Silver points out that Eleanor doesn’t like having to admit that she was wrong or being forced to back down. Determined to be the alpha, she is willing to have many men killed to keep her position. While she is not particularly likeable, I appreciate the need for Eleanor’s character. Aside from Miranda Barlow, who is basically Flint’s wife, and Bonny, all of the women on the show are prostitutes. Admittedly, Eleanor has a horrible temper but her position is precarious. Instead of trying to understand her, all of her substitute fathers wish that she would be reasonable and listen to them. 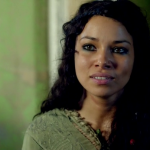 Neither Eleanor nor Flint actually care about the people in Nassau, they just want to move up in society. Both are willing to sacrifice anyone to achieve their goals, and Eleanor’s relationship with Max, a prostitute and one of the many people scheming to get rich, does not last long. Actually, Max and Scott are probably the only decent people on the show, and Max proves to have a surprisingly strong character.

Flint is stark, raving mad. And he has a secret.

It is eventually revealed that Flint and Miranda Barlow (Louise Barnes) had fled England after a huge scandal, and Flint would be arrested if the government discovered his real identity. At one point, one of the many schemers offers to arrange a pardon for Flint, but he refuses to even consider a pardon because it would mean apologizing to England after the government took everything from him. Instead, Flint wants to use the treasure from the Urca to turn Nassau into his own kingdom, so he can deal with England as an equal. Admittedly, England did not yet rule the seas yet, but the idea that Nassau could raid enough legitimate traffic to survive and not attract the attention of Spain, France or England is insane. 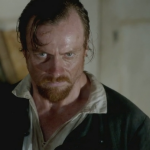 Flint admits openly to his subordinates that he wants to become king of his own nation. Since the pirate crews are democratic, criminal ventures, it would seem likely a captain who tosses around megalomaniacal would see his crew find a captain who has more reasonable goals, namely loot a rich cargo and then head for the nearest brothel. 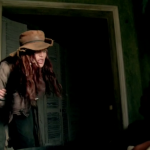 While the show revolves around the struggle for power between Flint, Eleanor and Vane, Rackham is my favorite character, constantly told either to fuck off or to get his fucking act together by pretty much every single person on the show at one point in time or another. I sympathize with Jack, the voice of reason is never appreciated. A good drinking game would be to take a shot every time someone on the show says “Fuck you Jack!” It will get you liquored up and ready for love.

We are all just thieves awaiting a noose. 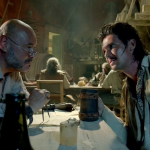 Part of the problem is that you are supposed to root for the pirates, even though they were robbers who attacked innocent merchantmen, killing any who resisted and torturing people to learn where the treasure was hidden. It is natural to identify with the two quartermasters, Gates (Mark Ryan) and Rackham, who are constantly striving to deal with insane captains with violent tendencies. Billy Bones, Gates and the rest are sympathetic characters, who have a rough form of democracy on their ships, and treat each other fairly. Also, their goal of loot is simple, especially when compared to lunatics like Flint and Vane. But their entire existence was based on taking from the weak, not building anything. Hornigold is the first to realize that they are just thieves awaiting a noose.

I have to admit, the battle scenes are cool. 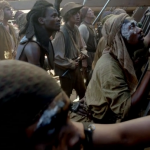 Most merchantmen were lightly armed with small crews, so the pirates caused as much terror as possible and overwhelmed any resistance to keep their own casualties low. However, you can’t have a pirate show without sea battles. At one point, Flint’s crew has to capture a merchantman that is as well-armed as a small warship. The gruesome battle is shown through the eyes of a terrified young member of the crew who is taking part in a boarding for the first time. The crew is filmed as if they were in a trench in WWI, waiting to go over the top, and the boarding scene is frightening.

The best part about the series are the ships. Since the show was renewed for a second season even before the first season aired, the producers were able to spend a lot of money on several ships, and it was money well-spent. 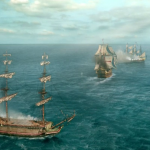 The scenes at sea make up for the tawdry soap opera that fills most of the episodes. 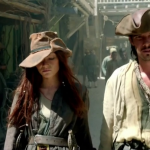 Flint loves Miranda Barlow, who loves Flint, but she also plays coy with the local pastor. Eleanor loves Max (Jessica Parker Kennedy) and Max loves Eleanor but Eleanor used to love Charles Vane, who still loves Eleanor. Rackham loves Bonny and Bonny loves Rackham. Nobody loves John Silver, although he can take some consolation in Randall, his BFF. To be honest, the relationship between Rackham and Bonny is the only one that seems believable since they squabble like the old married couple that they are.

Speaking of Randall, he is a great character, and it is never clear if he is crazy or not. He seems to have been created to plague Silver, whose increasing frustration at dealing with the near-mute, insanely stubborn cook whom he replaced is a joy to watch. 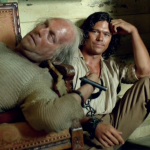 If you want sex, it’s got sex, including a pastor, who seems to lack stamina. It was a lot more fun on the second viewing than I remembered, but the story still makes no sense. After a weak first episode, it got better, although the series never really rose above a teenage boy’s hormone-driven fantasy of rock-hard abs, plentiful sex and admittedly cool battles.