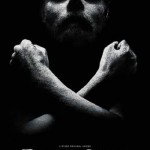 None of this happened, but it has ooodles of violence, steamy sex scenes between physically perfect people who are good actors, wearing mostly period clothes, and the constant betrayals are fun to watch, so you can be entertained while pretending to learn something. Kind of.

It is amazing how little time passes in each season. And the second season started seconds after the end of the first season. When last season ended, Captain Flint (Toby Stephens) had lost his ship and his crew. Very quickly, he gets a better ship, then the crew. How he does it is a little improbable, but entertaining. 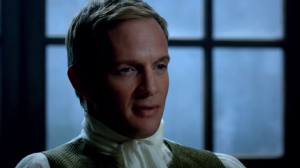 I know that I wrote in my review of the first season that I wanted more background, but I meant accurate background, not silly, silly make-believe background.

Flashbacks set in 1705 show how Flint met Miranda Barlow, actually Miranda Hamilton (Louise Barnes). Flint’s real name was Lieutenant James McGraw, assigned as naval liaison to Lord Thomas Hamilton (Rupert Penry-Jones),who has been made responsible for the colony at Nassau, which is overrun by pirates. Believing that the pirates are merely a symptom of the widespread corruption in the colony, Hamilton wants to pardon them, hoping they will become productive members of the colony, but he is opposed by his father, a nasty, narrow-minded man, who is the lord proprietor to the Carolina colony, including the Bahamas. It is never really explained why Hamilton is so fixated on pardoning the pirates, other than he is a noble visionary. Hamilton’s plan to save Nassau is threatened when a dispute over a bribe between a pirate and the governor ended in the public murder of the governor’s family to show who is in charge. 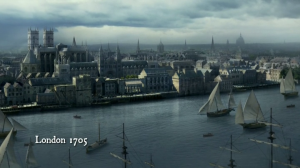 The entire situation is made-up. There was no governor in Nassau between 1703 and 1718, which is why the pirates used it as a base. In fact, the whole plot does not make sense. Claiming that the pirates are a disruption during wartime, Hamilton wants to pardon them and make them law-abiding colonists. In reality, there was little piracy at the time for the simple reason that no man would risk his life to be a pirate, when he could serve as a privateer, basically a legally authorized pirate against the enemy. The privateer industry was thriving at the time, so there were many job openings. The War of the Spanish Succession (1701-1714) had started when England, Holland, Austria and Prussia combined to oppose the union of France and Spain. Possessing weaker navies, France and Spain launched hundreds of privateers against English and Dutch merchantmen. Aware of the massive wealth produced by Henry Morgan’s privateers a generation earlier, Jamaican merchants outfitted many privateers, while the merchants of Bristol had made the same conclusion, supported by the government. 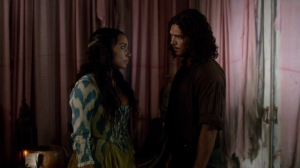 The constant scheming makes the show entertaining, and almost makes up for the complete disconnect from history.

I am not sure who is better at betrayal and scheming, John Silver (Luke Arnold) or Max (Jessica Parker Kennedy), but they are both a delight to watch. And honestly, the only characters I find interesting. Solely motivated by self-interest, Max is fun, and I loved her explanation to one of her whores about the difference between seduction and fucking the shit out of a man.

Driven over the edge by one betrayal too many, Anne Bonny (Clara Paget) goes on a murderous rampage, creating such a screwed-up situation that it requires the considerable scheming talent of both Max and Silver. It’s funny, Max manipulates Bonny for her own advantage because it is her nature, but she then risks her entire business and her life to protect Bonny when she goes completely crazy. The scene where Max reminds her main prostitute that Bonny had saved her when she was kept in a tent on a beach as a slave to violent men is something to see. 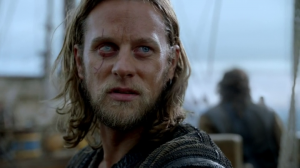 Ned Low does not play well with others.

Bad boy Captain Ned Low (Tadhg Murphy) shows up and quickly becomes a threat to Eleanor Guthrie (Hannah New), which seems like it should have been a more common problem. Pirate crews frequently numbered more than seventy men, and disputes with such a large number of violent men would have been dangerous, yet Eleanor treats most of the pirate captains with open contempt. However, Low is presented as a rarity. At first glance, the screen Low appears to be little more than a particularly brutal thug, but he displays remarkable insights into the island’s power structure and the delicate balancing act required to retain the loyalty of a crew. Sadly, his time on the show was brief, even though the real pirate apparently lived for several years more, but he should have been used longer, especially since the actor made him work in just a couple of scenes. 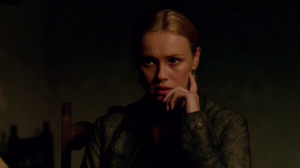 Speaking of Eleanor, while the writers show the vulnerable situation caused by her confrontational attitude, her dominance of the island is still difficult to understand. Elanor’s primary power is based on her dual position of sole fence and supplier of leads. The fence part is relatively accurate, since a number of merchants did buy the captured cargoes from the real pirates, although they wisely kept a safe distance between themselves and the pirate base. However, no one has ever explained where these leads come from. Either Elanor has a radio set and agents in every major port or…hm, there is no other option. There were many ports, so she would require an army of agents monitoring the departures from every harbor, and even then the ships carrying the information would only move as fast as the targets. Which is probably why the real pirates simply cruised the main shipping lanes, hoping to find juicy pickings.

Given how many men Eleanor has betrayed her final fate should not be a surprise. Frustrated by Eleanor’s endless machinations, Captain Benjamin Hornigold (Patrick Lyster) hands her over in exchange for ten pardons. While the real Hornigold did accept a pardon, it was a general pardon offered by the crown. Still, the abduction was suitably dramatic. 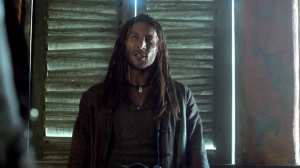 Through an odd series of events and an astonishing amount of violence, Charles Vane (Zach McGowan) gains possession of Abigail Ashe, the daughter of the governor of the Carolinas colony. Learning that Vane plans to ransom her to her father for enough gold to keep the island’s brothels and taverns busy for months, Flint proposes to return Abigail unharmed to her father, in order to convince him to help negotiate an amnesty with England. Unsurprisingly, Vane is contemptuous, recognizing that Flint is deluded if he believes that most of the 500 pirates at Nassau will give up pirating to become respectable citizens meekly serving the establishment. Flint and Elanor have a dream of turning Nassau into a proper colony but none, literally none of the other pirates share that dream. Vane is the only one who laughs openly at the idea, but the pirates simply wanted money or something they could divide easily and trade for rum and women. The pirates fought for money, and while they made a republic on their ships, they never made one on land. Nassau was merely the place were they spent their money, and its lack of organization was its attraction. 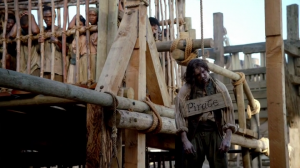 So, why did men decide to become pirates?

Honestly, I am curious. There are endless conversations about the merits of offering pirates pardons, but the writers never showed the harsh life and dismal economic environment that drove many men to choose the lucrative if high-risk career of piracy. The chances of a large enough score to retire were small, while captured pirates were hung.

Since the writers won’t explain the causes of piracy, here is a brief explanation, at least of English pirates.
Greedy landlords had driven independent farmers off their land, and the expansion of English colonies and international trade had created a growing need for sailors, even though a sailor’s life was hard and dangerous. Voyages lasted for months, if not years. Sailors had to adjust the sails in rough weather; they slept in crowded communal cabins; the diet of salt beef and ship’s biscuits was bland at best and repulsive after a few weeks once maggots and weevils had entered the food stocks; and fresh water ran out after a few weeks, causing scurvy and dysentery. Discipline was strict, and sailors received terrifying beatings for minor offenses. Treatment was still better on the merchant ships, so the Royal Navy employed a more direct approach, sending press gangs to abduct any sailors they found on the streets. Life expectancy was short. Half of the sailors in the Royal Navy died at sea. Ships in the slave trade would lose a third or more of their crew to tropical fevers. Given such a situation, it is surprising that more men did not become pirates.

On the voyage to return Abigail to her father, Flint tells the origin of Billy Bones (Tom Hopper), but none of the stories of the rest of the crew. A missed opportunity, it reveals that the show is simply a soap opera, rather than a vehicle to present the factors that made men become pirates. 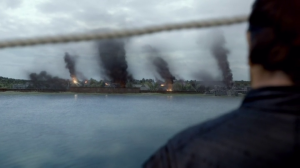 Um, should I even bother pointing out that the pirates never destroyed a town.

Initially, it appears that Flint’s bizarre plan will work. Grateful for the return of his daughter, Lord Peter Ashe (Nick Boraine) offers to examine Nassau for himself and then sail with Flint to London where he will tell Parliament everything, which is supposed to destroy the monster “Flint” that terrifies England, enabling him to be forgiven. Wow. Just wow. Somebody wrote that and other people, presumably sober people, approved it.

Usually relegated to the voice of reason who is ignored, Miranda has a spellbinding confrontation with Lord Ashe, when she realizes that he had betrayed the affair between Hamilton and Flint to Hamilton’s father years ago in exchange for the position of governor.

Learning that Ashe intends to hang Flint, Vane rescues him, and Charleston is bombarded into burning rubble to remind everyone in the Americas that they should fear the pirates. True, the British colonies were relatively small at that time. Port Royal in Jamaica had three thousand people in 1700, New York City eighteen thousand and Charleston five thousand, so two or three well-armed pirate ships were daunting. However, none of the pirate crews ever bombarded a town. Blackbeard blockaded Charleston to obtain medicine for his crews but even he did not dare attack a town, and he had one of the most powerful fleets of the period.

Honestly, at this point, I feel that I am simply going through the motions. Nothing makes any sense but it is astonishingly melodramatic. However, I have to give credit, the plot moves along at a breakneck pace like a proper soap opera, where a new crisis appears just when the last one was resolved.

In a way, the final stage of the golden age of piracy was like the Public Enemy Era, very violent but very short. The pirates and the bank robbers shared the same problem, once they caused enough damage, the involved governments made the necessary effort to eliminate the problem.

Sadly, the writers clearly have no interest in the fascinating history of the golden age of piracy. The historical narrative that caused the increase in piracy is not complicated. Black Sails could have been Spartacus on ships, instead it is merely an enjoyable melodrama.