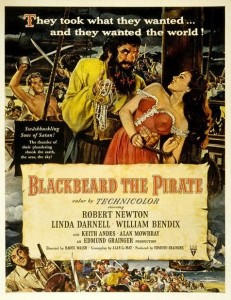 Henry Morgan (Torin Thatcher), a former pirate, has been ordered to crack down on the pirates who have overrun the Caribbean. Suspecting that Morgan is actually working with the pirates, the governor of Jamaica has offered a reward, so Robert Maynard (Keith Andes) joins Blackbeard’s (Robert Newton) crew to gain evidence. Maynard soon falls in love with Edwina Mansfield (Linda Darnell), who had stolen Morgan’s treasure from Panama, but soon loses it to Blackbeard. Facing capture by Morgan, Blackbeard fakes his death. Meanwhile, Maynard had sent his partner to Jamaica with proof that Morgan was dealing with pirates, but Morgan simply arrested the governor. Since Morgan will throw Maynard into prison, the young lovers run away together but are captured by Blackbeard. Morgan lures Blackbeard into a trap, but is forced to let the pirate sail away when he sees that Mansfield is a prisoner. Tired of Blackbeard’s repeated betrayals, the crew finally revolts, enabling the lovers to escape.

Although Blackbeard operated roughly fifty years after Henry Morgan, he has been placed in Morgan’s era. To be honest, the movie is such a mess that it does not really matter.

The situation with Morgan is confusing. The opening introduction states that Morgan is serving the king now, implying that he had been a pirate before. The real Morgan had been a privateer, basically a licensed pirate, on behalf of the English crown, leading numerous raids against Spanish ports. While the raids did not always have official support, he was never considered a pirate by the English government. Although Spanish pressure forced Charles II to arrest Morgan, he was soon released and appointed deputy governor of Jamaica. Admittedly, members of the legislature in Jamaica claimed that the real Morgan was aiding former comrades who had not given up the pirate life, but the governor never offered a reward for information proving that Morgan was an accomplice, nor did Morgan ever seize power and arrest the governor. I have a horrible feeling that I spent more time explaining the historical accuracy of the script than the writer did researching the script.

Everyone is scheming to get Morgan’s treasure from the raid on Panama. While the real Morgan’s share of the raid on Panama was a small fortune, he did not keep it locked up in a tower so he could swim in it like Scrooge McDuck. Instead, he invested it in a plantation. Morgan had become a privateer to become rich, and he succeeded since he had a total of three plantations by the time he retired from the privateering industry. The majority of his followers invested their shares in rum and whores in Port Royal.

The genuine Blackbeard was killed during a battle with Royal Navy sailors commanded by Lieutenant Robert Maynard. Blackbeard had taken a general pardon and officially retired from piracy, but he had actually made a deal with the governor of the North Carolina colony where he would hijack ships, and their cargoes would be fenced by friends of the governor, who would prevent any investigations. However, the governor of the neighboring Virginia colony became aware of Blackbeard’s extracurricular activities and convinced the captains of two Royal Navy warships to lead a covert mission to arrest Blackbeard. Invading a colony to arrest a man who had committed no crimes was risky, but the entire operation was intended to distract attention from the Virginia legislature’s investigation into his own corrupt land dealings.

Viewers will not really learn anything about the period but they will be entertained. Robert Newton is simply awesome as Blackbeard, which is a continuation of his performance as Long John Silver in Treasure Island two years earlier. Incapable of talking like ordinary people, he growls every single sentence, even if he is merely asking for another bottle. Most of his vocabulary consists of Arr and Belike. Pretty much everything that Blackbeard does is fun to watch, especially his attempts to get Mansfield’s maid drunk to find out where the treasure is hidden.

Blackbeard routinely buries treasure because that is what pirates do apparently, although he adds a personal touch and puts a dead body on top to look like a grave. I realize that buried treasure is a staple of pirate movies, but it makes no sense. Pirates and buccaneers risked their lives to steal other people’s money, which would enable them to live large for a period of time, but screen pirates routinely sail to some tiny island, dig a hole near a landmark like a rock shaped like a barrel and toss in the treasure, presumably as a retirement fund, which is understandable since the banking system was in its infancy.

The ship is a great set, but it is unbelievably stable, as if the studio could not afford a machine to move it up and down.

The script goes all over the place. Blackbeard is killed, the lovers sail off into the sunset but the entire subplot of Morgan taking over Jamaica is unresolved, and basically forgotten. The constant treachery is entertaining but a bit overdone. Still, it is a surprisingly fun movie, and parts of the story are accurate.