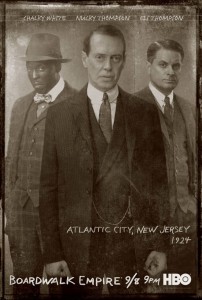 Actually, the number of dead or departed characters approached Game of Thrones-levels. In previous seasons, a handful of characters would be killed off or leave the show each season, but this season I had to take off my shoes and socks to count all of the characters who are gone.

Last season, Enoch “Nucky” Thompson (Steve Buscemi) had to defend his control of Atlantic City against the rapacious Gyp Rosetti (Bobby Cannavale), a powerful New York City gangster. This season, Chalkie White (Michael Kenneth Williams) faces the threat of Doctor Valentin Narcisse (Jeffrey Wright), a gangster from Harlem, who plans to expand into Atlantic City. The series’ focus on social issues saves it from being a dressy version of The Sopranos. Usually women’s rights are examined because of Margaret Thompson’s (Kelly MacDonald) character, but this season dealt with blacks’ position in society. 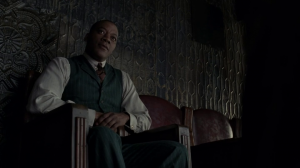 Much as I will miss Dunn Purnsley (Erik LaRay Harvey), the storyline of Doctor Narcisse’s attempt to take over Chalkie’s territory was fascinating. Honestly, it should have received even more screen time. At first glance, Narcisse is simply another psychotic villain, outwardly more restrained than Gyp Rosetti, but still crazy. However, he is the first character on the show to question the social order that made African-Americans second-class citizens. Unfortunately, Narcisse is such a repulsive character that the audience’s sympathy is drawn to Chalkie, who does not believe that it is possible to actually change the system. 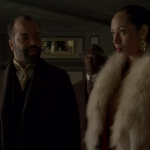 Actually, it is unfair to say that the issue of black rights was ignored by all of the white characters. J. Edgar Hoover, acting director of the Bureau of Investigation (forerunner of the FBI), was extremely interested in the issue of civil rights for blacks, but he was fixated on keeping blacks subservient.

Negroes with ideas in their heads are a threat worth worrying about. 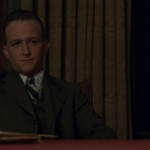 Although J. Edgar Hoover (Eric Ladin) was obsessed with crushing any form of black nationalism or advocacy for equal rights, his portrayal is off. The real man was famous for a rapid-fire delivery, intended to ensure that other people had no opening to present a different opinion or facts that would contradict his position. More important, Hoover kept his bureau hermetically sealed from the much larger and corruption-ridden Prohibition Bureau, and he was too junior to send undercover agents against senior Prohibition agents. It is true that he famously denied the existence of a large network of criminal organizations, but it was not really an issue in 1924 because the network did not yet exist, it was still being born.

Four seasons into the show, several characters find that their sins have caught up with them. 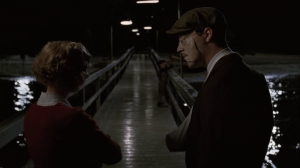 Eddie Kessler (Anthony Laciura), Nucky’s faithful butler, was finally brought to the front of the stage, given a backstory, and then made a permanent yet touching exit from the show. Richard Harrow’s (Jack Huston) story has also come to its conclusion. Although the unlikely romance between Richard and Julia Sagorsky (Wrenn Schmidt) warmed my Grinch-like heart, it had to end badly. Despite Harrow’s innocent exterior, he had taken the lives of far too many men to settle down to domestic bliss with the family he had always wanted.

Goodbye Gillian, we will always have the memories. Twisted, disturbing, nightmarish memories. 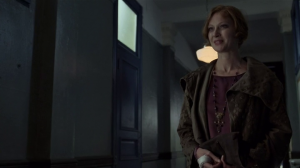 While I always nervously waited to see what new weirdness the writers would put Gillian Darmody (Gretchen Mol) through, her character arc had come to its inevitable, tragic finale. It was impossible that she could ever live happily ever after given what had been done to her and what she had done. To sum up: she was raped when she was twelve; gave birth when she was thirteen; eventually had sex with her son; tried to poison the man who had raped her; then reconciled with him to get his fortune; watched her son murder his father; learned that her son had been executed by a rival gangster; seduced and then murdered a man who looked like her son in order to declare her son legally dead and obtain his wealth; attempted to pass herself off as her grandson’s mother; and finally became a heroin addict. Really, there is nothing left, except respect for Gretchen Mol.

The guard is changing. The younger gangsters are taking over. 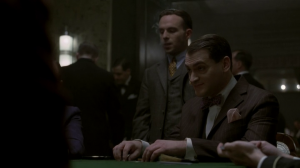 The end of the partnership between Meyer Lansky (Anatol Yusef) and Charles “Lucky” Luciano (Vincent Piazza) foreshadows the revolt of the young gangsters like Luciano against dinosaurs like Joe Masseria (Ivo Nandi), who refused to work with anyone outside of their narrow, clannish world. Boardwalk Empire gives Masseria his due, he was a giant among the gangsters.

While Luciano reluctantly returns to the limited ecosystem of Masseria, Lansky steps out from Arnold Rothstein’s (Michael Stuhlbarg) shadow and becomes an equal partner with Nucky. The writers show the destructive side of Rothstein’s gambling addiction, putting his eventual murder in 1928 into context.

Do there have to be good gangsters? 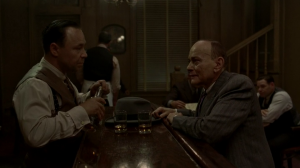 The death of Dean O’Banion, leader of the predominantly Irish North Side gang in Chicago, was surprisingly accurate, including his constant provocation of Johnny Torrio (Greg Antonacci). However, Al Capone (Stephen Graham) was not trying to take Torrio’s place, their syndicate had just started to expand into Cicero, so his role was still growing. Actually, the entire takeover of Cicero was toned down. While I enjoyed the sight of Al Capone receiving a much-deserved beating from the factory workers whom he was trying to intimidate, the real takeover of Cicero was far more brutal than the whitewashed version on the show.

When newly elected Chicago mayor William Dever, a reformist, cracked down hard on bootlegging, gambling, and brothels in 1923, Torrio and Capone made nearby Cicero their base of operations. Two hundred goons, including thugs borrowed from friendly gangs in Chicago, were employed to ensure the election of a compliant mayor during the election in Cicero on April 1, 1924, beating and shooting any election officials who tried to stand up to them. While the opposition had made a similar arrangement with rival gangsters, they were completely outnumbered. After four men were killed, outraged Cicero citizens persuaded a judge to deputize two hundred Chicago policemen. Since the deputized policemen were not wearing uniforms, Capone’s brother Frank mistook a group of them for rival gangsters and opened fire. He died in the shootout, while Capone himself barely escaped. The battle between the police and the gangsters lasted all afternoon, but Torrio’s syndicate managed to get their candidate elected. The town soon had more than a hundred gambling dens, hundreds of bars, and a hundred brothels, many of which were under the control of Torrio’s syndicate. 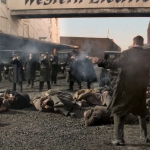 For reasons known only to the writers, it appears that Capone’s brother Frank (Morgan Spector) was assassinated, rather than killed in a gunfight with police officers. Suggesting that he was deliberately targeted by Capone’s rivals ignores the efforts made by the citizens of Cicero and the police to stop the gangsters.

Love is in the air for Nucky. Again. 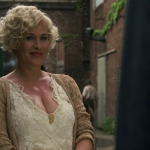 Nucky’s estranged wife Margaret is back, I suspect because Kelly MacDonald is under contract, but Margaret is my favorite character and her handful of scenes are fun. After Nucky’s attempt to re-establish some form of connection failed, he finds a new girlfriend, Sally Wheet (Patricia Arquette), someone closer to his own age for once. To be fair, Sally seems like the perfect match, someone who can stand up to him and accepts the nature of his business. Also, I dig the way she expresses interest in a man.

The season set a new record for dead and departed characters, so the writers had to introduce new characters.

The new characters were a mixed bag. Sally Wheet is hilarious, but I am not thrilled with Nucky’s nephew Willie Thompson (Ben Rosenfield). Ralph Capone (Domenick Lombardozzi) is fine, although every time he appears, I see Herk from The Wire wearing a really ugly wig. 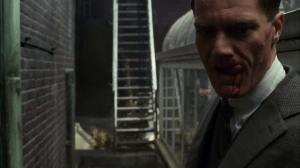 Since so many character have left the show, supporting characters Eli Thompson (Shia Whigham) and Nelson Van Alden/George Mueller (Michael Shannon) are both given much more screen time. Both men share bad luck and an inability to reign in their volatile tempers, but no one can express barely suppressed boiling rage like Shannon. His meek, hen-pecked Bruce Banner-like character, who is repeatedly slapped around by two separate but equally homicidal bosses, finally hulks out and smashes several puny tormentors. (If Shannon had displayed half of that rage in Man of Steel, it might have been a good movie. No, it still would have been a sexist piece of crap.)

The final scene is a sorrowful montage of deep disappointment, revealing that unlike previous seasons where there were winners and losers, everyone lost something this season.