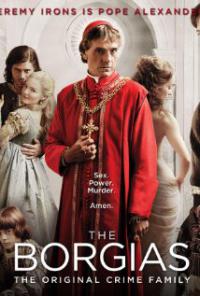 There is a new show that is surprisingly addictive due to its generous helpings of incest, intrigue, and shifting political alliances. Children are showered with love until they are old enough to be used to cement political alliances between noble families. At one point, an adolescent girl is married to a powerful yet brutal lord who treats her as a brood mare, rather than as a lover and partner. Unfortunately, this description fits HBO’s Game of Thrones, not Showtime’s The Borgias. Game of Thrones is based on the Hundred Years’ War and the War of the Roses in England, but is set in a fantasy world of astonishing depth. The Borgias is based on Renaissance Italy just after the end of the Hundred Years’ War and the War of the Roses but is set in the real world, although a world drained of passion and character.

Neil Jordan, creator of The Borgias, is clearly overwhelmed by the challenge of writing a television series. The episodes unfold with mind-numbing predictability and the actors seem to be going through the motions. Successful historical dramas like Rome, The Tudors, Deadwood, Band of Brothers, and The Pacific had one or two show runners to set the tone but farmed out the writing to other writers to keep the dialogue fresh, which is vital since two hour-long episodes are roughly equivalent to a movie. Thanks to this approach, television, especially the cable networks, are producing the best entertainment today, while the studios are increasingly relying on formulaic sequels and incoherent, explosion-filled event movies.

The show’s main strength, and to be honest, its only strength, is that it presents history in a manner that could be understood by a child. Literally. At one point, Pope Borgia uses a map of Italy to explain the political situation to his youngest son. The series is filled with scenes where the Pope and his eldest son and closest adviser, Cesare, review the Papacy’s position within complex political situation of the Italian city-states. At this point, it would not seem out of place if Cesare did a Power Point-type presentation with scrolls, maps and SWOT analysis. There is no denying that it is extremely difficult to write scenes without falling into the trap of lecturing the audience, which is why you either need good writers and actors capable of delivering the dialogue (Swearingen’s stream-of-consciousness monologues in Deadwood come to mind), or the innovative use of graphics and visuals to tell a story (every episode of The Pacific opened with a map showing showing the decreasing amount of territory held by the Japanese).

While recent popes have been media superstars, if controversial public figures, they are lightweights when compared to the popes of the Renaissance. The threat of excommunication was terrifying, since it meant banishment from the community. The all-encompassing nature of the Church is hard for modern people to understand, given the huge selection of faiths to satisfy even the most discriminating worshipper. Today, an individual seeking the guidance of an omnipotent being can choose Christianity (Catholic, Anglican, Calvinist, Unitarian, Pentecostal, Lutheran, Presbyterian, Methodist, Mormon or Greek Orthodox), Judaism (Orthodox, Conservative and Reform), Islam (Sunni [Hanafi, Maliki, Shaf’i, Hanbali or Salafism], Shiite [Jafari, Ismailiyah, Zaiddiyah, Alani or Alevi], Sufism, Kraijite or Kalam), Hinduism (Shaivism, Shaktism, Vaishnavism, Smartism, Shrautism and Bhakti), Buddhism (Theravada, Mahayana and Vajrayan), Daoism (Tianshi Dao, Shangqing, Lingbao, Quanzhen Dao, Zhengyi Dao or Wuliu Pai) or Falun Gong, to mention a few. At that time in Europe, there was only the Church, although Jews were accepted with varying degrees of tolerance. The English Reformation and separation from the Church occurred after Borgia’s papacy, but the initial struggles to rein in Henry VIII and the conditions that led to the Protestant Reformation took place at the same time.

The Tudors also dealt with the abuse of religion by corrupt members of the church and monarchs to either fill their empty treasuries or win the people’s favor. True believers struggled to preserve the ideals of the church against cynical manipulation but the series showed the dangers of pushing too hard against traditional beliefs. Admittedly, I have only seen the first five episodes of the Borgias but the series seems to be ignoring the meaty subject of religion in favor of the tawdry relationships within the Borgia family. Even when the show does address charismatic zealots like Savolorna, the sermons come across as flat, so the actors have to explain his effect on people, instead of letting the viewers experience it.

For a series set in medieval Italy where the main characters are always swishing around in bright red robes, the visuals are surprisingly unimaginative. Spartacus: Blood and Sand showed what could be done with computers and a bit of creativity. Neil Jordan seems to have missed the past decade.

Part of my frustration with The Borgias is due to my excitement that Michael Hirst would be the show runner. Hirst was the executive producer of The Tudors, which was excellent, and I looked forward to a show of similar quality set in Italy. I had expected that Neil Jordan would direct the premiere, like Martin Scorsese did in Boardwalk Empire and Michael Apted in Rome, to attract viewers, and then the regular show-runner would take over. Unfortunately, Hirst seems to be busy with the new version of Camelot, and Jordan seems to think that he knows how to run a TV show. He doesn’t.

The Borgias is history made two-dimensional. The best that I can say about the show is that it is relatively accurate and there are worse ways of learning history.