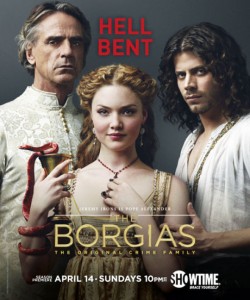 Oh, happy day, it has been cancelled, ending my misery.

Back in the day when there were only one or two historical-themed shows a year, I would have appreciated The Borgias more, but now there are Boardwalk Empire, Hell on Wheels, Mad Men, Copper, Vikings, and The White Queen, with Reign (about a teenage Mary, Queen of the Scots), Turn (the rebels’ spy ring during the American Revolution), Mob City (Frank Darabont’s show about Mickey Cohen, which I am really looking forward to), and Outlander (about a woman transported back in time from 1945 to Scotland during the time of Robert the Bruce) coming soon.

The previous season ended with a cliffhanger as Cardinal della Rovere’s (Colm Feore) plot to poison Rodrigo Borgia/Pope Alexander VI (Jeremy Irons) appeared to have succeeded. Thanks to quick thinking by his daughter Lucrezia (Holliday Grainger), the poison’s spread is stopped but his life hangs in the balance. The cardinals gather around his deathbed and bargain for votes to replace him. Since the Pope is the lead character and the series is not based on books by George R. R. Martin, it should not come as a surprise that he recovers. Although the poison attempt is completely fictional, the scenes of cardinals crowded in the Pope’s bedroom muttering as they haggle over the price of their votes is one of the better parts of the season. 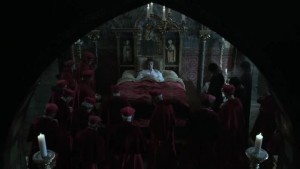 Only a Borgia can love another Borgia. 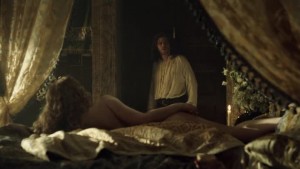 The incest question is dealt with, and while it was not my favorite part of the show, it did produce a memorable line: “It seems that only a Borgia can love another Borgia.”

There is a new Big Bad.

Since Cardinal della Rovere’s attempt to poison the Pope failed, he was replaced as the Big Bad by Caterina Sforza (Gina McKee), a more believable threat. Actually the Pope had made a lot of enemies, and he survives three assassination attempts during the season, even dispatching one would-be murderer after a lengthy bout of hand-to-hand combat filmed in slow-motion. Actually, there are several scenes filmed in slow-motion, in particular a scene of two men running to escape an explosion, always a sign of a creative filmmaker. 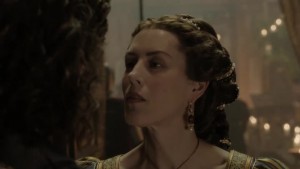 Towards the end of the season, the Pope and his arch-nemesis Caterina Sforza compete to create the best fake relic, and thus separate the masses of pilgrims travelling to Rome for the Jubilee from their money. If the show had focused more on the cynicism and depravity of the church, it would have been far more interesting. Instead, it concentrated on the desire of the Borgia family to dominate Italy, and their feud with the Sforza dynasty.

You don’t want to be a Sforza on a Neal Jordan show. 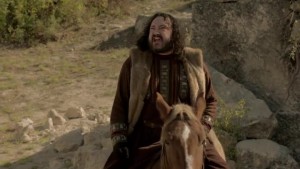 I don’t know if someone named Sforza ever did series creator Neal Jordan wrong, but he sure has a hard-on against the Sforza dynasty, since several screen members of the dynasty were killed off years before they actually died. Although the annulment of the marriage between Giovanni Sforza (Ronan Vibert), the Lord of Pesaro, and Lucretia Borgia was presented accurately, including his refusal to prove his sexual potency in a public ceremony, he is murdered by the screen Cesare only a few months after the annulment, even though he actually outlived the pope. Ludivico Sforza (Ivan Kaye), duke of Milan, is also assassinated by Cesare, eight years before the real man’s death in a French prison. Ludivico was the patron of Leonardo da Vinci, but the series focused on Rome, so the sole appearance of da Vinci is his workshop. Finally, Caterina’s son was not killed by Cesare. Having married three times, Caterina had a large number of children, and they all survived her tumultuous conflict with the Borgia Pope.

On the surface, this may seem to be pedantic whining about dates, but the point is that Jordan wanted to show that the Borgias wreaked vengeance on everyone and anyone who threatened their family. Except they did not always win against their rivals. Instead, they simply survived in a cut-throat environment.

Once again, it needs to be said. Neal Jordan does not know how to run a cable television show. 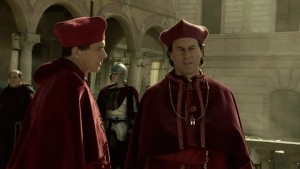 Jordan seems uninterested in any of the bit players, they appear simply for as long as they are needed for the plot, but are never given the opportunity to become nuanced, believable characters. Cable television attracts talented actors because they are given the time to build rich characters, but Jordan never seemed to embrace the pace of cable television. The most glaring example is Cardinal Ascanio Sforza (Peter Sullivan), the Pope’s political fixer, who is cynical but bland, as if all of the life has been squeezed out of him. Varys, Tyrion and Littlefinger on Game of Thrones are all a delight to watch because they genuinely enjoy plotting. Cardinal Sforza reminds me of people who eat simply for nourishment but take no joy in a well-cooked meal. Niccolo Machiavelli (Julian Bleach) has brief appearances in two episodes but he should have been used more, especially since he later cited Cesare Borgia as an example of an effective prince in his book The Prince.

Cesare is the world’s oldest teenager. 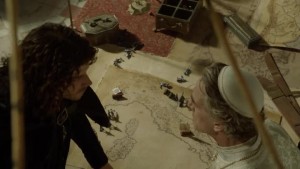 Cesare and the Pope

Viewers of the show will not understand why Machiavelli was so impressed with Cesar. Seriously, Cesare constantly sulks and throws fits whenever his father will not give him what he wants. After three seasons of Cesare’s tantrums because his father won’t give him him command of the Papal armies, you would think that his father would simply sit him down for a chat, and explain that he will never get anywhere with that attitude. Well, the Pope never has the opportunity because Cesare makes a deal with the French king to invade Italy to attack the city-states held by members of the Sforza dynasty. The merits of the plan seem debatable, since the Borgias will lose an enemy but gain a frenemy. Louis XII did invade Italy in 1499 to claim Milan, but he had first made an alliance with the Republic of Savoy, Venice and the Pope. In the show, Cesare makes the deal without consulting the Pope, who is furious that his son made a decision on his own. Basically, the scheming of the Borgias is reduced to a son’s efforts to deal with his daddy issues.

Italian politics were famous for their complexity, apparently too complex for Jordan. 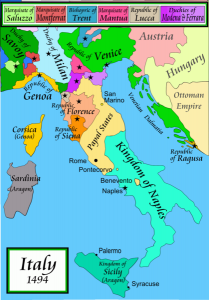 A key plot-line is the competition between the Pope and Caterina Sforza to win the allegiance of the leading condotteirro (mercenaries): Prospero Colonna, Gian Paolo Bagliona, Vitellozzo Vitelli, and Roberto and Paolo Orsini. After plotting and counter-plotting, Cesare convinces all five men to serve him, thus ensuring eventual Borgia victory. Honestly, it is tiring to repeatedly say it, but Jordan ignored the actual history. Colonna not only did not serve the Borgias but he helped defend Naples against the French; Pagliona did serve the Papal States but a couple of years after the French invasion; Vitelli served the Pope in 1500, while dates for the Orsini brothers are less clear.

Again, it seems nit-picking but my greatest criticism of the show is not that it is dull, which it is, but that Jordan ignored the fluid, constantly shifting nature of politics in Italy at the time. Milan, Florence, Naples, Venice, Savoy, and Rome were all independent kingdoms and duchies that were constantly plotting against each other, and making alliances of convenience, which would be broken as soon as the situation changed. Occasionally, several of them would band together against a greater threat of the more powerful nation-states of France and Spain that had designs and claims on the various Italian kingdoms, republics and duchies. Portraying the complexity of the situation was undeniably a daunting task, but no one forced Jordan to make the show.

Forget complex political machinations, the Pope has a magic spear. 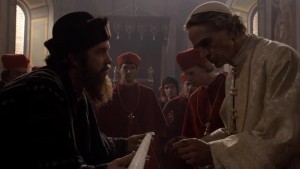 The Spear of Longinus

There would have been more time to deal with the above-mentioned political flux if Jordan had not spent so much time focusing on a petition by Jews from the Ottoman Empire who sought refuge in Rome. I have to admit, the Pope was a shrewd bargainer. In exchange for the right to live in Rome, they provided him with the Spear of Longinus (which pierced the side of Jesus Christ while he was hanging on the cross), arranged for the entire Turkish fleet to be destroyed while in harbor, and purchased the global supply of salt-peter, the key ingredient for gunpowder, thus leaving his enemies defenceless. While I sympathize with Jordan’s desire to highlight the oppression suffered by the Jews at the time, none of it happened. Sometimes, I wish that Jordan had just changed the names but kept the basic sequence of events. It would have been less annoying. I also wish that he had added dragons.

Okay, parts of the season were good. Small, brief parts. 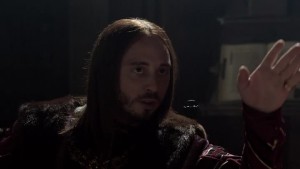 To be fair, every scene with Caterina Sfzorza was good. Gina McKee made the third season worth watching. The Banquet of Chestnuts actually happened a couple of years after the time depicted on the show, but that is a minor quibble. Apparently, it proceeded exactly as shown, where the cardinals were entertained by fifty high-priced courtesans with competitions to determine which cardinal was the most virile. As I mentioned earlier, the scenes of cardinals bargaining while standing around the Pope’s bed while waiting for him to die was worth watching, and was one of the few accurate parts of the show. Although the entire series of assassinations and schemes to install a pliant king on the throne of Naples to enable Lucretia to keep her bastard son with her is imaginary, the two kings of Naples are entertaining, especially the one who brought snacks to watch his nephew consummate the marriage with Lucretia.

Anyway, it is over, and I won’t miss it. The best that I can say is that viewers will have learned the basic facts about the Borgia Papacy. Except for everything that was made up by Jordan.