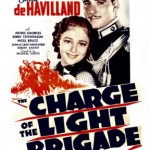 The swashbuckler Captain Blood (1935) had jump-started the careers of Errol Flynn, Olivia de Haviland and director Michael Curtiz. The Charge of Light Brigade reunited them a year later, but sad to say, the movie lacks the same spark. Set during the Crimean War (1853-1856), the movie also incorporates a fictionalized version of the Indian Rebellion of 1857.

Annoyed that the British government has cancelled a subsidy that had been paid to his foster father, Surat Khan (C. Henry Gordon), amir of Suristan, stirs up trouble with his neighbors, and openly flirts with Russia to make England treat him better. Major Geoffrey Vickers (Errol Flyn) is assigned to Chutokai, a fort on the Northwest Frontier, guarding a pass into Suristan. Since war in the Crimea seems likely, the commander of the fort had been ordered to ignore Surat Khan’s provocations. Taking advantage of the absence of most of the garrison, the Khan’s army forces the outnumbered garrison to surrender after a brief siege. Even though Surat Khan shakes hands like a gentleman, Vickers does not trust his promise to let the garrison leave. Rightly so, since Khan’s men start shooting when they are out in the open. Only Geoffrey and his fiancee Elsa (Olivia de Havilland) escape, the survivors are captured. Returning with the Lahora garrison, Geoffrey finds Surat Khan gone and the hostages massacred. 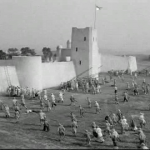 Meanwhile, England is pouring men into the Crimea to oppose the Russian hordes. Aware that Surat Khan had found refuge in Russia, the British troops from India thirst for the opportunity to avenge their comrades and kill the treacherous swine. Frustrated that the allied command will not risk a direct attack on the Russian artillery at Balaclava, even though Surat Khan is there, Vickers deliberately alters the order, sending the Light Brigade to attack the Russian artillery. The Light Brigade charges and the massacre is finally avenged. 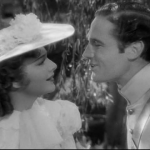 Naturally, there is a romantic triangle, but to my surprise Flynn is the loser. I know, I know, it makes no sense. It turns out that Elsa has fallen in love with Geoffrey’s younger brother Perry (Patric Knowles) even though she is engaged to Geoffrey. Let’s be honest, Perry is boring. Worse, he is assigned to the Political Department, so he is not even a real soldier like Geoffrey.

Unlike her usual fiery self, de Havilland seems uncomfortable throughout the entire film, as if she knows that she should be Flynn’s love interest, they are such a great match. However, it was only their second pairing, so the error is understandable, but it was never repeated in the remaining six movies they made together.

Just as Geoffrey is preparing to go to the Crimea, Elsa finally tells him that she loves his brother, and he accepts the situation very gracefully. I will say one thing, she is consistent. Even though Geoffrey had saved her life, she remains true to his brother, not her fiancee. Actually, it was probably a bit radical in 1936, and would have meant social embarrassment in the real India. 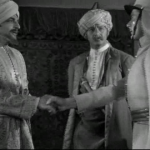 Surat Khan’s revolt makes no sense. No, really, no sense at all. During the parley with Surat Khan at Chutokai, Geoffrey Vickers points out that he may have captured one fort, but he now faces the might of the entire British army in India. This is not typical imperial blustering to a native but a factual description of the situation. In the real rebellion, revolts had sprung up across India, but in the film’s version of the rebellion, he never would have been able to keep the fort since he was the only Indian ruler to rebel. In the end, Surat Khan occupied the fort for a few days but lost his kingdom. What did he actually want? Distract the British while the Russians bullied the Turks? Who knows, it is never explained by the script, and presumably the writer did not care. 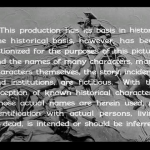 The portrayal of the Siege of Chutoki is an accurate version of the Siege of Cawnpore that took place during the Indian Rebellion of 1857. Suristan does not exist, but Surat Khan is obviously modelled on Nana Sahib, who had lost his pension for the same reason and led the forces that captured Cawnpore. Although the events are obviously modelled on the Rebellion, the sepoys (Indian soldiers) remain loyal, and the khan’s revolt is an isolated incident, encouraged by the Russians. Furthermore, there is no evidence that the massacre was planned by Nana Sahib. The script is a mess because the original screenplay had included the Indian Rebellion until someone apparently looked in an encyclopedia and noticed that the Rebellion had happened several years after the Battle of Balaclava, so Cawnpore was quickly changed to Chutokai, but the rest of the script seems to have stayed the same. 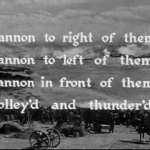 While the film’s version of the Siege of Cawnpore is quite faithful to history, the script is less successful with the climatic charge of the light brigade. In the film’s version, the allied commanders meet and decide to withdraw the Light Brigade. Sent to deliver the message, Geoffrey changes the order, but the charge is later viewed as a blunder that turned the tide, resulting in a British victory.

Despite the movie’s happy ending, the real battle was a Russian victory. The attack was due to a misunderstanding of an order delivered verbally, which caused the Light Brigade to attack the wrong part of the Russian lines. Moreover, the charge did not result in a victory, just a waste of men’s lives. Shocked by the heavy losses, the British did not launch another attack. There is little excuse for the inaccurate portrayal, since Lord Raglan, overall commander of the British forces, Lord Lucan, commander of the British cavalry, and Lord Cardigan, commander of the Light Brigade, all survived the battle, and engaged in a lengthy and public debate over who was to blame, but the script presents a more gallant explanation of the doomed charge.

As someone who had to memorize the poem during high school, I appreciate the decision to use the poem to explain what is happening during the charge.

It may be a bit callous of me, but I wonder if Geoffrey Vickers would have been so willing to throw away his life if Elsa had not rejected him? 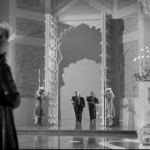 While the script is a crazy mess, it is a beautiful movie. The sets are astonishingly lavish, as only Hollywood in its prime could produce. In particular, the leopard hunt hosted by Surant Khan is quite interesting. It is cool to see the beaters flush out leopards by literally beating the bush and banging drums, while the hunters shoot from on top of elephants.

Furthermore, there is a good scene of sepoys returning to Chutokai and running through the fort calling out the names of their loved ones, unaware that their families had been massacred. 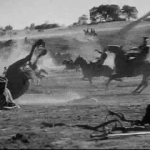 Unfortunately, the movie is probably best-known for the death of many animals. The admittedly impressive scene of the charge of the Light Brigade had such an effect because of the liberal use of tripwires, which caused the death of a disturbing number of horses. In fact, so many horses died that Congress passed a law requiring the studios to ensure the safety of animals in their films, which led to the now-familiar notice at the end of films stating that no animals were harmed in the making of this film.

I hate to say it, but The Charge of the Light Brigade is really not a good movie, and I usually like anything with Errol Flynn. This is especially irritating since there are few films about the Indian Rebellion and fewer about the Crimean War.

This is my entry in the British Empire Blogathon hosted by Phantom Empires and The Stalking Moon. 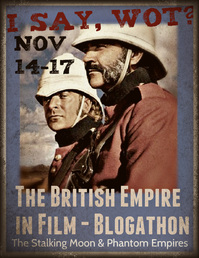