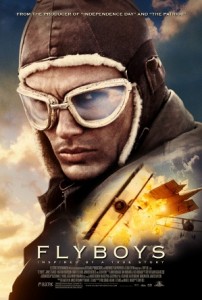 In 1916, a small group of Americans join the Lafayette Escadrile: Blaine Rawlings (James Franco) had to leave town after beating the banker who had foreclosed on his ranch; Eugene Skinner (Abdul Salis), an African-American boxer, enlisted because France has treated him better than his own country; William Jensen (Phillip Winchester) enlisted because all of the men in his family have fought in wars; Briggs Lowry (Tyler Labine) joined because his rich father made him, hoping that he would find direction; and Beagle (David Ellison) is on the run after robbing a bank. Although the escadrile is commanded by Captain Georges Thenault (Jean Reno), the new recruits serve under a grizzled veteran, Reed Cassidy (Martin Henderson), who obsessively hunts an evil German pilot. Rawlings quickly falls in love with a local girl, Lucienne (Jennifer Drecker), and unexpectedly finds himself playing a leadership role.

Inspired by the true story. There is a lot of wriggle-room in that sentence.

To be fair, viewers will actually learn a little about the war. The training sequence is quite good, and is probably better than the training the real pilots received. Thenault explains that the pilots wore silk scarves because they were always turning their heads looking for the enemy. Cassidy gives them pistols to shoot themselves in case their planes catch fire, since they don’t have parachutes.

The movie gets most of the basic facts right. Thenault was the actual commander of the real squadron. The escadrille did have a lion, Whiskey, as a mascot. In fact, it had two lions, the second was named Soda. However, the lions were moved to a zoo after a playful Whiskey knocked Thenault down into the mud, and started chewing on his cap.

There is a good shot of the abrupt transformation from peaceful farmland to the front. Since the front did not move for most of the war, the area behind it remained untouched.

The script captures the real pilots’ heavy drinking and endless discussions about the merits of various types of planes, but it does not show that how rapidly technology advanced in WWI. The introduction of a new model would give one side a temporary advantage for a few months until the other side introduced a newer plane that could fly faster or was more manueverable.

Skinner is clearly based on Eugene Bullard, a black American who had moved to France to escape racial discrimination, and fought for France, first in the Foreign Legion, and then in the Lafayette Flying Corps. The script acknowledges the rampant racism in the United States, admitting that Skinner was not allowed to fly in the American air force after the United States entered the war.

Speaking of the Lafayette Flying Corps, where is the corps? The movie covers the period from 1916 to America’s entrance into the war in 1917, but the dwindling group of pilots in the escadrile seem to be the only American pilots in France. In reality, the escadrile was so popular that it was expanded into a corps. Presumably, the writers chose to focus on a small group of characters, but would it have hurt to mention the Lafayette Corps?

To be honest, the film is not about the real Lafayette Escadrille, it is just a generic WWI aviation film that happens to feature Americans fighting for France. Cassidy is the squadron commanding officer because every single other veteran is dead, which is ridiculous. It gets worse. Meeting the new recruits for the first time, the veteran Cassidy informs them that their life expectancy is three to six weeks. The Lafayette Escadrille took losses, but it was not the Suicide Squad. I suspect that there are no other experienced pilots in the squadron other than Cassidy because the script focuses on the young stars, and experienced pilots would have distracted from the young heroes’ story.

However, the amazing aerial combat scenes are the movie’s strength. In particular, a battle against a zeppelin, which is heading for Paris, is simply stunning. Unfortunately, the movie does not explain that the zeppelins’ main advantage was their ability to bomb from such a height that the fighters had trouble climbing high enough to actually shoot at them. Zeppelins did bomb high-profile civilian targets like London and Paris, but the attacks usually took place at night because the greatest threat to the zeppelins was anti-aircraft fire, not fighter planes. Still, it is a cool scene, and it is nice to see the huge size of the zeppelins.

Despite the constant repetition that they are knights of the air, the idea that aces routinely fought duels is more than a bit of an exaggeration. Most aces died because they were exhausted or were surrounded, not in duels.

Flyboys was made early in James Franco’s career, and he was not ready to play the lead. Nor is he believable as a bad boy. However, the writers did their best to give Rawlins as many opportunities to be heroic as possible. Learning that the Germans have penetrated French territory, Rawlings makes a nighttime flight to evacuate Lucienne, who had chosen to be rescued by the hero, instead of simply leaving with the rest of the refugees. The escape from the Germans who have taken over her house is probably supposed to be thrilling, but it is merely blah.

The romance is a little boring, although I appreciate Lucienne’s efforts to fight her growing attraction to Rawlings, aware that he will either die or leave. The language barrier is nice, but it is sad that he can not say a single word in French. Apparently, an American hero can not be expected to learn French. Instead, Lucienne has to make the effort to prepare what she wants to say in English. One of the few good parts about Lafayette Escadrile (1958), which covered the same unit, was that both of the lovers were struggling with the other’s language. I like the French adjutant’s comment, “typical Americans, they come here but can not speak French.”

While the use of the newsreel to introduce the escadrille at the beginning of the film is good, the script does not deserve an award for originality. A rebellious loner learns to lead; war threatens to separate young lovers; a pilot must conquer his fear; and a racist learns to respect a black comrade. There is a even good German ace and a bad German ace. At least the racist is a rich easterner, not a southern redneck, which is a nice change of pace

Jean Reno is good but wasted as the the weary commander, who has seen far too many young men fly off and fail to return.

The film is gorgeous, and the producers clearly loved flying since the movie shows several types of bombers and even a zeppelin. Unfortunately, the amazing aerial footage is not matched by the cliché-ridden screenplay.