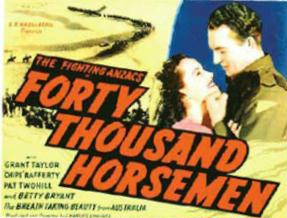 When Turkey entered WWI as an ally of Germany in November 1914, the British possessions in the Middle East were suddenly vulnerable. After repulsing Turkish attempts to invade British-controlled Egypt and capture the Suez Canal, which connected Britain with India, the British drove the Turks out of the Egyptian Sinai Peninsula in late 1916. The Turkish army fell back to Palestine and built a twenty-five-mile-long series of fortifications with five bases: Gaza, Djenmach, Tel-es-Sheria, Beersheba and Ramleh, that prevented the British from reaching vital water supplies and linking up with the Arabs that had revolted against the Ottoman Empire in early 1916. Frustrated by the apparent inability of the Allies to gain ground on the Western Front, the new British government of David Lloyd George pressed the army to move into Gaza, hoping that a successful invasion of Palestine would improve the revolt’s chances.

By early 1917, the British campaign in Palestine was producing few results, other than a disturbingly long casualty list. General Edmund Allenby decided to feint at Gaza and strike at Beersheba. To encourage the Turks to fall for the feint, Major Richard Meinertzhagen, Allenby’s intelligence officer, executed a ruse where a haversack with apparently genuine plans for an attack on Gaza was allowed to fall into the Turks’ hands. The British infantry attacked the main defensive lines at Beersheba while the Desert Mounted Corps (including the Australian Light Horse) circled around to hit the rear from the desert, making the last large-scale cavalry charge, and capturing Beersheba.

In Jerusalem in 1916, German troops commanded by Von Schiller (Eric Reiman) arrest Paul Bourget, a French wine merchant who is suspected of sending information to the Allies, and hang Bourget in his own shop. Bourget’s daughter Juliet (Betty Bryant) escapes with the aid of Sheikh Abu (Albert Winn), a friend of her father, who pretends that she is his son. Unfortunately, he is selling information to the Germans, while secretly working for the Allies, and the suspicious officer takes her as a hostage.

Meanwhile, three members of the Australian Light Horse, Red Gallagher (Grant Taylor), Larry (Pat Twohill), and Jim (Chips Rafferty), are enjoying their leave in Cairo. The fun ends when the Turks suddenly attack Romani, and they are sent to rescue the British garrison. The shiekh warns the outnumbered Australians of a Turkish attack, enabling the Australians to drive off the Turks during the three-day-long Battle of Romani. When a wounded Red is left behind, he is found by Bourget, who tends his wounds, and then leaves with the retreating Turks. Later, the troops arrive in her town, and Bourget runs into Red again but their courtship is very brief, because the Australians are soon marching on Gaza. Captured during the bloody fighting for Gaza, Red is sentenced to hard labor, but he learns of the plan to blow up Bersheeba. Meanwhile, the Australian Light Horse is planning to attack the rear of Beersheba, unaware that the town is a trap.

The movie is wartime propaganda, but even so, it is excessive. The Germans are evil, the Turks are honorable and reluctant lackeys of the Germans, the Australians are brave and fun-loving, and there is no mention of the Arab Revolt.

When the German general expresses contempt for the Australian troops, the senior Turkish officer defends the fighting ability of the Australians, pointing out that the Turks broke two armies trying to drive off a handful of Australians at Gallipoli. Pride in the Australians fighting at Gallipoli helped unite the separate states of Australia into one nation, but there were considerably more than a handful of Australians involved, and they did not fight alone. Two division of ANZACs along with a British division and a French division had taken part in the invasion of Gallipoli, opposed by slightly more Turks, but the landing had been bungled by the planners. The Allied force gained control of two beachheads, one occupied by the ANZACs, at the tip of the peninsula but three consecutive battles and thousands of dead proved that neither side could push the other back.

The script follows the chronology of events but every attempt is made to show that the plucky Australians won even though they were always outnumbered. While the British and ANZACs did win the Battle of Romani, the numbers were roughly even. Moreover, the British victory was due to the hard work building a railroad connecting Cairo with Romani, which enabled rapid reinforcement of the base, not a warning by an Arab double agent. In fact, stretched thin across the Middle East, the Turks were usually the underdog.

To say that the movie is unabashed in its patriotism is a major understatement. However, the patriotism should not be a surprise since director Charles Chauvel was the nephew of Sir Harry Chauvel, the commander of the Australian Light Horse during the Sinai and Palestine Campaign, and filming took place in the summer of 1940, after the surprising German Blitzkrieg. When a member of the trio grumbles about the heat and asks rhetorically what they are fighting for, one of his buddies responds that they are fighting to tell a boss that he can keep his job and to speak their mind in public. Stirring words, but more suitable to WWII, not WWI, where people still talked about King and Country.

Propaganda requires villains, but Turkey remained neutral during WWII and Nazi Germany had conquered all of Europe, so the Germans are placed in that role, even though the Germans treated their Turkish allies well in WWI. The demonization process, including scenes of German officers cracking the whip as artillery is pulled by Turkish soldiers instead of horses, is not subtle. When the Australians break through at Beersheba, the Turkish general nobly refuses to throw the switch to detonate explosives scattered throughout the town because his men will die as well, so he is shot by von Schiller, a proper monocle-wearing villain.

Despite the overt propaganda, the film is surprisingly entertaining. There are several scenes of light comedy between Bourget and the shiekh, who is determined to ensure that she is not molested by soldiers, any soldiers, German, Turrkish or Australian. At one point, Red and Bourget have to undress in the same room to dry their clothes, and the scene is surprisingly sexy for 1940. Surprisingly, marriage is never mentioned. Red admits that he has no idea what will happen next in his life, and Bourget replies that she does not care. It is even implied that they have sex, or perhaps I have a dirty mind.

The climatic charge is adequate, but does not compare to the charge in The Lighthorsemen (1987). In fact, there is no reason to watch this movie, unless you are a completist like me. Everyone else should spare themselves the boredom and watch The Lighthorsemen.

Forty Thousand Horsemen consists of fun-loving Australians taking advantage of local natives who are not too bright, and riding across endless stretches of desert to fight Turks who are actually decent but are ruled by tyrannical German warlords, while Waltzing Matilda is played repeatedly. Told through the viewpoint of the soldiers, the viewer will learn little about the war itself.