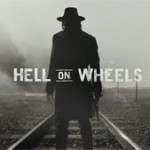 Most people turn up their noses at soap operas like General Hospital, Days of Our Lives, Dallas or Dynasty, but still want to become involved in the lives of people who are more attractive and lead more exciting lives. For those whose tastes run to Westerns, Hell on Wheels satisfies that desire. It certainly does not satisfy any desire to learn the history of the construction of the Transcontinental Railroad. To be fair, it is a very good soap opera.

Two competing railroads, the Union Pacific and the Central Pacific, raced to build the first transcontinental railroad in the United States. Originating in Council Bluffs, Iowa, the Union Pacific advanced westwards, while the Central Pacific started in Sacramento, California. The railroads were paid for each completed mile in government bonds and were given land grants along the route to help pay for the construction costs. The producers made the logical decision to focus on the Union Pacific, but the occasional image of the two rival railroads’ positions on a map would be nice. An ordinary map would be fine, there is no need for the visual extravaganza that is the title sequence of Game of Thrones. 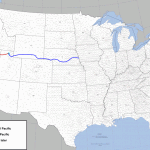 The railroad was not built by an ex-Confederate hunting the murderer of his wife, and the plucky widow of the original surveyor, who would be able to finish the railroad on schedule if they ever stop squabbling and accept their love for each other.

The original premise of the show was that Cullen Bohannon (Anson Mount) was working on the railroad while searching for the murderers of his wife. The vengeance storyline has been abandoned, and now he is in charge of building the railroad for Thomas “Doc” Durant (Colm Meaney), aided by Lily Bell (Dominique McElligott), whose husband was Durant’s original surveyor until he was killed by the Cheyenne. While it is entertaining to watch the sparks fly between Bohannon and Bell, their characters have no historical basis and Durant himself has been given a a far more hands-on role in the railroad’s construction than he deserves.

Although the fictional Durant is a wealthy manipulator who wants to become even richer, he is genuinely driven to build the railroad, and lives at the base camp, where he is wounded while battling a gang of robbers. Viewing the railroad as a wonderful way to make money by overcharging the Union Pacific for construction materials and supplies that were purchased from the Credit Mobilier of America construction company, which he controlled, the real Durant did not care if the railroad was ever completed. In fact, he spent almost all of his time in New York and Washington, where he oversaw the transfer of public money into his bank account and the accounts of sympathetic politicians. The real Durant was able to focus on stock manipulation, bribery, and lobbying because he had picked the right men to oversee the construction process. The Casement brothers, John and Dan, had been hired to manage the track laying process, and General Grenville Dodge, who had previously worked for Durant on another railroad, had been convinced to resign from the army to serve as chief engineer. None of these men have made an appearance on the show.

Hell on Wheels is to be praised for its honest depiction of race relations. 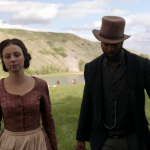 Actually, the theme that at least two of the couples can not have open relationships because it would not be accepted by the standards of the time, and would have violent, possibly fatal, consequences, makes for compelling stories. Elam Ferguson (Common) has taken over the Swede’s role as Durant’s enforcer, but is treated like a dog, useful but not equal to a human, by Durant. The Swede (Christopher Heyerdahl) kept order and collected protection money from all of the merchants but Elam simply sits around getting drunk and mooning over Eva (Robin McLeavy), although the struggle between his love for her and his fear of entrapment of any kind is a worthwhile storyline. Possessing an astonishing mix of inner strength and vulnerability, McLeavy has made Eva a fascinating character. The relationship between Ruth (Kasha Kropinski), Reverend Cole’s (Tom Noonan) daughter, and Joseph Black Moon (Eddie Spears) showed that racism was not limited to the African-Americans, but neither character was ever fully developed. It is hard to sympathize with Ruth, who appears to be a psychopath, since she tricks her alcoholic father out of his church, uses and discards Joseph, and then plays coy with Sean McGinnes (Ben Esler), one of the McGinnes brothers.

It may be a soap opera but it is a good one.

Criticism aside, I have to admit that I genuinely enjoy watching the show. Benefiting from a larger budget and a longer shooting schedule, this season’s episodes are smoother than the first season. Some scenes are simply beautiful, in particular the final encounter between Bohannon and the Swede. In fact, the interactions between those two, and between Bohannon and Elam are the highlights of the show.

Where are the buffalo?

The series is filmed in Alberta, which has one of the largest concentrations of buffalo in North America, but buffalo have failed to appear on the show even though they are a key part of the history of the railroad. This season’s Big Bad, the Sioux, resisted the construction of the railroad because they depended on the giant herds of buffalo that roamed the plains for food and clothing, and the railroad actually divided the herds, since the buffalo would not cross the tracks. Aside from the Sioux, the thousands of men working on the railroad had to be fed, so hunters were hired to kill buffalo to put meat on the table.

The intent may by laudable, but the freedmen were not armed to protect the white workers. 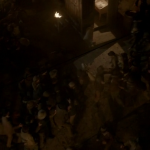 Although free, the ex-slaves working on the railroad are still not considered equal to the white workers, and are not permitted to enter the bars and whorehouses patronized by the white men. In one episode, scabs are brought in to pressure the workers to continue with their jobs despite the danger from the Sioux, and the Irish-American and the African-American contingents team up to drive off the contenders for their jobs, while Durant’s two enforcers bond in the background. It is a beautiful scene of well-directed violence lit by torchlight. Honestly, who does not love the sight of blacks and whites working together to fight a common foe, it is enough to warm white middle-class liberal hearts everywhere. However, it did not happen, and the decision to arm the ex-slaves to defend the white workers against the Sioux is simply bizarre. Unlike the fictional workers who are unwilling to face the Sioux, the majority of the real workers had served in the army during the Civil War, and were familiar with guns. In fact, Chief Engineer Dodge ran the railroad like the army, so the laborers moved with discipline when working on the tracks or defending the camp.

Aside from the other issues, the show fails to live up to its name. The floating town was called Hell on Wheels because it was inhabited by countless card sharps, prostitutes and bar owners, all drawn to the town in the hope of separating the thousands of laborers from their hard-earned money. It was a rare day when a dead body was not discovered in the street. However, the fictional town is an extremely sanitized version of the actual place. The only tavern seems to be more of a community center than a den of iniquity, and the brothel is populated by diligent, industrious prostitutes. Murders are so rare that they are noteworthy, and the only murder is not only solved but avenged. Why make a show called Hell on Wheels without showing the Hell?

When in doubt, have an Indian raid destroy everything. 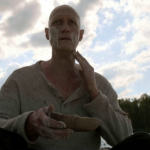 While the Swede’s machinations are a joy to watch, the idea that he attempted to destroy the railroad simply to avenge his treatment by Bohannan is a little far-fetched. Basically, the writers are saying that the Sioux would have limited themselves to small-scale raids without the interference of a bad white man, who stirs up the Indians. Admittedly, it must be a good plot device, since it was used in countless westerns in the forties, fifties and sixties, a period famous for its fair portrayal of Native Americans. At least in the first season, there was an actual Native American character played by Wes Studi, who articulated his tribe’s demands. In the second season, the Sioux are reduced to nameless savages who follow the leadership of a white man, first Reverend Cole and then the Swede.

Perhaps I have been a little harsh.

Viewers of the show will learn that right after the Civil War, former Union and Confederate soldiers worked in harsh conditions to build a railroad that crossed the United States. Except that Bohannon appears to be the only ex-Confederate on the railroad, and little of the harshness or the impressive organization that made the construction of the railroad possible is present.

Shootouts in the town, hostage taking, train robberies, a huge brawl between the workers and scabs, a Sioux raid that destroys a way station, literal butchery, and a climatic Sioux assault on the town, the show does not lack action. With not one, not two, but three love triangles, it does not lack romance. What it does lack is the railroad.

Roughly a third of the characters have either died or left, so the producers will have considerable freedom in the third season. Perhaps they might want to deal with the railroad. Unless the construction of the railroad was just the pitch to get money to make a soap opera set in the west with the theme of post-Civil War racism to give it a gritty edge.