Once the war entered a static phase, the planes’ primary role was to observe the enemy’s fortifications and rear areas to determine when a major push would occur and to serve as spotters for artillery. Bombs could be dropped from planes but the fragile aircraft could not carry the powerful bombs needed to cause serious damage. Planes on both sides had been unarmed at the start of the war, but guns were soon mounted on the planes, as each side tried to maintain control of its own airspace to deny the enemy information about its defenses and planned offensives. The faster models became pursuit (fighter) planes, which either hunted enemy observation planes or protected their own observation planes. Dutch designer Anthony Fokker had built a plane with a timing mechanism to synchronize machine gun fire with the engine, so pilots could shoot without hitting their propellers. The new planes were embraced by more aggressive German pilots, including Oswald Boelcke and Max Immelmann, in July 1915, and they soon took a toll on the slower, lightly armed British planes. Although the British pilots initially took such heavy losses that the pilots began to call themselves ‘Fokker fodder,’ both the French and British soon developed planes with a similar mechanism. As the production lines on both sides continued to produce increasingly larger numbers of planes, dogfights between opposing groups of fighters also grew in size, eventually involving hundreds of planes at a time.

Two brothers, Monte (Ben Lyon) and Roy (James Hall) are students at Oxford, when war is suddenly declared between France and Germany. Their friend Karl Armstedt (John Darrow) does not want to return home to join the German army and fears that England will become involved, which would force him to fight his friends. As expected, England joins the war, and Roy immediately enlists in the Royal Flying Corps. Monte does not share his brother’s patriotism, but is eventually shamed into enlisting, finding himself in the same squadron as his brother. Roy is in love with Helen (Jean Harlow), a wild girl, but he remains oblivious to her blatant cheating, until she drunkenly tells him that she does not love him.

After helping to defend London from a Zeppelin attack, the Rutledge brothers are transferred to France. As the fighting continues, Monte becomes increasingly desperate and does everything possible to avoid combat, earning a reputation as a coward. When two pilots are needed to fly a captured German bomber to destroy a key ammunition dump in advance of an attack, Monte volunteers, hoping to rebuild his reputation, and is joined by Roy. The mission proves to be more dangerous than expected, and each brother has to make a difficult decision.

The film has been justly praised for its attention to technical detail, but the script does not actually provide a clear explanation of the war or any dates. The script’s presentation of the war can be summarized as: Germany and France went to war, Britain was dragged in on France’s side, there was an unmoving front-line, and the pilots became wore down by the daily need to fly missions with a decreasing chance of survival. While dates would have been helpful, the movie excels in its presentation of the war’s effect on the pilots.

Several scenes show rough horse-play in the pilots’ dining hall and drunken revelry in the bars near the front-line, which reflects the need for soldiers and pilots to blow off steam. It is clear that the war has been going on for some time when the Rutledge brothers arrive in France. Life for soldiers in the trenches was extremely unpleasant even without the constant threat of sudden death from shelling. Both sides routinely bombarded each other, even if no offensive was planned in the sector, in order to test the enemy’s reaction or to mislead them into thinking an offensive would occur. The lines remained fixed until the end of the war, so bars quickly sprang up near the rear areas to service the troops in reserve units and support staff. Since any sector of the line could become a target, whenever troops were rotated out of the front lines and sent back to the rear to rest, the soldiers embraced the opportunity to seek release. 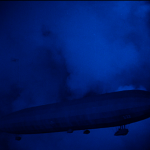 When a Zeppelin targets London, the Rutledge brothers’ squadron is sent to shoot it down. Claiming that they are defenceless unless they out-climb the fighters, the Zeppelin’s captain goes to astonishing lengths to lighten the load, eventually ordering several members of the crew to jump out of the ship. While the sight of crewmen stepping out into the air is chilling to watch, the captain’s fear is inaccurate. The scene is set early in the war, when Zeppelins bombed England with impunity, since even a direct hit caused negligible damage because the tiny bullet holes were unable to deflate the Zeppelins. The initial raids produced relatively few casualties, but the threat of death from the sky understandably spread terror among the British public. However, the situation changed in the fall of 1916 when the pilots were issued explosive ammunition. Although the Zeppelins had started raiding in groups of ten or more, not all of them would make it back to Germany. The thought of a crash understandably terrified the crews, since the entire crew of roughly sixty men would burn to death if a Zeppelin crashed. 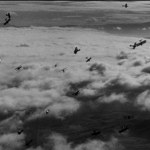 At one point, there is a massive aerial dogfight between two squadrons, which quickly becomes a bloodbath. The amazing aerial manoeuvres were performed by WWI veterans, which gives those scenes a realism that could not be matched today. If the aerial scenes appear dangerous, that is because they were. A pilot and a mechanic died during the filming of two separate scenes, and Hughes himself was injured performing a stunt that other pilots had said was too risky.

The movie had a lengthy production process. Originally intended to be a silent film, the success of The Jazz Singer (1927), the first feature-length film with sound, inspired producer Howard Hughes to make it as a talking movie, even though numerous scenes had already been filmed. The female lead had to be recast, since the original actress, Greta Nissen, had a pronounced Norwegian accent. Eighteen-year-old Jean Harlow was hired to play the aristocratic bad girl Helen, although the other lead actors were kept. Finding a director also proved problematic. Marshall Neilan and Luther Reed only lasted a few weeks each before Edmund Goulding was hired to direct the non-action scenes, while the aerial scenes would be directed by Hughes himself. When Hughes decided to make it a sound film, Goulding was replaced with James Whale, a first-time director, who had been a success on Broadway. Although Goulding was only part of the project for a relatively short period of time, he clearly absorbed something, since he directed the 1938 remake of The Dawn Patrol, one of the best WWI aviation films.

The amazing shots of the Zeppelin’s interior reflect Hughes’ background in aircraft engineering.

Supposedly all of the original scenes were reshot for sound, but some scenes, especially in the Zeppelin, seem to be moving at a faster pace, and they have the title cards common in silent films. Hughes may have felt that the scenes did not need to be reshot, since the actors were speaking in German anyway.

Early in the movie, Monte takes the first train out of Germany to avoid a duel with a baron, who had caught Monte in a compromising position with his wife. Made of sterner stuff, Roy fights the duel in his place, which establishes their personalities. Roy is dull but dependable, while Monte is all charm and no backbone. The only character with any life is Helen, played by Harlow in her first leading role, who throws herself into the portrayal of a bad girl, and she certainly is a bad girl. Aggressive and unpleasant, Helen seems to genuinely enjoy playing with men. 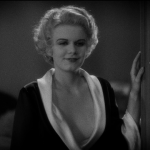 The movie is an excellent example of the difference between movies made before and after the introduction of the Production Code, which began to be enforced in 1934. When Monte takes her home one night, Helen asks “would you be shocked if I slip into something more comfortable,” and comes out in a bathrobe, where her cleavage is visible. Compared to the sterile romances that would dominate the following three decades, Jean Harlow’s performance bursts with a predatory energy, which made her a star overnight, and she would build a career as America’s sex symbol during the early 1930s.

It is a surprisingly dark story, where the love interest is a bad girl who has no interest in becoming a good girl, and the never-do-well brother can not be redeemed. The superb technical accomplishments more than compensate for the unbearable overacting, including a minute-long death scene for one of the brothers. The mix of directors and the haphazard transfer from silent to sound resulted in a strange movie, but a very good strange movie that is worth watching.