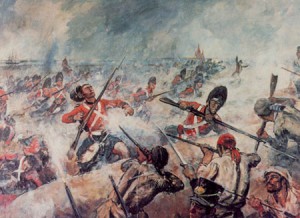 2012 is the 200th Anniversary of the War of 1812, which has been ignored by the United States and Britain, although the Canadian government has organized a series of commemorative events.

The Royal Navy had the right to impress any British citizen anywhere in the world, which was essentially legalized kidnapping. The annoying British habit of boarding American ships to look for British citizens became a major issue when Britain commenced a life-or-death struggle for global domination with Napoleon (1803-1815). At the same time, American settlers thirsty for land were pouring westwards, which led to conflict with the Indian tribes that were already living there. Convinced that the British were arming the Indians, hawkish members of the Republican party pressured President James Madison to declare war on Britain in order to eliminate the Indian threat.

President Thomas Jefferson had famously commented that an invasion of Canada would simply be a matter of marching. Despite the United States’ much larger population, the war did not go according to plan. Aside from several naval victories, the first few American armies that entered Canada were either captured or forced to retreat back across the border. Control of border forts shifted back and forth until Napoleon’s abdication on March 31, 1814 freed thousands of British troops for a seaborne invasion of the east coast, which resulted in the burning of Washington. Since recently annexed Louisiana was considered ripe for the plucking, a fleet was dispatched to capture New Orleans, and thus improve the British hand at the negotiating table. However, both sides were exhausted and the war was expensive, so a peace agreement was signed that left the British and the Americans where they had started. By the time the news reached the United States, a badly-executed campaign had enabled General Andrew Jackson to win an overwhelming victory.

Why does the war matter?

The war may seem unimportant today but it had several key results.

Improved British-American Relations The British believed that they had never suffered a decisive defeat during the American Revolution (1775-1783), even though they had been forced to surrender at Saratoga and Yorktown. The intervening years had been spent making excuses, like they were tired from fighting on several fronts and they had not used their full power, to reassure themselves that they had not actually lost. The War of 1812 proved that the United States could defend its independence, and British officials began to treat the United States better.

Canada The original thirteen states that had revolted against Britain had increased to eighteen by the start of the war, and the United States would expand across the continent during the following several decades. However, the failure of the American attempt to invade Canada meant that American Expansionism would move west, not north, enabling the eventual confederation of the British colonies that would become Canada.

Weakening of the Indian Tribes Although the war led to improved relations between Britain and the United States, the various Indian tribes came out of the war in a horrible situation. Despite the contributions of Indian allies, especially Tecumseh’s confederation, the rights of Indians were not mentioned during the peace negotiations. The tribes allied to Britain never recovered, and the tribes were left to face an expansionist United States without British support.

Canadians will discover that Laura Secord is famous not just because she is on the cover of Laura Secord Chocolate boxes, but because she walked roughly 32 kilometres in 1813 through American-controlled territory to warn a British force that it was about to be attacked by a much larger American force. Instead, the Americans were ambushed and captured at Beaver Dams.

Americans will learn the origin of the phrase: I have met the enemy and he is ours, which was said by Lieutenant Porter after he won a decisive naval victory on Lake Erie in September 1813.

More important, the American anthem originated as the poem “Defence of Fort McHenry,” written by Francis Scott Key, who had been inspired when he watched British ships bomb Fort McHenry with Congreve rockets and mortar shells, during the Royal Navy’s failed attempt to enter Baltimore Harbor.

Badly. Five movies were made on the war between 1938 and 1958, and then Hollywood forgot about the War of 1812. Fittingly, the last movie was a remake of the first. The first is probably the best, but that is not saying much, since none of them are very good.

Directed by Cecil B. DeMille, starring Frederic March and Franciska Gaal
Powerful pirate Jean Lafitte debates whether to join the greatly outnumbered American army and defend New Orleans or play it safe by working with the invading British during the War of 1812. (full review)

Directed by Richard Wallace, starring Victor Mature and Louise Platt
When the captain of an American merchant ship is killed by the British at the start of the War of 1812, his daughter transforms the ship into a privateer in order to prey on British shipping.

Directed by Edward Dmytyrk, starring Mark Stevens and Angela Lansbury
An American captain tries to smuggle gold through a British blockade during the War of 1812 while preventing his crew from mutinying and taking the gold for themselves. (full review)

Directed by Spencer Gordon Bennet, starring Jon Hall and Jay Silverheels
In Indiana Territory in the early 1800’s, Tecumseh tries to live in peace with the white settlers but his brother allies with the British, who are trying to incite conflict between the Indians and the settlers, and challenges his leadership of the tribe.

Directed by Anthony Quinn, starring Yul Brynner and Claire Bloom
Powerful pirate Jean Lafitte debates whether to join the greatly outnumbered American army and defend New Orleans or play it safe by working with the invading British during the War of 1812. (full review)

Among the five movies on the War of 1812, two deal with the Jean Lafitte and the Battle of New Orleans, which occurred at the end of the war. Actually, the peace treaty had already been signed but news traveled slowly then. One looks at Tecumseh and two are set at sea.

It seems completely unbelievable that no one in Hollywood wants to make a movie about the series of American naval victories where three American warships beat three British ships of equal power in one-on-one battles during the early months of the war. An upstart republic humiliated the proud Royal Navy, there has to be a movie in there somewhere.

Unfortunately, it seems more than likely that Hollywood will continue to ignore the War of 1812.