Since Lincoln, Steven Spielberg’s big-budget look at Abraham Lincoln, opens in theatres tomorrow, it would be a good idea to examine how the sixteenth president has been handled by Hollywood over the years. 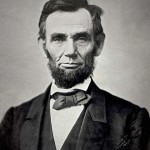 Born in a log cabin, Abraham Lincoln (February 12, 1809-April 15, 1865) taught himself enough law to become a lawyer. An ambitious man, he won several elections to the Illinois state legislature, but Lincoln’s political career seemed to have peaked after a single term in Congress. The debate over slavery tore apart the nation in the 1850s, and Lincoln’s defeat in a hard-fought campaign against Democrat candidate Stephen Douglas for a senate seat in 1858 attracted the attention of the growing abolitionist movement. Chosen as a compromise candidate during the 1860 Republican convention, Lincoln won election as president, aided by the breakup of the Democrat party over slavery. Convinced that he intended to destroy their way of life, the southern states seceded, starting a long civil war (1861-1865). When Lincoln emancipated the slaves, it seemed likely that he would lose the 1864 election, but several victories on the battlefield ensured that he won a second term. Unfortunately, Lincoln was assassinated shortly after the war ended.

Possibly the greatest American president, Abraham Lincoln has been the subject of a number of movies, but he has received little attention during the past few decades.

Abraham Lincoln (1930) Adopting an episodic approach to the life of Abraham Lincoln, the movie turns a shrewd, intelligent man into a saint-like figure, who leads the government to win a war and free the slaves, without actually showing any black people, presumably to avoid offending white audiences in the south. Made when actors and directors had not fully adjusted to the switch from silent movies to sound, the film is honestly hard to watch. Infamous for the racist Birth of a Nation (1915), where the Klu Klux Klan save the South from an alliance of blacks and northern whites, director D.W. Griffith hoped that Abraham Lincoln would salvage his reputation and his career. It did neither. (Full Review)

Director John Ford’s first collaboration with Henry Fonda, Young Mr. Lincoln (1939) presents Abraham Lincoln’s first major case as a young lawyer in Springfield, Illinois, where he defends two young strangers accused of murdering a popular deputy. A touching movie with excellent court-room scenes, Fonda’s Lincoln employs a simple manner and sharp wit to win the sympathy of the jury, and proves to be a formidable cross-examiner. Despite a slow start, Fonda captures the real Lincoln’s mix of self-depreciating humor and belief in people’s better nature. Even though it only covers the early stage of his career, it is probably the best of the films on Lincoln. It is definitely the most enjoyable. (Full Review)

Abe Lincoln in Illinois (1940) dealt mainly with his romances, and incorrectly portrayed Lincoln as resisting a political career. Unbelievably boring, the movie follows the correct sequence of events but drastically changes Abraham Lincoln’s character to fit the needs of the script, while its plodding pacing makes watching it an unpleasant experience that should never be repeated. This is a pity since Raymond Massey has an impressive resemblance to Lincoln. (Full Review)

Although Lincoln only makes a brief appearance in the film, The Tall Target (1951) is worth watching because it is excellent. Combining a great mystery with superb historical accuracy, the movie uses the Baltimore Plot, a suspected conspiracy to assassinate President-elect Abraham Lincoln during a stop in Baltimore, to illustrate the tension in the United States as the nation found itself on the verge of civil war. (Full Review)

Although there had been four films devoted to Lincoln in a twenty-year period, he basically faded from view for the next twenty years.

Once again, more than twenty years passed before there was a serious look at Abraham Lincoln. However, three movies about the sixteenth president have appeared since 2011:

The Conspirator (2011) Deals with the assassination of Abraham Lincoln and the trial of the surviving members of the conspiracy. Reviews have been very good but time constraints prevented me from reviewing the movie in time.

Abraham Lincoln: Vampire Hunter (2012) should not be dismissed because it is a movie about Abraham Lincoln fighting vampires, but because it is a bad movie about Abraham Lincoln fighting vampires. Bursting with countless elaborate and ridiculously expensive action scenes where humans routinely make death-defying acrobatics, the film numbs the mind into submission. To be honest, the number of missed opportunities is simply depressing. (Full Review)

Intended as a heavy contender for the Oscars, Steven Spielberg’s Lincoln covers the brief period when Lincoln struggled to ensure passage of the Thirteenth Amendment, which outlawed slavery, thus emancipating the slaves. Given the recent legislative deadlock in the United States, this is a timely topic. Fearing that the film would become part of the partisan fighting, Spielberg understandably decided to postpone the release until after the election. Boasting an impressive cast, advance reviews have been universally positive. Daniel Day-Lewis appears to have transformed himself into Abraham Lincoln, even adopting the real man’s high-pitched, reedy voice. Having played a quadriplegic with an indomitable spirit in My Left Foot (1989), a frontiersman raised by Native Americans in The Last of the Mohicans (1992), and a savage killer in Gangs of New York (2002), he will undoubtedly be able to portray Lincoln’s mixture of a kind heart, inability to hold a grudge and steely determination. Having spent quite a bit of time researching Abraham Lincoln over the past few months, I have come to respect him even more than before, so I hope that Lincoln lives up to expectations.