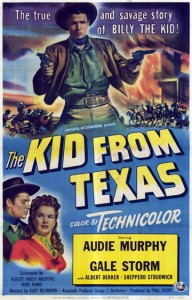 Two factions are battling for control of Lincoln County. Lawyer Alex Kane (Albert Dekker) and his partner Roger Jameson (Shepperd Strudwick), an English rancher, oppose Major Harper, who relies on gunmen to get what he wants. Although William Bonney (Audie Murphy) prevents the arrest of Kane and Jameson on trumped-up murder charges, an ungrateful Kane thinks that Jameson should not hire a gunman like Bonney for his ranch if they want Governor Lew Wallace (Robert Barrat) to take their complaints about Harper seriously. Aware that Bonney is on the run, Jameson gives him a chance, after persuading him to lock up his guns to avoid trouble. The situation becomes more complicated when Kane’s young wife Irene (Gale Storm) arrives in town, and Bonney immediately falls for her.

The situation escalates when the drunken leader of a posse of Harper’s men shoots Jameson while trying to serve a warrant. Seeing the only man who treated him with respect gunned down, Bonney swears to hunt down every man of the posse. Although initially against the formation of a posse to arrest Jameson’s killers, the ambush of several of Kane’s ranch hands by Harper’s men drives Kane to declare war.

When Governor Wallace makes Pat Garrett sheriff of Lincoln County, both Kane and Harper agree to give up their gunmen, and Kane abandons any support for Bonney, even contributing to a reward for his arrest. Hoping to end the fighting, the governor offers a blanket amnesty but Bonney refuses the governor’s urgings to accept the offer because he wants vengeance. Despite a massive manhunt, Bonney eludes capture, which attracts several followers. Even after he gains his revenge, Bonney remains in Lincoln to remain near Irene Kane, which proves to be his downfall.

“In some instances, we have changed the names and slightly altered the chronology but the facts were as you see them.” Usually when these words appear at the start of the movie, the history goes out the window, but the script is surprisingly accurate. In fact, it is a confusing mixture of fact and fiction. Bonney, Governor Wallace, Pat Garrett and several others are named after actual participants in the Lincoln County War, but Kane, Jameson and Harper are standing in for McSween, Tunstall and Dolan respectively. Bonney’s daring escape from jail, where he stole a gun from an easily distracted deputy, and then killed two men, one of them with his own shotgun, is what made him infamous across the nation.

However, the explanation of his descent into crime is overly fanciful. The screen Bonney had left home when he was twelve after killing a man who had bad-mouthed his mother. The facts are less dramatic. She died of tubercolis, he drifted into petty crime, and accidentally killed a man during a bar fight when he was seventeen.

Unlike the screen Sheriff Copeland who is too old to enforce the law, the real man simply enjoyed drinking with the Regulators and allowed Bonney to leave town because he felt that Bonney had been made a scapegoat for the range wars.

The local senoritas all have eyes for Bonney but he is the strong, silent type, who thinks only of revenge. Aside from his size, Murphy’s version bears little resemblance to the real Bonney, who loved gambling, guns, dancing and women. While Murphy does not act like Bonney, the script keeps one critical aspect of his personality. All of the local Mexicans like the screen Bonney, which is correct since the real man was treated as a member of the Hispanic community, who appreciated that he did not condescend to them and even spoke their language fluently, unlike the leading Anglos who only noticed the original Hispanic residents when driving them off their land.

There is no mention that Governor Wallace was too busy writing Ben-Hur to take an active role in bringing peace to New Mexico. Admittedly, he was appointed governor to end the fighting but he took office after both Tunstall and McSween were dead. Wallace did meet with Bonney, but Bonney came to him. In fact, Bonney eagerly wanted an amnesty, but did not receive one because he did not qualify.

What sets the movie apart from the many movies on Billy the Kid is the portrayal of the leaders on both sides as being ruthless and motivated only by their own self-interest. Kane is weak, but as much a villain as Harper, who stays out of the fighting once Wallace makes Garrett sheriff. Kane’s wife resents him sending men to risk their lives for his property, which strains their marriage to the breaking point, but he refuses to let her go home because people would think that their marriage is a failure.

One of Audie Murphy’s first starring roles, he is incredibly stiff, and only comes to life when he has a gun in his hands. In fact, all of the actors are rather lifeless. The town drunk who fears guns and hard work equally is the most interesting character in the movie.