Aptly described as the Forgotten War, the Korean War (1950-1953) has been overshadowed by the Vietnam War (1955-1975). A little more than twenty movies were made by the United States, the vast majority came out during the 1950s, and most were forgettable. However, a few were good, and South Korean filmmakers have produced several excellent films during the past decade. So, here are nine films on the Korean War worth watching. 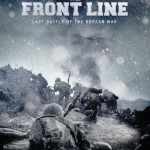 Directed by Jang Hoon, starring Shin Ha-kyun and Go Soo
In the third year of the Korean War, an ROK officer is sent to Aerok Hill, which has repeatedly changed hands, to investigate a letter written by an NKPA soldier that was mailed in the ROK, and discovers that some of the veterans, exhausted by the endless fighting, have been communicating with the NKPA through a message box buried in a bunker in the hill. Quite a few scenes are gut-wrenching, so the script balances the pain with a surprising amount of humor. The movie shows how soldiers on both sides were worn down after losing friends in the vicious struggle for hunks of rock that are bargaining chips in the peace negotiations that seem to have made no progress in two years. It is amazing for a Korean film to present both sides’ perspective, and likely caused a considerable amount of controversy. The best movie I have seen on the Korean War, and one of the best war movies I have ever seen. (full review) 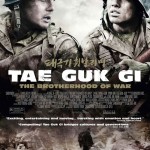 Directed by Je-kyu Kang, starring Dong-gun Jang and Won Bin
Shortly after North Korea invades, two brothers are drafted into the ROK army. Hoping to win the Medal of Honor, which will ensure that his brother is released, the eldest brother repeatedly accepts suicide missions. A harsh examination of a bloody civil war, the screen South Korean troops massacre enemy soldiers even if they surrender, while President Syngman Rhee’s death squads kill anyone suspected of Communist sympathies. Band of Brothers-level scary, the battle scenes are brutal with blood and body parts flying everywhere, so the movie is not for the weak at heart. Hollywood naturally focused on the American view of the war, and ignored the contribution made by the ROK army. Tae Guk Gi understandably intends to remedy the situation, and succeeds. The first big-budget movie to look at the Korean War from South Korea’s perspective, Tae Guk Gi is outstanding. The film’s greatest drawback is the relentless melodrama. It is no exaggeration to state that aside from the tranquil interlude at the beginning, the rest of the movie is a relentless battle, either with bullets or emotions. (full review) 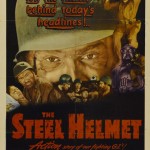 Directed by Samuel Fuller, starring Gene Evans and James Edwards
A small group of American soldiers struggles to hold an isolated temple during the early days of the Korean War. The first movie made in Hollywood on the Korean War, director Sam Fuller relied on the newspaper coverage of the war, mixed in with his own observations during WWII, to write the screenplay. Believing that audiences never actually saw the ordeal experienced by the ordinary soldiers, Fuller wanted to show the confusion and the brutality that quickly became common during war. Tired of the simple propaganda of “we are right and they are wrong” that was popular in Hollywood war films, Fuller faced head-on racism in the United States. Aside from referring to the Jim Crow laws that made blacks second-class citizens in the southern states, The Steel Helmet was the first movie to openly mention the internment of Japanese-Americans during WWII. While scenes of soldiers discussing the merits of democracy to explain why they fight are common in war films made in the 1940s and early 1950s, Fuller turned that approach upside-down by showing that soldiers were willing to fight even though their country blatantly did not live up to its ideals. It was made too early in the war to have any real historical depth, but its raw intensity makes it a must-see. (full review) 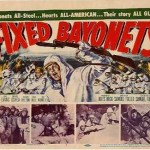 Directed by Samuel Fuller, starring Richard Basehart and Gene Evans
A platoon is left to cover the retreat of an American division following the surprise Chinese intervention. A WWII veteran, director Sam Fuller had little interest in producing a glossy patriotic film that glorified the army, preferring to present the life of an average soldier instead. Tired and cold, the soldiers grumble about the weak coffee and unappetizing rations, but remain professional, motivated by a desire to survive, not patriotism. Richard Baseheart’s Cpl. Denno is the protagonist, but Gene Evans’ Sgt. Rock is the star as a solid, gruff veteran. (full review) 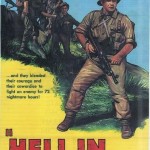 Directed by Julian Aymes, starring George Baker and Harry Andrews
A tribute to England’s National Sevicemen, A Hill in Korea is one of the more realistic movies on the Korean War, acknowledging widespread racism, the men’s belief that the war is meaningless, and the Chinese mass attacks. Openly referring to Koreans as gooks and Chinese as Chinks, the men of the patrol treat local villagers roughly. The battle scenes portray the Chinese tactic of charging in formation against machine guns, which had proven effective during the Chinese civil war and often worked in Korea. A standout scene is an insightful discussion about how the Chinese will win because there are more of them and they are uncivilized, so they have nothing else to do, while civilized white men want to watch a show on the telly and go down to the pub for a pint. Rejecting blind patriotism, the men know that it is a forgotten war, so they will not be heroes if they survive and go home, which was far too true. (full review) 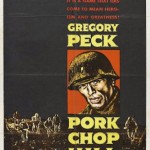 Directed by Lewis Milestone, starring Gregory Peck and Harry Guardino
In April 1953, after the negotiations have been stalled for two years, an American platoon is sent to drive off Chinese troops that have captured most of Pork Chop Hill. Despite altering the events to make a more conventional story, the script does capture the  attitude of soldiers in Korea. The men are openly scared and many have to be stopped from running back down the hill or using the excuse of helping the wounded get to safety. The war was not popular, most soldiers did not identify with the Koreans they were defending, and the troops knew that there was no possibility of total victory, just an endless stalemate. The differences between the actual battle and the script were largely due to Gregory Peck’s demand for a role that reflected his status as a star. The film is relatively accurate, but Peck was much too old to play a lieutenant, and the final scene where he gives a lengthy speech explaining why the battle was necessary for the peace negotiations is unbearable. (full review) 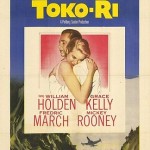 Directed by Mark Robson, starring William Holden and Grace Kelly
A naval pilot based on an aircraft carrier resents having to give up his life and law practice when he was called up, especially since he had already fought in WWII. The producers received cooperation from the Navy, including two carriers and their escort ships, and clearly made the most of it. The thirteen-minutes-long opening scene is a detailed look at the landing procedure on a carrier and the chopper pick-up of a downed pilot. The pilot’s resentment that everyone at home has forgotten about the war is an accurate portrayal of many pilots, who felt that their efforts were pointless, Syngman Rhee’s government did not deserve propping up and no one in the United States appreciated their sacrifice. Despite the script’s unblinking support of the United States’ involvement in the Korean War, it bravely acknowledges the fear faced by pilots before dangerous missions. The end is surprisingly dark, since two of the lead characters die in a muddy ditch in Korea. (full review) 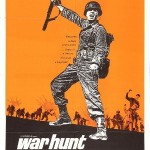 Directed by Denis Sanders, starring John Saxon and Robert Redford
Exploring similar themes, War Hunt is a precursor to Platoon. A young American infantryman is sent to the front line in Korea during the last few months of the war, and encounters a psychotic soldier who appears to be a serial killer. The two men clash over a young Korean orphan. One wants to place the boy in an orphanage and the other wants to turn him into a killer. The first hour of the movie is brilliant, but the last twenty minutes are strange. Lacking the resources for large-scale battles, the production team chose to create a snapshot of life on the front, and they succeeded. Essentially a B movie, the film was made in fifteen days on a miniscule budget, but the set design is excellent, providing an faithful copy of the real bunkers on the UN lines. No other movie comes close to capturing the futility of the Korean War once it had entered the stalemate stage. The soldiers believe that the only goal is to survive by taking as few risks as possible, which was a common attitude at that stage of the war. (full review) 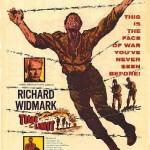 Directed by Karl Malden, starring Richard Widmark and Richard Basehart
Several months after the end of the Korean War, an American officer is being investigated for a court-martial because he had recorded propaganda messages for the North Koreans. However, the investigator in charge of the case is suspicious, and continues to ask questions until he learns that the officer is covering up for the killing of a collaborator by his fellow PoWs. Time Limit does not fit any simple characterization. A war movie that also appears to be a court-room drama, the movie ends before the court-martial has even begun, but there is the mandatory interrogation that causes a key witness to break down and tell the truth. However, it is worth watching because it was the first film to admit that American PoWs had collaborated with their Communist captors in exchange for better treatment. (full review)