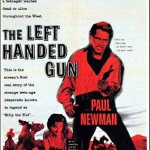 An exhausted Bonney (Paul Newman) staggers onto the ranch of John Tunstall (Colin Keith-Johnston), who hires him as a cowhand despite a reputation as a killer. Quickly forming a close bond with the older man, Bonney is shattered when Tunstall is murdered by a sheriff’s posse working for Morton, a powerful rancher, who does not welcome competition. Bonney swears to avenge Tunstall by killing Morton, Sheriff Brady and the two deputies, Moon and Hill. Fellow cowhands Tom Foliard (James Best) and Charlie Bowdre (James Congdon) are reluctant to kill for someone just because he had paid their wages, but they stand by Bonney after he shoots Morton and Brady in the street. Barely escaping a mob, Bonney’s friends take him to another town, where Pat Garrett (John Dehner) admits his own troubled past and helps hide him from the law. Newly appointed Governor Lew Wallace declares an amnesty to end the cattle war, but Bonney will not rest until the last member of the posse is lying in a hole in the ground. When Bonney breaks the amnesty, Garrett accepts the position of sheriff and hunts him down.

Aside from Bonney’s escape from the Lincoln County jail, the script is engaged in an open relationship with the facts.

Morton appears to be standing in for James Dolan, the hard-nosed businessman who had arranged Tunstall’s murder, although it is unclear why his name was changed when most of the other characters are based on real people. Instead of a greedy young man who planned to replace Dolan’s monopoly with his own and had hired gunmen to protect him against Dolan’s henchmen, Tunstall is a middle-aged, saint-like Englishman, who believes that one avoids trouble by not wearing a gun.

Although the real Bonney had received enough schooling to be able to read, the fictional version is illiterate, so there are several painful scenes where an embarrassed Bonney pretends to understand posters and newspaper articles.

While the real Bonney was popular with the ladies, possibly including the wives of his friends, the screen version has eyes only for his friend’s wife. Saval’s reaction when he learns of his wife Celsa’s (Lita Milan) affair with the young outlaw is one of the few interesting scenes in the movie.

By the end of the film, Bonney has lost everyone he had cared about, so he no longer has any reason to live. This is a touching ending but the real Bonney still had many friends, although quite a few may have been acquaintances who were too terrified to turn him into the law. While several of his friends had died during the bloody Lincoln County War, the rest had come to a violent end because they had chosen careers in the high-risk, high-return field of rustling. Bonney’s refusal to leave the outlaw life did not match the script’s portrayal of Bonney as a troubled kid who needed a father figure. Actually, several of Bonney’s comrades made a conscious decision to increase their life-expectancy by leaving New Mexico after the amnesty was declared, but Bonney chose to not go with them. The script basically says that Bonney did not understand the amnesty, and could not rest until all four of Tunstall’s murderers had been killed, but the real Bonney did realize the consequences of his actions, he had just grown up exposed to violence during his formative years, and he accepted it as part of his life. In fact, once the amnesty was declared Bonney and the surviving Regulators got drunk with their former opponents to celebrate that they would not kill each other.

The role had originally been intended for the considerably younger James Dean, who had died in a car accident two years earlier. Thirty-three year-old Paul Newman does his best to play a mixed-up kid but his age just adds to the film’s already strange atmosphere.

Filmed on a Warner Brothers backlot, first-time director Arthur Penn was given a small budget, so the production crew had to repair abandoned sets from previous films like Juarez (1939).

Acknowledging that the story is completely fanciful, Penn defended his approach by stating that contemporary news reports routinely contained more exaggeration than facts. It is true that the news reports at the time were basically made up, but Bonney’s history was known when Penn made the film, he simply chose to ignore it in favor of a story better suited for the rebellious youth at the end of the Eisenhower era. Bonney’s past and family were intentionally not fully revealed in order to keep an air of mystery. Tunstall was intended to serve as a father figure for Bonney, while Saval’s wife was an Oedipal figure. Intending to show that Bonney, Bowdre and O’Foliard were troubled adolescents, unable to control themselves, the three young men get into hijinks like a brawl with soldiers where they cover everyone with flour. However, Paul Newman’s Bonney appears to be touched in the head, bordering on mentally challenged, as if he is a child in a man’s body. Admittedly Bonney was young but the experience of living on his own since he was a teenager and taking part in numerous gun battles had undoubtedly matured him.

The character of Moultrie (Hurd Hatfield) is a very unsubtle presentation of how the media creates and then destroys celebrities. Having made Bonney into a hero, Moultrie eventually becomes disillusioned with Bonney and betrays him to Pat Garrett.

The decision to treat the historical record as a buffet was made by Penn, but the fact that the film is a mess and does not always flow smoothly is not entirely his fault. The script was based on a play by Gore Vidal, who was friends with Newman, but producer Fred Coe had hired writer Leslie Stevens to completely rewrite Vidal’s script without actually notifying Vidal. Although happy with the new script, when the shooting ended, a stunned Penn discovered that he would not be editing the film, so it is impossible to determine who was responsible for the odd film.

Boring, strange and pretentious, the story is silly, as if it was made for children.