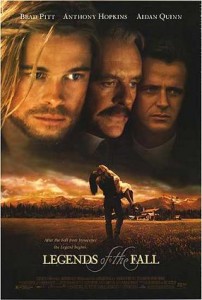 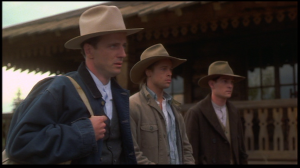 Ordered to evict an unnamed tribe from its land, Colonel Ludlow (Anthony Hopkins) resigned from the US Army and settled in Montana. One Stab (Gordon TooToosis), a member of the Cree nation, helps raise the colonel’s middle son Tristan (Brad Pitt). Shortly after Samuel (Henry Thomas), the youngest son, comes back from Harvard with his fiance Susanna (Julia Ormond), WWI breaks out. Defying their father, Samuel and Alfred (Aidan Quinn), the eldest son, enlist in the Canadian army since the United States is neutral. Tristan goes along to keep an eye on Samuel. When Samuel is killed, Tristan goes crazy and starts scalping German soldiers. Discharged from the army, Tristan returns to the ranch a few months later. When Susanna rejects him in favor of Tristan, Alfred moves to Helena, a booming city, and becomes a successful cattle broker. Suffering from what we now call PTSD, Tristan is not entirely sane. After he nearly kills Susanna, he sails across the world, searching for peace. A brief letter tells Susanna to marry someone else. Alfred prospers and local businessmen nominate him for Congress, against his father’s wishes, who loathes the government. Tristan comes back to learn that Alfred and Susanna are married. Becoming a bootlegger, Tristant marries Isabelle (Karina Lombard), the housekeeper’s daughter, in 1921. They soon have a son and then a daughter. When Tristan ignores a warning from the local Irish gangster in Helena, a confrontation has tragic consequences. 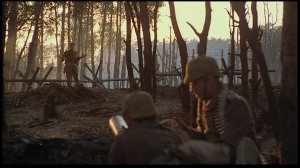 The film is primarily a romance, so the two battle scenes on the Western Front are brief.

When the sons fight their first battle in February 1915, the troops are slaughtered by machine guns and Alfred is wounded. However, the script pays little attention to the war, so none of the exhaustion and terror of trench warfare appears. Later, Samuel rashly goes on a reconnaissance without Tristan. Inhaling mustard gas, Samuel is blinded and gets stuck in barbed wire until a German machine gunner puts him out of his misery. Actually, the Germans had slowly set up a machine gun while patiently waiting for Tristan to arrive so Samuel could die in Tristan’s arms. Naturally, he kills the soldiers, cuts out his brother’s heart and then starts scalping German soldiers at night. 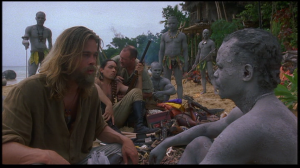 Unfortunately, more attention was paid to Tristan’s travels than the WWI scenes, which reflects the limited budget. All of the travel scenes were filmed in Jamaica, which stood in for Polynesia. It is worth mentioning that the elephant tusks and animal carcasses for the scenes where he is a hunter in Africa were props built for the set, not real elephant tusks.

Bootlegging was included in the script to show that it was not just limited to the East Coast and Chicago, but was huge in Montana since it was close to the Canadian border, which is actually interesting. Unlike most of the movie. 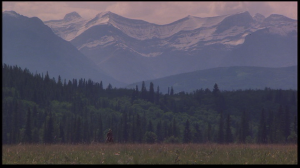 Legends of the Fall was a passion project for director Edward Zwick, who loved the book and even gave it as a gift to friends. Sadly, none of that passion made it onto the screen. Despite the gorgeous scenery, so much happens in the movie and yet it is so, so boring. Eliminate the endless dramatic pauses and I would have twenty minutes of my life back. This is possibly Brad Pitt’s worst movie, at least until the excrement of World War Z. Given the large number of burials, I have the feeling that Zwick and the writers intended to make a tragic epic, but they failed. I first saw this movie a long time ago, and it did not make much of an impression on me. When I watched it again to write the review, I hoped it would be more like Atonement (2007), where a surprisingly touching love story surrounds a visually stunning but otherwise bland portrayal of the British evacuation at Dunkirk. Instead, the love story is cliched and the battle scenes are substandard.

The colonel’s servants are an Indian woman and a white man on the run for some undisclosed crime and their daughter. One of the few good parts of the film is the fact that the Native American characters speak Cree, and everyone else has learned to understand them. 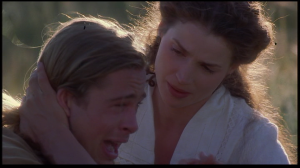 A brief scene before the sons’ departure makes it clear that there is a powerful attraction between Susanna and Tristan, which reflects their struggles with their respective demons. Despite her apparent happiness with Samuel, Susanna’s discomfort had been building since she had arrived at the ranch. Instead of leaving after Samuel’s death, she remained because she had nowhere else to go. Witnessing Tristan break down and cry at Samuel’s grave, she falls for him, since he is both sensitive and manly. Tristan’s open display of his emotions is the opposite of the tradition he was raised in where emotions are kept inside. A scene with Tristan going crazy in a psychiatrist’s office after Samuel’s death was cut, but would have explained why he left when he nearly stabbed Susanna. 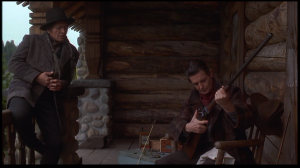 The scenes where the little clan prepares for revenge and hunts their enemies after Isabelle’s death is probably the only part of the movie I enjoyed. Oddly enough for someone who got his initial break on the television drama Thirtysomething, Zwick seems fascinated by marksmanship.

One Stab is occasionally sarcastic. More sarcasm and less sexual tension would have helped the film. Instead, it is painful and boring. Edward Zwick has made many good films, but this is not one of them.