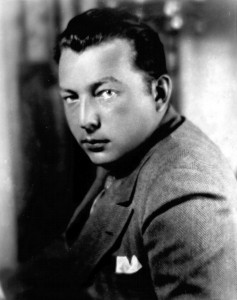 Best known for the anti-war classic All Quiet on the Western Front (1930), Lewis Milestone (September 30, 1895-September 25, 1980) directed several patriotic war movies during WWII. However, he was labeled a Communist sympathizer during the witch hunt after the war, which limited his career. Other notable films include Of Mice and Men (1940), A Walk in the Sun (1945), Ocean’s Eleven (1960) and Mutiny on the Bounty (1962).

Lewis Milestone was born on September 30, 1895 in Odessa, Russia, and his original name was Milstein. His parents were well-off Russian Jews, and they had little appreciation for his early interest in drama, so he was sent off to an engineering college in Mitweide, Germany in 1912. Bored by engineering, Milestone neglected his studies and spent most of his time at the local theater. Restless and wanting adventure, Milestone used the money sent by his father to return home during the school break to go to America. It was not as reckless as it seems, since he had an aunt living in New York City. Milestone went through a series of dead-end jobs until he began working as a photographer’s assistant in 1915 and became a successful salesman. More important, the job showed him how to deal with people and taught him the fundamentals of photography.

His introduction to film came when he joined the Army Signal Corps after America entered WWI, and he ended up editing training films and combat footage. Milestone became an American citizen after he was discharged in February 1919, and he changed his name at the same time. He had met Jesse Hampton, an independent film producer, through the Signal Corps, and he used this connection to get a job as an assistant editor at $20 a week. Unfortunately, the job was in Hollywood, on the other side of the country, but Milestone’s love of adventure and growing fascination with film meant that his tiny savings were quickly exchanged for a train ticket.

Finding that the job with Hampton had little room for advancement, he worked for several studios, including Mack Sennett and Thomas Ince, as well as directors such as Henry King, where he gained a reputation as a skilled editor and screenwriter. After years of pestering, Jack Warner finally let him direct his first feature in 1925. However, he broke his contract with Warner Brothers because the studio was paying him $400 a week but was loaning him out to other studios at $1,000 a week. When Warners sued him, he had to declare bankruptcy to avoid paying the settlement, but he soon found work at Paramount, and then at Howard Hughes’ Caddo Company. Milestone was already a moderately successful director of comedies, gangster and war movies when he did his first sound movie, All Quiet on the Western Front, in 1930, thus becoming one of the first directors to master filming with sound. In fact, he was so interested in the project that he accepted a lower salary with Universal in order to do the film. All Quiet on the Western Front was a great success, and he followed it with The Front Page (1931).

Milestone became production head for United Artists in 1932, left in 1934 for a better contract with Columbia, and then joined Paramount in 1935. His movies during this period were not his best work, but he managed to make The General Died at Dawn (1936) on a studio backlot. Milestone did not produce any movies for three years after The General Died at Dawn because the studio system prevented him from obtaining the serious projects that he wanted, but his patience paid off when he persuaded the producers of the play based on John Steinbeck’s novel Of Mice and Men to let him direct a film version. Unfortunately, it was not a box office hit, but it still won him a contract with RKO where he made two forgettable comedies in 1940 and 1941. However, his career was stagnating when America entered WWII.

As a Russian Jew, Milestone was naturally opposed to Nazi Germany, which explains why he made Edge of Darkness (1943), his first war movie since All Quiet on the Western Front. Unfortunately, it suffers from being filmed in Monterey, California instead of Norway, and having Errol Flynn as the star. He followed it with The North Star (1943), which was set in his native Russia. Milestone continued to jump from studio to studio during the war. Edge of Darkness was made for Warners, The North Star was made for Goldwyn, and the Purple Heart (1944) for 20th Century Fox. Swept away by the war effort, Milestone’s war movies are far from subtle, the Japanese interrogators in the Purple Heart are shown as evil incarnate. In fact, the movies are unofficial propaganda, intended to help the war effort, as Milestone himself has admitted. However, A Walk in the Sun (1945), Milestone’s last movie made during WWII, was clearly a personal project, since he used $30,000 of his own money to help finance the independent production. His series of war films made in WWII showed that he believed that democracy had to be defended with violence.

Despite his patriotic films, Milestone was considered to be a Red sympathizer, and he appeared in front of HUAC in November 1946 as an unfriendly witness, where he took the Fifth. He was able to keep working and avoided being blacklisted, but it seems likely that this taint limited his choice of projects and motivated him to choose non-controversial projects. It is hard to say since he never discussed the subject in public, but there is no doubt that Milestone’s immediate post-war career lacked focus. He did two film noir movies, the second of which suffered from studio interference and was a big flop, as well as a mediocre comedy. However, his career was back on track when he collaborated with John Steinbeck to film Steinbeck’s The Red Pony in 1949, and he returned to the war genre in 1951 with The Halls of Montezuma, where he managed to make a realistic war movie that reflected the lack of patriotic fervor for the Korean War, even though it was set in WWII. The soldiers are shown as men who are trying to overcome their fears in order to do their duty rather than as rah-rah John Wayne types.

From 1952 to 1962 Milestone directed eight films, but his career was in decline and they are not his best films. He appeared to simply be working for hire and he made little attempt to improve the weak scripts by putting his own personal stamp on the films. Part of the problem was that he was often working for foreign studios that seemed unable to give him decent scripts. Even his WWII film They Who Dare (1953) seemed lifeless. In fact, his career reached such a low that he did not make another film until Pork Chop Hill (1959). As a result, he was forced to direct television programs, which he disliked, viewing it as wage slavery. Therefore, he did not have a strong position during the filming of Pork Chop Hill, especially since the film’s star, Gregory Peck, was also one of the film’s producers. Peck preserved his star image by ensuring that he got much more camera time than the minor characters, and he cut all of the scenes of the truce talks. Milestone commented that all that was left of his film was “Gregory Peck and a gun”. However, the movie did well enough that he was picked to direct the Rat Pack’s heist caper, Ocean’s Eleven (1960).

Milestone’s last film was Mutiny on the Bounty (1962), where he was brought in to replace Carol Reed, and found himself directing the rest of the cast, while Brando directed himself. He continued to work for several more years, he was taken off PT-109 (1963) and he directed a few more television episodes, but health problems forced him to stop working in the mid-1960’s. Milestone died on September 25, 1980, a year after receiving a tribute from the Directors Guild.

Since most of his career took place during the studio system, Milestone never had any illusions about his work, it was a job, and he was hired to put stories on film, not to tell his own stories. However, John Ford, Frank Capra, and Howard Hawks all existed in the same system, and they still managed to imprint their own vision on their movies. In the end, Milestone allowed himself to be limited by the quality of the material he was given, and he never developed his own style.

Starring Louis Wolheim and Lew Ayres
A group of German schoolboys, inspired by their patriotic schoolteacher, enlist together during the beginning of WWI, but soon discover that there is little horror in the trenches, just death and horror.

Starring Gary Cooper and Madeleine Carroll
Set in 1920’s Kuomintang China, an American mercenary agrees to buy weapons for a provincial government to oppose a local warlord but he falls in love with the daughter of a man who serves the warlord.

Starring Errol Flynn and Ann Sheridan
After two years of German occupation in WWII, a small Norwegian village is on the verge of revolt but is waiting for a shipment of weapons until one act of cruelty too many pushes them over the edge.

Starring Anne Baxter and Dana Andrews
The residents of a small Unkranian village struggle to resist their German occupiers following the German invasion of Russia in 1941.

Starring Dana Andrews and Richard Conte
An American aircrew captured after the Doolittle Raid is given a show trial by the Japanese.

Starring Dana Andrews and Richard Conte
Following the landing at Salerno, during the 1943 Italian Campaign, a platoon is assigned to take a fortified farmhouse, but what had seemed like the latest in an apparently endless series of enemy positions to be destroyed proves to be much harder than expected. As the number of casualties grow, so does the men’s feeling of futility.

Starring Richard Widmark and Jack Palance
A Marine Lieutenant and the surviving seven men of his platoon have 24 hours to find a hidden Japanese rocket base on Okinawa that will slaughter the Marines during the next landing.

Starring Gregory Peck and Harry Gaurdino
As peace talks near the end of the Korean War hit an impasse, the Chinese capture a strategically unimportant hilltop, so an American company is sent to retake the hill, which soon becomes a key symbol during the on-going peace talks. (full review)

Starring Marlon Brando and Trevor Howard
The HMS Bounty under Captain Bligh is sent to Tahiti to obtain a cargo of breadfruit plants, where many members of the crew become involved with native women. The captain’s tyranny causes the first mate, Fletcher Christian, to lead a mutiny.

Millichap interviewed Milestone before he died and had access to his papers. The first book devoted to Milestone, the author spends most of his time discussing his films in detail, but gives little attention to Milestone himself. As is too common with the books of the Twayne series, it is still the only book that focuses on Milestone, which makes one wonder where we would be without this invaluable series.