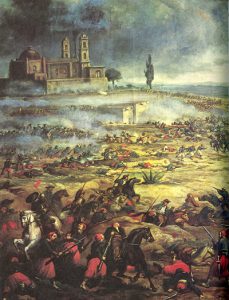 Here is an essay on The French Intervention in Mexico for those who want a more detailed explanation.  A mere 7,043 words.

Here is my article “Why is Cinco de Mayo a holiday? Or how has Hollywood treated the Franco-Mexican War?”

Here is a list of all of the movies on The French Intervention in Mexico:

Directed by Miguel Contreras Torres, starring Conrad Nagel and Medea de Novara
Made the same year as Juarez with Bette Davis and Paul Muni, this version of Archduke Maximilian’s doomed reign as a French-supported emperor of Mexico is far inferior. (full review)

Directed by Sam Peckinpah, starring Charlton Heston and Richard Harris
During the last winter of the Civil War, faced with a tribe of Apaches based in Mexico that regularly cross the border to raid American posts and settlements, the commander of a Union prison leads a force of Union soldiers, Confederate prisoners, and civilians into French-controlled Mexico to eliminate the Apaches.  (full review)

Directed by Andrew V. McLaglen, starring John Wayne and Rock Hudson
A group of southerners who lost their land to carpetbaggers are trying to start a new life serving Emperor Maximilian in Mexico run into a group of men led by a former Union colonel who are selling horses to the Mexican government, and the two groups must work together to fight the Juarista rebels. (full review)