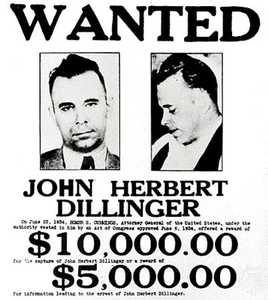 Here is an essay on the Public Enemies Era for those who want a more detailed explanation. A mere 7,592 words.

Here is my podcast on the Public Enemy Era, it is 28 minutes long.

Here is a list of all of the movies on the Public Enemies Era:

Directed by Roger Corman, starring Charles Bronson and Susan Cabot
Kelly is a tough talking bank robber who is dominated by his wife. He attracts the attention of the FBI when his gang kidnaps a little girl and her nurse. (full review)

Directed by William Whitey, starring Dorothy Provine and Jack Hogan
Ruthless outlaw Bonnie Parker leads her sidekick Guy Darrow and his brother Chuck on a rampage across the South-West, robbing banks and leaving a trail of dead bodies. (full review)

Directed by Mervyn LeRoy, starring James Stewart and Vera Miles
A veteran FBI agent relates his experience with the FBI from its humble beginnings through its battles with bank robbers, gangsters, Nazis, the Ku Klux Klan and communists.

Directed by Bill Karn, starring Lurene Tuttle and Paul Dubov
Ma Barker leads her four sons in a wave of bank robberies and kidnappings, while providing advice for other gangsters. (full review)

Directed by Herbert J. Leder, starring John Ericson and Barry Newman
Tells the story of Pretty Boy Floyd, who was involved in the Kansas City Massacre and became a successful bank robber until the FBI finally tracked him down. (full review)

Directed by Arthur Penn, starring Warren Beatty and Faye Dunaway
During the middle of the Depression, a small gang of bank robbers go on a crime spree in the mid-West but as they become more famous, the police make greater efforts to hunt them down. (full review)

Directed by Larry Cohen, starring Broderick Crawford and Michael Parks
It follows Hoover during the 48 years that he ran the FBI and examines his willingness to bend the constitution to defend the nation, as well as his refusal to retire and the fear of presidents to openly confront him.

Directed by Clint Eastwood, starring Leonardo DiCaprio and Arnie Hammer
As director of the FBI for almost fifty years, J. Edgar Hoover symbolized law enforcement to the nation. Viewed as a master of secrets, he actually struggled to keep secret his romantic relationship with Clyde Tolson, the assistant director of the Bureau. (full review)

Directed by Bruce Beresford, starring Emile Hirsch and Holiday Grainger
A young waitress falls in love with an outlaw, and they embark on a crime spree. (full review)