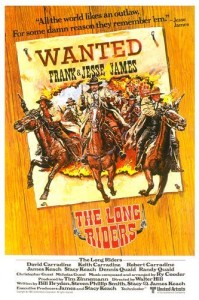 Most of the members of the James-Younger Gang had ridden with Southern guerrillas William Quantrill and Bloody Bill Anderson during the Civil War. The guerrillas’ raid on Lawrence, Kansas, which left 185 men and boys lying dead on the ground, provoked General Order No. 11, and the section of Missouri that bordered Kansas was completely depopulated to deprive the guerrillas of their support network. When the war ended, the guerrillas and their families tried to rebuild but they suffered frequent harassment and found it nearly impossible to obtain loans from Northern-controlled banks. Hardened by years of partisan warfare, a number of them began robbing banks, initially under the leadership of Archie Clements. After his death in a shootout, Frank and Jesse James, and Cole Younger became the core of the gang.

Made up of the James, Younger and Miller brothers, the gang had been robbing banks for years but when they pull a job on a train, it attracts the attention of the Pinkerton Detective Agency. The death of two Pinkerton agents during an encounter with the Youngers drives the head Pinkerton agent to order a raid on the James farm, which ends in tragedy. When the gang takes revenge, the Pinkertons launch a massive manhunt and the outlaws go their separate ways.

After a period of time, they get back together for another raid, presumably because they had ran out of money. Jesse decides to hit Northfield, Minnesota, even though it is far out of their usual range, and he forces the rest of the gang to accept Bill Chadwell and Charlie Pitts. Unfortunately, the town had been warned by the Pinkertons and the gang is shot to pieces.

Although Bob and Charley Ford had been dismissed as wannabees, Jesse needs a new gang, so he asks them to join him. However, they had sold him out to the Pinkertons, and Jesse’s career comes to a sudden end.

Little background is provided other than that the film is set in Missouri after the Civil War. None of the problems with bank loans and restarting after their homes were destroyed during Order No. 11 are mentioned, but the movie shows that the outlaws’ large support network was due to resentment against Yankees and the clannish nature of their relatives and friends. Potential informers are dissuaded by fear of retribution from the gang members’ kin. In fact, Allan Pinkerton actually gave up the hunt for the gang after the bombing, realizing that his agents would never be able to penetrate the network of supporters given their deep-rooted suspicion of strangers. The movie’s version of the Pinkerton’s raid on the James’ farmhouse mirrors the actual events very closely.

The wives and girlfriends of gang members are handled nicely, the women know and accept the dangers that come with their lifestyles. Belle Starr did have a relationship with Cole Younger, but she married Sam Starr after Cole was in prison. The confrontation with her husband did not happen, although the knife fight is one of the highlights of the film. Furthermore, the real outlaws did not introduce themselves during robberies, since their status as former rebels automatically made them suspects. Admitting their criminal activities would have guaranteed lengthy prison terms if a lynch mob did not find them first.

Much of the film is surprisingly faithful to the real events, including the lengthy courtship between Jesse and Zee, and the fact that they are all unrepentant rebels. The genuine Pinkertons were brought in before the gang robbed its first train but that is a minor matter. In reality, Northfield had been taken by surprise and two locals did most of the damage to the gang but Hollywood is unable to accept that the James-Younger gang could be wiped out by a handful of ordinary townspeople. However, the order in which they were shot and the wounds that they received are all spot on, although it was a different member of the gang who was dragged by his stirrup along the ground.

The greatest error is that Jesse is presented as the undisputed leader, instead of Frank and Cole, and the story ignores the fact that Jim and Cole Younger had only agreed to take part in the raid on Northfield to keep an eye on their younger brother Bob. Christopher and Nicholas Guest radiate sleaze, which is unfair to the real Ford brothers, who betrayed Jesse because Robert Ford and Dick Liddil, the new boyfriend of their sister, had killed Wood Hite, Jesse’s cousin, and feared his vengeance. Despite changing the Fords’ motivation, Jesse’s end is portrayed in an extremely accurate scene.

The film has good action scenes and a great cast, who are not Hollywood beautiful, which gives it a more gritty look. The impressive period detail, including the music, clothes, and hairstyles, shows how much research was done. Moreover, the Pinkertons are treated fairer than in any of the other movies on Jesse James. The leader of the Pinkertons is quite polite when dealing with the James boys’ mother, and the agents keep repeating that they are chasing the gang because they steal and break the law.

Although the idea of having real-life brothers play brothers in the movie works well, the actual gang’s membership was much more fluid, which is why even today no one is sure who robbed which banks.