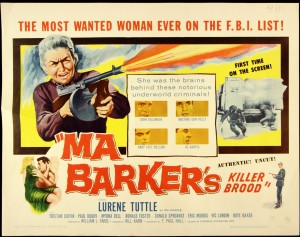 During the early 1930s, outlaws rampaged across much of the United States, robbing banks and kidnapping at will. The more famous Public Enemies included John Dillinger, Baby Face Nelson, Pretty Boy Floyd, Bonnie and Clyde, and Alvin Karpis and the Barkers. Several law enforcement officers had already been put into graves by Karpis and Fred Barker but they decided to switch to the less-hazardous career of kidnapping after a member of their gang died during a hold-up of a bank. Their first kidnapping went smoothly, but the second attracted national attention because their victim was Edward Bremer, the son of Adolph Bremer, owner of the Schmidt Brewery in St. Paul and a big financial backer of President Roosevelt. The gang eluded the Bureau until Fred’s brother Dock was arrested by FBI agents on January 8, 1935 after his new wife boasted that her husband was a bank robber, and agents found evidence in his belongings that led them to Fred and Ma Barker at a lake house in central Florida. Both Barkers were killed in a shootout, and Hoover labeled Ma the brains of the gang to avoid accusations of murdering a grandmother with no criminal record. The fact that there was no evidence that Ma was involved in the crimes did not deter Hoover. When Karpis was finally tracked down and arrested on May 1, 1936, he was the last of the major Public Enemies to be captured, signalling the end of the Public Enemies Era.

Tired of being poor, Ma Barker (Lurene Tuttle) teaches her kids to steal from the collection plate in church, and she kicks out her kind-hearted husband (Nelson Leigh) because he quotes the Bible instead of bringing home money. Driven out of town by a suspicious sheriff in 1927, the family has graduated to robbing armored cars by 1933. The money from one robbery is used to arrange the release of her son Fred (Eric Morris) from prison. Alvin Karpis (Paul Dubov), Fred’s cellmate, is smart and nasty, so he is invited to join the gang when he gets out of jail. Aside from planning her family’s jobs, Ma branches out to consult for the other outlaws, including Baby Face Nelson, Homer Van Meter and Machine Gun Kelly (Victor Lundin), who state that she is the best in the business. Playing the role of a grieving widow to case banks, Ma arranges the kidnapping of a bank president in St. Paul for $200,000. The FBI takes the lead in the hunt for the kidnappers, eventually capturing Dock Barker (Ron Foster), and finding a letter from Fred describing the lake in Florida where he is vacationing with Ma. When the agents surround them, Fred wants to surrender, but Ma remains defiant to the end.

“This story is true; documented from police records, newspaper files and eye witness reports. It is the sadistic career of Katherine Clark Barker, master of crime, who taught her sons that the only crime was to get caught.” Although the script claims that she was so cunning that she was never arrested in two decades of crime, the real J. Edgar Hoover, director of the FBI, had labeled Ma the brains of the gang in order to avoid the blame for killing an unarmed grandmother. There is no evidence that Ma Barker was ever involved in any of the gang’s activities. In fact, none of the gang’s members or accomplices ever claimed that she had taken part in any crimes. However, Hoover decided to take the offensive and state that Ma Barker had actually been the brains of the Barker gang, repeatedly using her as an example of what was wrong with modern society.

While the script transforms Ma Barker into a criminal mastermind who makes Walter White look like an indecisive bumbler, the overall story is relatively accurate. Emphasis on relatively.

Aside from her role as the driving force of the Barker-Karpis Gang, the entire world of the Public Enemies revolves around Ma. Every major bank robber, including Baby Face Nelson, Kelly, Homer Van Meter and John Dillinger, comes to Ma for plans because they are incapable of orchestrating a robbery on their own. At one point, Kelly and his girlfriend Lu (Myrna Dell) show up with a couple of men to take over a kidnapping, thinking that Ma is alone, but find themselves surrounded by Fred, Karpis, Nelson and Dillinger. It is true that most of the main bank robbers knew each other. Dillinger and Van Meter had become friends in prison, and they fled to Fred Barker after the FBI’s botched raid on the Little Bohemia Lodge. However, the idea that Nelson and Dillinger just sat around waiting for instructions from Ma Barker is hilarious, even though I suspect that it was not intended to be funny.

As the narrator points out at the beginning of the movie, Ma Barker taught her children that the only crime was to be caught. Herman (Don Spruance), the eldest son, kills himself when a job goes wrong and he is about to be caught because Ma had repeatedly told them to never be caught, slapping him silly to emphasize the lesson. The real Herman did kill himself when he was surrounded by police, but it took place in 1927. The rest of the children seem to have preferred prison to death. Lloyd, the second eldest, had already received a twenty-five-year sentence for robbing a mail truck in 1921 and a year later Arthur (nicknamed Dock) was given a life sentence after a night watchman was killed during a robbery. After becoming friends in prison, Fred Barker and Alvin Karpis began robbing banks in 1932 under the guidance of veteran bank robber Harvey Bailey, and they spent that summer robbing banks to obtain the bribe money needed to arrange for Dock and his friend Volney Davis to be released from prison.

In the movie, the FBI agents are sharp investigators who can examine a few pieces of evidence and instantly conclude that the Barker Gang is responsible. To be fair, Ma does seem to have been involved in every robbery and kidnapping performed by the Public Enemies, so it is a reasonable presumption. In reality, the bureau’s agents had been unable to dig up any concrete information on the gang since they mainly kept to themselves. Instead, the FBI benefited from a few lucky breaks and stupidity on the part of several members of the gang.

The film seems to have been intended for drive-in movie theaters, so the script leans towards the sensational. When Ma’s second husband Art drunkenly tells a speakeasy owner that the boys had robbed his place, she makes him play Russian Roulette while the boys bet which round will kill him. After the FBI find gas cans with their fingerprints, Fred and Alvin pay an underground doctor to remove their fingerprints and change their faces. The alcoholic doctor did not change their faces, so he is burned alive, and the FBI agents immediately figure that it is the work of the Barker Gang. The surgeon is based on Doctor Moran, who successfully cut off Fred and Karpis’ fingerprints, but bragged too much about the operation, and was killed by Fred and Dock, since they wanted to avoid attention.

Actually, the biggest threat to the gang was overly talkative hanger-ons, not super sleuths in the FBI. Dock Barker’s new wife could not resist telling one of her friends how exciting it was to be hanging out with criminals and she then told a friend, who told her dentist, who told his brother, who was an FBI agent. When Dock Barker and gang member Byron Bolton were captured, Dock refused to say anything but Bolton sang like a canary, including Fred Barker’s lake house in central Florida.

Even the climatic shootout is structured to make the agents seem the underdog. Fred is debating retiring until FBI agents show up, but Ma is fierce until the end. There are only two FBI agents, a sheriff and his deputy, but Ma and Fred quickly kill the sheriff and the deputy, making it a fair fight, which bears little resemblance to the actual shootout. Determined to avoid the humiliation of the failure to capture Dillinger and Baby Face Nelson at the Little Bohemia Lodge the previous year, the FBI agents had planned the raid carefully, and fifteen agents surrounded the house at dawn. When Fred refused to surrender, the agents sprayed the house with bullets, killing both him and Ma.

In a way, it is actually a feminist movie since Ma and Kelly’s girlfriend Lu are the strongest characters. The feud between the two women is is one of the most entertaining parts of the film. At one point, Ma shoots Lu’s mink stole, just to be mean.

However, it is Lurene Tuttle’s movie, especially a riveting scene where Ma talks about her childhood in poverty. She grew up wearing hand-me downs from seven sisters and underwear made from food sacks, eating watery gravy. When her husband tries to soothe her by quoting the Bible, Ma retorts that she was a scrawny child because she had too much Bible and not enough beef.

Despite the complete disconnect from historical reality, it is a fun movie.