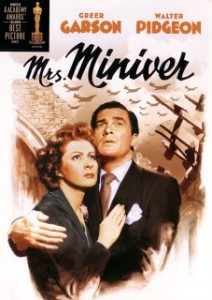 Czechoslovakia, Poland, Denmark, Norway, Holland, Belgium and France had all fallen to Nazi Germany. England was alone, supported only by the Dominions that made up the British Empire. Hitler hoped that the British government simply needed time to accept German domination of Europe. A month later, he lost patience and ordered preparations for Sea Lion, a plan to invade England. Outmatched by the powerful Royal Navy, the German Navy refused to launch the invasion until Germany controlled the skies and the British warships could be bombed at leisure. Hermann Goring, head of the Luftwaffe (German air force), was confident that the Royal Air Force (RAF) would be destroyed in a matter of weeks. Since the RAF was heavily outnumbered, it seemed that his confidence was justified and that the RAF would lose the Battle of Britain.

The Minivers, an upper-class couple with three children, lead happy lives in a village not far from London. Although the people in their little village sometimes talk about the growing chance of conflict in Europe, the main topic of discussion is whether the humble stationmaster has the right to break with tradition and enter a rose in the annual flower show against Lady Beldon, who hosts the competition on her estate and has won unchallenged for decades. Rejecting the time-honored custom of naming roses after members of the nobility, the stationmaster named his rose after Mrs. Miniver (Greer Garson) because she symbolizes the breeding and cultivation needed to grow an outstanding rose. To everyone’s surprise, Carol (Teresa Wright), Lady Beldon’s grand-daughter, and Vin (Richard Ney), the Miniver’s eldest son, start a romance.

News that England has declared war on Germany affects the entire community. The boyfriend of the Minivers’ maid is called up by his regiment and Vin announces that he will join the RAF. The maid later leaves the family to join the Women’s Auxiliary Air Force (WAAF), and finally the cook departs to work at a Tank Corps barracks. The blackouts and air drills are a minor annoyance at first. Eight months later, France is on the verge of defeat and the war is going very badly. A number of villagers who own motor launches, including Mr. Miniver (Walter Pidgeon), are summoned to the Admiralty, where they find that they are part of a huge fleet of boats that will sail to Dunkirk to rescue the British troops trapped on the beaches.

Located near an airfield, the village takes a horrible battering during the Battle of Britain, but the flower show is still held on schedule because it is too important to be affected by war.

Unlike the movie’s version of events, the evacuation of Dunkirk was not a last-minute effort, and destroyers, not a huge fleet of Little Ships, carried out most of the evacuation, which lasted for more than a week. This discrepancy between reality and fiction was not due to ignorance on the part of the scriptwriters. The British government had deliberately created the myth of the Little Ships to boost morale after the disaster in France.

It may seem strange that the Germans bombed away from London at night but they were probably aiming for the nearby airfield. The areas near airfields close to the coast were hammered during the Battle of Britain. The bomb shelters built behind most people’s houses could not stop a direct hit, and a scene in a home-made bomb shelter shows the terror of experiencing a bombing in an inadequate shelter. The aerial battles were often fought away from London in the countryside, since the idea was to stop the bombers before they hit London, but the battles took place during the daytime because the planes were not yet able to navigate at night.

The Battle of Britain was a life-or-death struggle for Britain, so the training course for pilots was repeatedly shortened as the constant fighting took a deadly toll on the squadrons. The inexperienced pilots produced by the shortened course had a comparatively reduced life expectancy.

Although the movie is blatant propaganda, there is little melodrama. However, the script does not sugar coat the dangers of war. The look on the Minivers’ faces as they quietly resign themselves to the fact that their son Vin has enlisted in the RAF is hard to watch.

The movie is based on Jan Struther’s book of the same name, which had ended with the Blitz, so the four screenwriters put together a script in three weeks.

As a Jew from Europe, director William Wyler had agreed immediately to make a propaganda film to encourage America to enter the war. Believing strongly that totalitarian Germany should be opposed, Wyler rewrote the scene with the downed German pilot, portraying him as a fanatical Nazi who wants to conquer the world and claims that no one who opposes Germany is innocent. Although happy to show the ordeals experienced by the British, Louis B. Mayer, head of MGM, was initially reluctant to permit the film to be anti-German, saying that the United States was neutral. His main worry was not international markets, but opposition from the powerful Isolationist lobby, which had already forced Warner Brothers to pull Sergeant York from the theatres. After the Japanese bombed Pearl Harbor, Mayer’s reluctance disappeared.

The Dunkirk scene with the gathering of the Little Ships was shot on a tank that would later be used for Esther Williams’ swimming movies.

The vicar’s final sermon, which states that this is not a war between soldiers, but a people’s war, was written by Wyler and Henry Wilcoxon, who played the vicar, the night before the scene was filmed because they felt that the version in the script was not strong enough. President Franklin Delano Roosevelt had the sermon translated into many languages, and leaflets with the speech were dropped over occupied Europe.

At first glance, the idea that a competition about roses receives as much attention as the war is more than a little odd. However, the competition represents both the replacement of the old order of nobility by the growing middle-class of architects and doctors, and the basic decency of the British. While the story is undeniably a very idealized view of England, it is also very effective propaganda.

Mrs. Miniver was a box office smash in America and all over the world. As the director, Wyler was naturally praised for the movie, as well as for the impressive accomplishment of producing a war movie without a single battle scene. Most important, it helped rally American support for the British when public opinion was still debating isolation or entry into WWII.