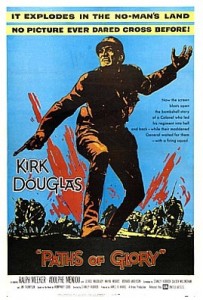 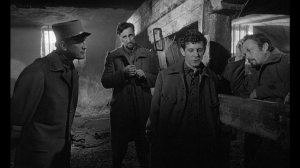 Set in France in 1916, when advances are measured in hundreds of yards. Brigadier General Paul Mireau (George Macready) initially refuses to attack the Ant Hill, a key fortification in the German lines, because his division is too exhausted. However, he changes his mind when he is offered a promotion if he can prove that he is a fighting general. Colonel Dax (Kirk Douglas), the commander of the regiment that will make the attack, is informed that his regiment is expected to take 60% casualties. When the attack fails, a furious Mireau responds by ordering a court-martial, demanding that ten men from each company are executed. Major General Georges Broulard (Adolphe Menjou) convinces him to settle for only three men, and Dax is permitted to defend the men. Private Maurice Ferol (Timothy Carey) was picked because he is a social undesirable, Private Pierre Arnaud (Joe Turkel) was selected by lot and Corporal Philippe Paris (Ralph Meeker) was chosen by Lieutenant Roget (Wayne Morris) because he knows that Roget accidentally killed another soldier during a night patrol. The finest criminal lawyer before the war, Dax makes an impressive defence, but the court-martial is treated as a formality, and the men are executed the next day.

The focus is on France, rather than England or the United States, which is a nice change, and fair since France did the bulk of the fighting on the Western Front at the beginning of the war. 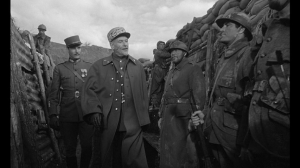 Director Stanley Kubrick was a photographer, so he carefully researched photos from WWI to ensure that the battlefield and trenches looked realistic. In fact, many scenes look like an old photo coming to life. The battlefield set was several acres of pasture that had been transformed over a month of hard labor into a battlefield by sixty men and eight cranes. The sole change from the genuine battlefield conditions of WWI was intentional. The trenches were widened from the actual four feet to six feet to permit two long tracking shots, first of Mireau and his aide leisurely inspecting the men on a calm day, and then Dax making his way to his position moments before the attack. The general’s inspection reveals to everyone aside from Mireau and his flunky that the regiment is completely unprepared to launch a major attack. The men in the trenches are burned out, and wounded men are everywhere. The weather during the filming was horrible, and everyone was sick, which added to the atmosphere. Aside from the actors, the extras were six hundred German policemen, who had received military training. 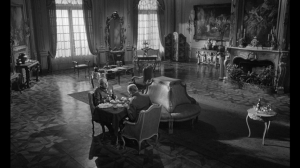 The sets capture the luxurious lifestyle of the generals living in chateaux far from the front. In particular, Mireau’s spacious office, the ballroom where the court-martial is held and the library where Dax attempts to blackmail Broulard highlight the drastic difference in living conditions between the soldiers and the general staff.

Although the film is famous for the court trial, the chilling attack on the Ant Hill is one of the best I have seen in a WWI film. The men can barely walk on the rough ground, and spend most of their time clambering up and down giant holes. 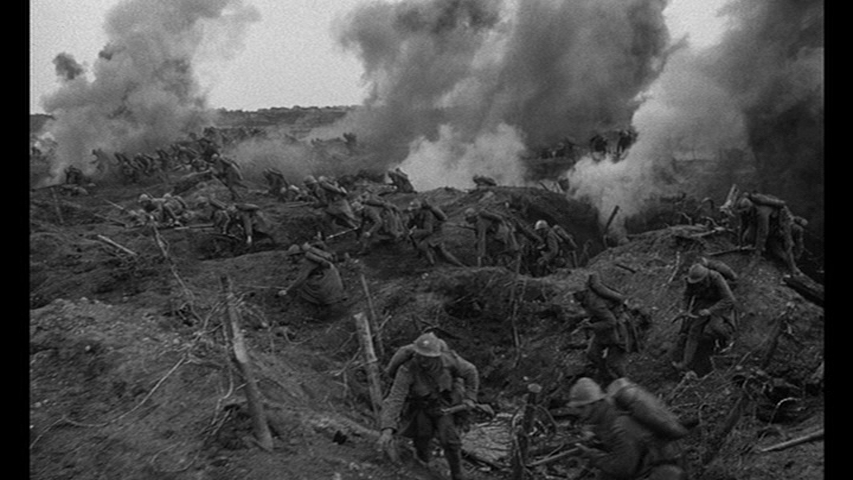 Clearly, Mireau is not devoted to his men, since he complains that the entire regiment is filled with tail-wagging curs after the attack fails. His immediate reaction is to convene a court martial, swearing that if the men will not face German bullets, they will face French ones.

The execution is based on an actual event, the Souain Corporals Affair, where four French corporals were executed on March 17, 1915. During an assault to retake territory recently captured by the Germans, French artillery mistakenly dropped shells near the French trenches rather than the German trenches, so the soldiers of one company remained in the trenches rather than face undamaged German machine guns. Informed that the troops refused to leave their trenches, Major General Geraud Reveilhac, commander of the division, ordered his battery commander to shell the trenches but the commander refused without a written order. Following the failed assault, Reveilhac demanded that twenty-four men from the company be court-martialed to provide an example for the rest of the division. Although all twenty-four men were sentenced for execution, twenty men received a stay of execution, so only four corporals were executed. The wife and the sister of two of the corporals launched a campaign to have the convictions annulled, and they finally succeeded in 1934, nineteen years later. After reading about the posthumous pardon, Humphrey Cobb wrote the novel Paths of Glory in 1935. 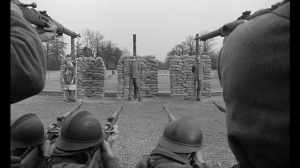 After Dax fails to convince the members of the court martial to find the three soldiers innocent, the men spend the night before the execution trying to deal with their fates, consoled by a priest and a feast. Neither religious solace nor wine proves effective. When Arnaud freaks out and threatens the priest, Paris knocks him out. Hurt too badly to stand, Arnaud will be tied to a stretcher and propped up for the execution. However, he will not be permitted to remain unconscious during the execution. Instead, General Mireau ordered Staff Sergeant Boulanger (Bert Freed), who is in charge of the guard detail, to pinch his cheeks to make sure he is conscious. Boulanger is brutally honest with the prisoners, commenting that many more will join them before the war is over. Recognizing the importance of the scene, Kubrick does not rush the execution. Later, Mireau actually compliments Dax, saying “your men died well.” 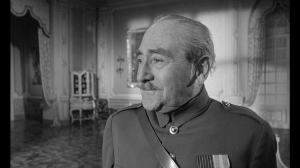 At one point, it appears that there will be a proper Hollywood ending and the men will be saved. The night before the execution, the battery commander tells Dax that he had refused Mireau’s order to shell the French trenches when the troops retreated, so Dax presents signed statements from everyone involved to Broulard, who ignores the evidence. Instead, he explains that everyone on the general staff thinks that they are doing a good job but are under a great deal of pressure from newspapers and politicians, so they do not feel that they should have to bear all of the pressure. Besides, shooting a few men is always good for morale.

Following the execution, Broulard informs Mireau that he will face an inquiry over the order to the battery commander, and then offers command of the division to Dax, having concluded that the colonel’s efforts to save the men was simply scheming to replace Mireau. Driven over the edge, Dax launches a screaming rant about humanity but Broulard is unfazed. Actually, his smug complacency is rather terrifying, and captures the attitude of the senior generals, who were unwilling to accept that their campaigns had failed because their strategy was flawed. Kubrick deliberately set Broulard to appear to be a nice guy until he reveals his true nature. 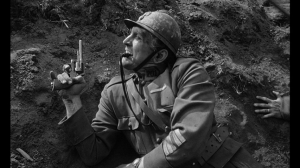 The Dax character is a composite character who was created to introduce a social conscience to the film. Since the novel ended with the execution, all of the scenes after the execution were added to introduce a sense of justice, even though the scales are far from balanced. Despite the satisfaction in seeing the butcher Mireau learn that his career is over, Broulard and his fellow generals in HQ remain in command, more concerned with their reputations than the lives of the men.

Dax first appears shirtless, which was required for a Kirk Douglas film. This is not a joke, his contract specified one bare-chested scene. In accordance with Douglas’ status as an action star, Dax leads from the front, but there are no heroics, and he spends most of the battle blowing his whistle.

After Kubrick and his production partner James Harris bought the rights to the novel, Kubrick asked crime writer Jim Thompson, who had worked with him on The Killing (1956), to adapt the novel into a script. However, no studio expressed any interest until Kirk Douglas met with Kubrick to talk about potential future projects, and fell in love with the script. Douglas’ participation encouraged United Artists to finance the film, especially after Douglas threatened to take Vikings, his next film, away from UA. 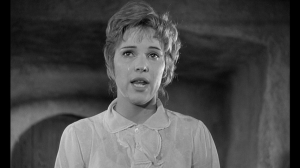 However, when Douglas arrived in Germany to make the film, he found that the script had been rewritten by novelist Calder Willingham, who had script doctored Bridge on the River Kwai (1957), because United Artists had pressed for a rewrite. Incensed that the script now had a happy ending where Dax’s blackmail saves the men, Douglas refused to star in the movie unless the original script returned. United Artists wanted the happy ending, but no one else did, and Kubrick solved the problem by adding a scene at the end of the movie where a girl sings in the tavern and reduces the men to tears. The girl was Kubrick’s girlfriend Christiane Harlan and they married the following year.

While Douglas’ involvement ensured that the film was made and that artistic vision triumphed over commercial pressures, he did not permit artistic sentiment to interfere with financial compensation. Since Douglas’ salary was a third of the budget, Kubrick and Harris would make little money unless the film made a profit. Unfortunately, the film did not make a profit. Still, Kubrick was hired by Douglas to make Spartacus (1960), which proved to be a box office smash. 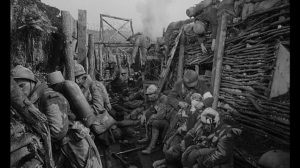 All of the characters are given enough screen time to ensure that the viewers feel that they know them. In particular, the three condemned soldiers have scenes before the battle so they appear as individuals with their own personalities rather than faceless victims during the court martial, thus ensuring that their deaths will have an impact on the viewers.

The French government did not approve of the film, and it was banned in France until the seventies.

A harsh portrayal of the cost of scheming among the high command on ordinary soldiers, Paths of Glory is one of the best movies on WWI.