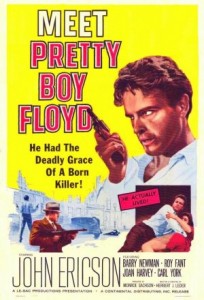 Charley “Pretty Boy” Floyd (February 3, 1904-October 22, 1934) was a bank robber during the Public Enemies Era (1933-1935). Tiring of the harsh existence and drudgery of farming, he left his wife and newborn son at home in Oklahoma and looked for better employment opportunities outside the state. Robbing a bank, he was arrested after flashing around money, and spent three and a half years in prison, where he learned the science of robbing banks. After his release, he partnered with George Birdwell to rob numerous banks in Oklahoma until Birdwell died during a shootout in November 1932. Floyd had become notorious in Oklahoma, but was still able to make frequent visits to his family. However, he attracted national attention when it was learned that he had arrived in Kansas City the evening before the Kansas City Massacre, a failed attempt to rescue bank robber Frank Nash, which left four lawmen and Nash dead, on June 17, 1933. Hoping to wait out the attention, Floyd hid for a year in Buffalo, New York. When the FBI announced on October 11, 1934 that he was considered a major suspect, Floyd tried to reach the safety of his family in Oklahoma, but was fatally wounded trying to escape a group of FBI agents and local police officers in East Liverpool, Ohio on October 22, 1934.

Pretty Boy Floyd (John Ericson) works in an oil-field, and boxes part-time. Unfortunately, the fight promoter discovers Floyd’s affair with his wife, and accuses him of stealing money, so Floyd loses his job when the oil company learns that he is an ex-con. Returning home, Floyd avenges his father’s murder, and decides to pursue a career as a bank-robber. Floyd stays at a boarding house in Kansas City run by Ma Parks (Effie Afton), who shelters criminals, including the Courtney brothers. Attracted to Floyd, Lil Courtney (Joan Harvey) warns Floyd when her husband and his brother plan to turn him in for the reward. The brothers disappear, and Lil becomes Floyd’s girlfriend. When Floyd and his dim-witted friend Curly Winwell (Carl York) start a major bank robbing spree, an investigator appointed by the governor sets a trap where Floyd is wounded and Sheriff Blackie Faulkner (Jason Evers) is killed. After driving Floyd to the boarding house, Curly is killed while robbing a bank on his own. Needing a new partner, Floyd hooks up with his boxing buddy, Al Riccardo (Barry Newman), and the two men are hired by Machine Gun Manny (Al Lewis) to rescue Jumpy Lasker, but Jumpy and four policemen are killed, which leads to a massive manhunt.

“The happenings depicted are founded in fact,” which is a new way of saying that the script-writer made up stuff to make the story more interesting. Actually, the movie is relatively accurate but the events have been altered to fit a stern law and order message. Strangely, there is no mention of the FBI or the War on Crime. Instead, the symbol of law and order is a state investigator, who plans a strategy to gradually turn people against Floyd, rather than actually hunt him down.

The script follows the basic chronology of Floyd’s life but tosses in generous helpings of fiction.

The screen Floyd had spent four years in prison for a robbery in St. Louis, but his wife, Sheriff Faulkner’s sister, divorced him while he was in prison. The real Floyd did go to prison for robbing a bank in St. Louis, but he held up the bank to get money for flashy clothes and an expensive car, not to put food on the table for his family. As part of the crime does not pay message, Floyd’s wife and son never appear in the movie, since no respectable woman would be married to a criminal. Actually, crime did pay very well for Floyd and his family. Ruby, Floyd’s ex-wife, was not related to the sheriff, and her family stayed on good terms with Floyd, even letting him stay with them when he was on the run. Most important, she reunited with him when he re-appeared even though she had remarried.

As part of the law and order message, the screen Floyd avenges his father’s death, and finds that he enjoys killing. While the real Floyd’s father was killed after a heated argument, Floyd did not seek revenge and the man did not disappear. Moreover, he was not bloodthirsty and only killed in self-defence, preferring to take hostages.

Floyd did work in an oil field and was fired when the company learned that he was an ex-con, but he did not box for money. He was called Pretty Boy because he liked to dress up and he was handsome.

Curly Winwell is based on George Birdwell, who robbed thirteen banks with Floyd in a little less than two years. While the fictional Floyd robbed banks in several states, the real Floyd and Birdwell stayed in Oklahoma. They would just drive up to a bank, do the hold up, take a few employees as hostages, and go back to the car where the driver, usually someone brought in for that specific job, was waiting. At one point, the screen Floyd boasts that he will beat the Daltons, who robbed banks and trains in Oklahoma in the early 1890s, and hit two banks in one day. The real Floyd was accused of robbing two banks in the same day in 1932, but he claimed that he only robbed one, the other was just a coincidence, which is not impossible. Fifty-one banks had been robbed in Oklahoma the previous year.

Although John Dillinger and Baby Face Nelson are mentioned, all of the people that Floyd works with are based on real people but their names have been changed. Ma Parks, the owner of the boarding house that becomes Floyd’s home-away-from-home, is based on Mother Ash, and it is unlikely that she would have been so welcoming to Floyd, since the two brothers he killed were her sons. Al Riccardo is based on Adam Richetti, Floyd’s last partner. Riccardo has an obsession with sleeping with Floyd’s girlfriends, but the real man dated Belulah’s sister, and the two men remained partners until Floyd died. Jumpy Lasker is obviously modelled on Frank “Jelly” Nash, and Machine Gun Manny seems to be based on Machine Gun Kelly, even though Kelly was not involved in the Kansas City Massacre.

During a visit to New York, Big Dutch Schultz, ganglord of New York, tells Floyd to leave because he attracts too much attention. A caricature of a gangster, Big Dutch looks like one of the villains from the Dick Tracy comic strip.

The film’s explanation of the Kansas City Massacre is the weirdest that I have ever heard. After Lasker is killed, not rescued, they are brought to meet the overlords of the mid-west gangs. (The narrator says those exact words, apparently with a straight face.) Manny tries to pretend it was a mistake but finally admits that he hated Lasker and deliberately killed him.

Floyd goes home but people blame him for sheriff and Curly’s deaths, so his old friends refuse to help, which had been the state investigator’s plan from the beginning. Despite the script’s strong law and order message, Floyd’s relatives and friends never abandoned him.

Al Lewis, who played Machine Gun Manny, would go on to fame and fortune as Grandpa on The Munsters, and probably earned his role thanks to his performance in this movie.

The scene where the three overlords kiss the pistol to signify the verdict of death is ludicrous. A bit more over the top and it would have been camp, but it is too serious to be fun.

The soundtrack is great, the acting is not. Relatively accurate but boring.