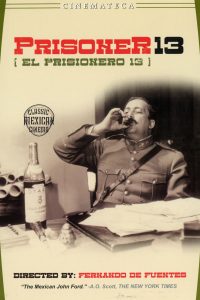 Colonel Julian Carrasco (Alfred del Diestro) drinks too much because he is unhappy with his wife Marta (Adela Sequeyro) and his position. Tired of his drinking and sleeping around, Marta finally leaves with their baby son Juan. By the time Juan (Arturo Campoamor) has become a young man, the revolution has broken out. Commanding the battalion in the town, Colonel Carrasco receives a list of people involved in the revolution and has them all arrested. Hoping to secure the release of her son Felipe, a rich woman bribes a crony of the colonel to arrange a meeting. Unfortunately, the list has already been sent to the governor, who will undoubtedly order their execution, but the colonel’s friend Mr. Certucci (Luis Barreiro) lacks moral fibre and comes up with a plan to substitute someone else for the son. After cutting his captain in on the deal, Carrasco releases the son, and has the captain arrest someone who looks like Felipe. So, the captain arrests Juan while he is talking to his girlfriend, prompting Marta to seek help from her estranged husband. However, they arrive after he has gone to bed, and must wait until he wakes up at dawn. Unfortunately, the colonel oversleeps, and rushes to save his son from execution.

There is not a lot of historical context, aside from a picture of the dictator Huerta in the colonel’s office. However, the presentation of mass arrests, which led to mass executions, is understated. Huerta was not concerned with due process, so anyone suspected of rebel sympathies was likely to be arrested. Actually, the streets were not safe at night, regardless of whether or not one had rebel sympathies. Faced with a powerful revolution, Huerta responded by transforming Mexico into a military state, inflating the army to 200,000 men by seizing thousands of men as conscripts and women to work in the gunpowder factories, depriving factories and businesses of labor. Terrified of the relentless press gangs, young people dared not leave their homes after dark. The obsession with the military reflected the fact that Huerta’s life had been shaped by the army. Even as president, he spent his time surrounded by military men, inspecting troops and viewing parades during the day, and drinking with old soldiers at night.

Filmed in 1933, the acting is a bit stiff, but normal for the time period.

Several scenes present the sexual mores of the time. The young couple talk through the iron bars on her window and sneak kisses when no one is around. Clearly, times are changing, the mother repeatedly pulls her daughter’s dress over her knees during the interview with the colonel’s friend.

The negotiation between Colonel Carrasco and the mother and sister is surprisingly honest, and he seems genuinely conflicted or fearful, but is willing to sell out for the right price.

A twist ending transforms Prisoner 13 into a morality play. While the film does not say much about the revolution, it is interesting and must have been quite daring for the time.

Given the grim atmosphere, it is recommended for fans of Pre-code film and film buffs but not the average viewer.