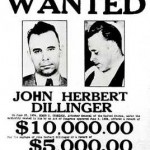 When outlaws like the Barker-Karpis Gang, the Clyde Barrow Gang, John Dillinger, Baby Face Nelson and Pretty Boy Floyd began to attract national attention in 1933, the FBI was an under-funded, amateurish organization. A series of celebrity kidnappings and the massacre of four law enforcement officials in Kansas City in June 1933 led to calls for a national police force, and the FBI would lead the war on crime. In 1934, the many bank robbers would be divided into five nice, clear groups: the family of kidnappers, the lovers on the run, the charming escape artist, the psychotic killer and the misunderstood country boy. A year later, almost none of them were still alive and the FBI was a national institution.

While the era was brief, it was very eventful, so here is a timeline to help explain the period.