When Henry II refused to name his eldest son Richard as heir to England and Normandy, Richard allied with Philip II of France, and soon defeated Henry, who died two days later on July 6, 1189. Richard had finally inherited the crown, but he was eager to join the Third Crusade, and reclaim the Holy Land from Saladin. A crusade would be insanely expensive but squeezing revenue from his territories of England, Normandy, Anjou and Aquitaine proved easier than arranging a treaty that would allow both Richard and Philip to go on crusade without fearing that the other would take advantage of the situation to attack. More troublesome was his younger brother John, who clearly lacked either the martial ability or the plotting skills required to seize the throne directly but might try his luck if Richard would be absent for months or even years. England would be administered by William Longchamp as chancellor, supported by four co-justiciars, including William Marshal, while John was forced to swear that he would not enter the kingdom for three years. Richard’s mother Eleanor was not officially regent but the justiciars knew that they were expected to defer to her advice. After a tremendous amount of organization, the English and French kings left in the summer of 1190. On the way to Palestine, Richard announced that his nephew Arthur of Brittany was his heir, which drove John to break his promise and return to England in 1191, where he seized castles and attempted to overthrow Richard’s chancellor. 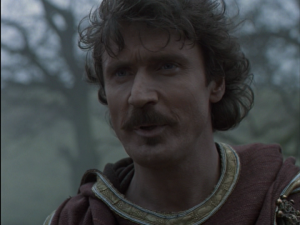 Mulch the Miller (Danny Webb) has the bad luck to kill a deer in the Royal Forest just as a lord holds a hunt, but he is saved by Sir Robert, earl of Huntington (Patrick Bergin), a Saxon who resents the Norman occupiers. Robert falls for Marian (Uma Thurman), Baron Daguerre’s (Jeroen Krabbe) niece, but she is betrothed to Sir Miles Falconet (Jurgen Prochnow). Friends with the baron, Robert agrees to publicly apologize. However, Falconer arranges for him to be sentenced to be flogged, which drives Robert to break with his Norman friend, who declares the earl an outlaw. Escaping from the castle, Robert and his friend Will Scarlett (Owen Teale) end up in Sherwood Forest. An encounter with John Little (David Morissey) on a log spanning a river does not go well for Robert, but John takes them to the outlaws’ hideout. Robert, now calling himself Robin Hood, leads them to rob Falconer. Rather than waste men chasing Robin, Daguerre raises taxes, blames Robin and posts a huge reward. When the outlaws steal the taxes, Daguerre realizes that he is doomed since Prince John is coming to collect the taxes. Unwilling to marry Falconer, Marian cuts her hair and pretends to be a young man, joining the outlaws as Martin. Prince John (Edward Fox) arrives and claims that he will rule since King Richard will likely never be released. Desperate to catch Robin, the baron lures him into a trap by faking a message from Marian to Robin, who nearly falls into the trap but is saved by Martin, who reveals his true identity. Tired of the outlaw life, Harry (Alex Norton) kidnaps Marian, but does not receive the reward he had expected. Robin convinces the outlaws to pretend to be fools on All Fools Day to gain entry to the castle, and rescue Marian. 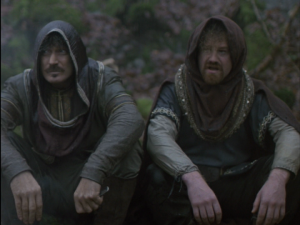 The opening scene where the earl of Huntington saves Mulch is taken from Errol Flynn’s Robin Hood (1938), and the film also portrays the outlaws as Saxons rising up against their Norman overlords. Since the film takes part of the plot from the Errol Flynn version, it has the same problem, namely that an earl would have many, many more followers and dependents than Will Scarlett. Although the Saxon-Norman feud is overdone, I appreciate the decision to have all of the Normans, including John, played by actors with an accent to distinguish them from their Saxon subjects. 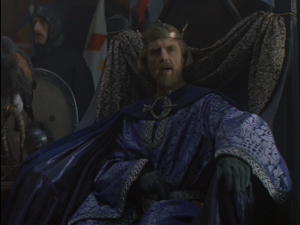 Speaking of John, the king’s younger brother arrives wearing a crown, demanding to be addressed as majesty, since he believes that Richard will never be ransomed. While the real John did tour the kingdom with a huge entourage, acting like he was king, his mother Eleanor of Aquitaine, chancellor Hubert Walter and leading noble William Marshal did not permit John to formally call himself majesty. In fact, Eleanor threatened to confiscate his castles if he declared himself king. Moreover, they oversaw the collection of taxes, in order to raise the intimidating ransom to ensure that Richard was freed. 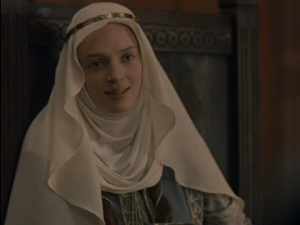 While the set design and costuming is appropriate for the time period, that appears to have been the limit of the historical research. When Harry kidnaps Marian and returns her to the baron, Marian informs Falconer that she is no longer a virgin, which actually should have ended her marriage prospects, since the legitimacy of her child would be suspect.

Admittedly, the Welsh were famous for their bows, but the chance encounter with the Welsh bowmaker would have been more dramatic if there had been scenes where the outlaws’ arrows had failed to pierce the armor of knights. 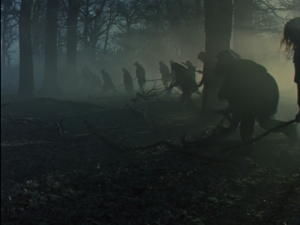 The opening scene of the animals in the forest is simply beautiful. It is the first time I have seen beaters, and I now understand why they are called beaters.

The earl’s escape from the baron’s castle is daring but surprisingly bloodless. In fact, the fight choreography resembles Disney live-action films of the 1970s. In particular, the scene where the outlaws steal the collected tax money is surprisingly convoluted and consists of the outlaws throwing dye on the baron’s guards, which is only slightly above the level of the Herbie the Lovebug movies. This desire to produce a family-friendly film is odd since director John Irvin had made The Dogs of War (1980), Raw Deal (1986), Hamburger Hill (1987) and Next of Kin (1989), all of which had more than their share of blood. I suspect that violence was toned down because the movie was intended to play on the Fox television network, and only had a limited release in movie theatres. 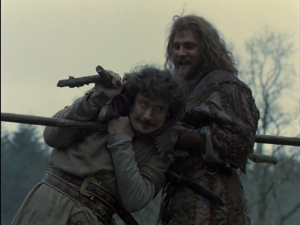 To be fair, the fight between John Little and Robin is one of the better parts of the movie, Robin is obviously outclassed, and John’s stream of insults are great.

The flirtation between Robin and Marian is charming, but she is not believable as a woman pretending to be a man. Robin is brave but not particularly bright, so Martin’s reveal of his true identity is hilarious. 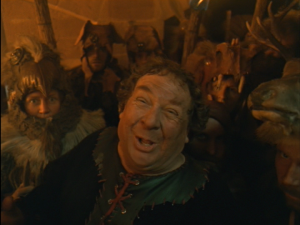 The climax of the movie is bursting with odd situations, as if the director became tired of making an average swashbuckler, and embraced every possible idea, no matter how far-fetched. Sometimes this approach works. Displaying remarkable talent for costume design, the outlaws pretend to be fools in order to gain entrance to the castle, which is a great scene. However, the discussion where Will convinces the baron to stop being an autocrat and pay homage to Robin, the native ruler of the land, seems forced. The final duel between Robin and Falconer is suitably entertaining, but Friar Tuck’s (Jeff Nutall) cheerful greeting to the dying Falconer “Welcome to Hell” is superb. Even the ending is strange, where the sun shines for the first time in the entire movie during the wedding. Still, it is entertaining and one of the more accurate films on the period, but was overshadowed by Robin Hood: Prince of Thieves, which was released in the same year.