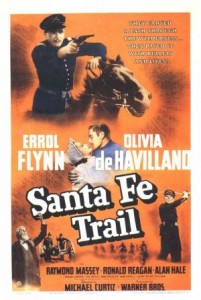 Slavery was an extremely divisive issue in the United States, therefore the Missouri Compromise was adopted in 1820 to prevent conflict. New states above the southern boundary of Missouri (excluding Missouri) would join the Union as a free state, while states located below Missouri automatically became slave states. However, the compromise was broken when Kansas Territory was opened to settlement in 1854. Since the residents of Kansas would vote whether to enter the Union as a slave or free state, this threatened the delicate balance between the two sides. The territory soon became a national issue as abolitionist and pro-slavery groups competed to send more settlers to Kansas in order to tilt the balance in their favour. Although the pro-slavery advocates had the initial advantage because Kansas bordered Missouri, a slave state, the north’s greater population made the difference and a large majority of residents voted in 1859 to enter the Union as a free state. While the period between 1854 and 1859 is known as Bleeding Kansas, less than a hundred people died (the exact number is debated by historians), but armed confrontations were common and zealots on both sides used the threat of violence to intimidate settlers into leaving.

Fuelled by a powerful desire to end slavery, abolitionist John Brown led several of his sons to kill a number of pro-slavery men in Kansas in May 1856. However, he became a national celebrity after directing the resistance against a powerful pro-slavery force at Osawatomie in August, and he soon attracted the financial support of wealthy abolitionists. Recruiting a small band of followers, he planned to seize a federal arsenal at Harper’s Ferry in Virginia to spark a slave insurrection that would destroy the slave-holding system in the south.

In 1854, Jeb Stuart, George Custer, James Longstreet, John Bell Hood, Phil Sheridan and George Pickett are all cadets at West Point, while Robert E. Lee is superintendant. When a cadet from the North deliberately provokes the Southern cadets by reading out loud from a pamphlet by John Brown that calls for the dissolution of the Union if slaves are not freed, Stuart (Flynn) responds that the South will solve the problem in its own time. The northern cadet is given a dishonourable discharge because he was working with abolitionist conspirators to spread abolitionism. Stuart and his friends are assigned to Fort Leavenworth, called Suicide Station, a frontier post in Kansas where officers often die or go missing. Custer and Stuart quickly become rivals for Kit Carson Halliday, daughter of the richest man in the territory.

The train carrying the officers passes through Missouri where they see slave catchers risk their lives trying to retake slaves who are being smuggled by abolitionists to Kansas where they will be free.

Kansas Territory was only opened to settlement in 1854 and the settlers will decide if it will enter the US as a slave state or free. Most of the settlers are from the south and are pro-slavery, but men come from the east specifically to fight pro-slavery supporters. Radical abolitionists led by John Brown and his sons have made the territory so dangerous that the cavalry was sent in. The officers first encounter Brown when he attempts to claim crates marked Bibles that actually contain rifles, but he eludes capture. The cavalry searches all over Kansas for Brown, until one of his sons betrays him in order to finally be free. After leading more than 100 men to burn a free stater settlement to the ground, the band of abolitionists is finally found and decisively defeated by the cavalry, but Brown views it as a sign that he should bring God’s wrath to the South.

Peaceful agitation had failed, so Brown plans to bring both sides to war in order to force a resolution. Even though Brown admits that his goal is civil war, northern backers give him the money that he needs to attack Harper’s Ferry and then lead an army of freed slaves throughout the South.

The screenplay is riddled with historical errors.

The six cadets are presented as being in the same class at West Point, which is completely inaccurate. Longstreet graduated from West Point in 1842 and was close friends with Ulysses S. Grant. Pickett graduated dead last in 1846. Custer also graduated last in the class of 1861. Hood graduated in 1853. Stuart graduated in 1854 and was sent to Fort Leavenworth in 1855, and did actually meet John Brown in Kansas, so he recognized Brown at Harper’s Ferry. Sheridan graduated in 1853, so he and Stuart undoubtedly knew each other. Furthermore, Sheridan was suspended for a year after he threatened a fellow cadet with a bayonet after a fistfight. Building the story around the friendship between Stuart and Custer is a peculiar choice, since Custer is famous primarily because he blundered into a massacre, while Sheridan was Stuart’s opposite number during the Civil War.

While Jefferson Davis had been Secretary of War in 1854, he left office when President Franklin Pierce lost the democratic nomination to James Buchanan, who would become president in 1856. Having been a senator before joining Pierce’s administration, Davis campaigned for and won a senate seat in 1857. Since Davis’ only two daughters were born in 1855 and 1864 respectively, it seems unlikely that Custer could have pursued a romantic relationship with either of them.

Jason Brown was not a teenager but a married man with children. Furthermore, he did not participate in either the massacre at Osawatomie or the raid on Harper’s Ferry.

The movie literally describes John Brown as the leader of the Abolitionists, whose bloody raids are terrorizing Kansas. As the lead villain, he does kill quite a few men but it is unknown if the genuine Brown ever directly killed a man, although he did instigate the murder of men. Moreover, Brown never had more than a small band of followers and was not one of the main free soil leaders in Kansas.

While the screen Brown’s authority is unchallenged by his sixty or more followers, the real Brown barely managed to scrape together twenty-one volunteers, most of whom were young, impressionable men. He only convinced them to accept the Harper’s Ferry scheme by threatening to withdraw as leader.

The Federal government did not learn about Brown’s seizure of the federal arsenal at Harper’s Ferry from a disgruntled member of his band, but because the townspeople had alerted nearby towns. The screen Brown’s force is large and well-armed, so the few townspeople that try to fight the raiders are easily wiped out. Actually, numerous militia units had arrived before the Federal troops, and any raider not safe in the arsenal was killed or captured. With hundreds of militiamen in the town, the few surviving raiders posed no threat, so the men soon became inebriated but the drunken slaughter of raiders trying to surrender or carrying a white flag is ignored by the movie. By the time the Marines appeared the raiders were all neutralized or holed up in the arsenal. Unlike the bloody fighting in the movie, the arsenal at Harper’s Ferry was stormed by a small number of Marines, who took few casualties.

Brown’s final fate is accurate but there is no mention of how his trial inflamed passions on both sides. Abolitionists thought that he was a martyr to the cause, while southerners saw him as proof that northerners planned to interfere with slavery. However, the screenplay does keep his prophetic statement that the crimes of the land could only be purged with blood.

Any movie starring Errol Flynn will have amusing banter, so Stuart and Custer critique each other’s lines as they woo the lovely Kit Carson Halliday. Unsurprisingly, Flynn blows Reagan off the screen in every scene. Jefferson Davis is given a large role presumably to alter his image from President of the Confederacy to patriotic defender of the Union, although it is true that he was speaking out against secession as late as 1858. Massey projects an impressive zealotry and he does capture Brown’s fixation with the Old Testament.

Although it paid lip service to impartiality, the screenplay is a partisan defense of the slave-holding south. In fact, the screenplay completely twists the situation. Brown and his followers are the villains in the movie, not the slave owners. Slave catchers are shown risking their lives to carry out their duty, even though they were primarily motivated by the financial rewards of returning valuable property to their owners. Even though the members of the Underground Railroad put their lives in danger by helping slaves escape from plantations, Palmyra is described as the “cancer of Kansas, and the western end of the underground railroad for slaves.” In fact, Stuart makes a simply mind-boggling statement: “the people of Virginia have considered a resolution to abolish slavery for a long time since they sense that it is a moral wrong. All they ask for is time.” Later in the movie, Stuart states that the south will solve the slave problem on its own, keeping its pride without being dictated to by the north, which is bizarre since Virginia seceded in order to preserve a way of life that depended on treating human beings as cattle that just happened to be able to talk.

Five of the real Brown’s recruits at Harper’s Ferry were black men, but none of the fictional raiders are black, presumably because showing black men risking their lives to help free slaves would have contradicted the screenplay’s desire to present blacks as being content with their situation. All of the black people with the strongest characters are slaves and want to remain slaves. Several slaves actually leave Brown so that they can go back to their peaceful lives. The slaves who stay with Brown are simpletons and incapable of taking care of themselves. No free blacks appear in the movie.

While it may seem hard to believe that any movie directed by Michael Curtiz and starring the time-tested romantic team of Errol Flynn and Olivia DeHavilland could be genuinely repulsive, this film is.