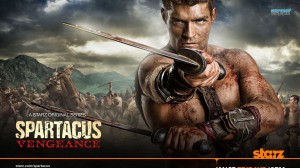 The second season of Spartacus took a few episodes to get its groove back but it had a stellar finish. When I heard that Liam McIntyre would take over the role of Spartacus after Andy Whitfield’s death from non-Hodgkin’s lymphoma, I wondered if the show would be the same. While McIntyre does not have Whitfield’s mojo, there is nothing wrong with the actor, and he starts to grow into his role as the series progresses, but I realized that the show might not have worked without Whitfield.

The first several episodes were limited by petty bickering among the gladiators, but it makes sense that most of the escaped gladiators did not initially have ambitions of freeing all of the slaves in the Roman Republic. Given the short life-expectancy of that profession, the average gladiator probably did not think long-term, so those episodes accurately reflected the confusion and disagreement among them. Furthermore, Spartacus’ revolt was actually the third large-scale slave revolt, officially called the Third Servile War. The first two had broken out on the island of Sicily and each had lasted for several years before the rebels were crushed. Given the track record of slave revolts, the gladiators had little realistic hope of true freedom.

Although I naturally sympathize with the slaves, their characters are simply not that interesting. Will Spartacus ever return Mira’s love or will he remain fixated on his dead wife? Will Nevea ever end up in Crixus’ arms? Will Crixus and Agron ever get along? These stories sound like they would not be out of place in a daytime soap opera. Conflict was introduced among the slaves but the audience knows that despite some grumbling and personality conflicts they will work together for the greater good because they are decent people. Decent is not an adjective that can be applied to the Roman characters. Viva Bianca’s Llithyia has matured from a scheming sexpot to a character with astonishing depth. Lucy Lawless as Lucretia managed to raise her acting game even higher than the first season. Craig Parker’s Gauis Claudius Glaber, the praetor assigned to end the revolt, has progressed from perpetually angry non-entity to a deliciously evil manipulator, who embraces his inner demon. To be fair, he has not been treated well by those around him, which highlights the gap between those born to wealth and everyone else. Even among the supposedly equal Romans, the rich lord it over the rest, regardless of ability. Finally, Nick Tarabay’s Ashur evolved into the series’ most fascinating character. His reaction to Lucretia’s attempt to treat him like an underling reveals his hatred of his status as a slave and a surprising thirst for freedom. Unlike Spartacus, Ashur has no illusions of overthrowing the Republic, so he will settle for improving the status of one slave, himself.

While Glaber and Ashur are acceptable villains, they lack the complexity of John Hannah’s Batiatus. Fixated on his own ambition, Batiatus ignored the growing resentment produced by his relentless plotting, but he bore no ill will to his gladiators, and he even freed Doctore, planning to hand over the ludus to him. To be honest, the show does not feel the same without his constant stream of curses like “Jupiter’s Cock” and “once again the gods spread open ass and insert cock!”

The harsh, unyielding reality of slavery was a key theme of the first season, since the writers needed to explain why the slaves were willing to risk death in order to be free. The second season approached a different area, showing that women, slave or free, had few rights. The female escaped slaves needed a man to gain protection and position, although Mira and Saxa, the psycho German, demonstrated that ability can change the equation. Even high-born Llithyia becomes the property of her husband after her father dies, and is unable to divorce him. Although Llithyia and Lucretia are forced to suffer humiliation due to their dependence on men, none of them draw a parallel with the slaves’ desire to gain freedom from the whims of their masters. In fact, none of the Romans ever question the idea of owning other human beings.

Faced with a major slave revolt, not a single Roman expresses sympathy for the conditions that drove them to revolt or suggests any improvements to their lives. Instead, the Romans react with brutality, crucifying a few slaves to encourage the rest to meekly accept their fate. At the same time, the slaves are increasingly open about their desire for freedom. Even though Ashur takes genuine pleasure in hunting his fellow slaves, he is motivated by a desire to move from favored house slave to player, not out of any loyalty to a master. However, not all of the house slaves wanted to be freed, fearing that they would not be able to survive on their own.

Furthermore, the writers showed that people who suffered severe trauma, such as rape or near death, do not simply shrug it off but face long-term consequences, and may never fully adapt if they lack a solid support network. Lucretia’s character arc was especially impressive, since she had to recover from horrible experiences while surrounded by a pit of vipers.

Compared with the first season and the prequel, Gods of the Arena, the fight scenes had lost a bit of their dazzle. I suspect that the fight coordinators from the first season were snapped up by other film crews, including the massive production for the two Hobbit movies, which are also produced in New Zealand. Moreover, the gladiator matches were held in a stadium and were meant to entertain, while the bitter struggle for survival offers fewer opportunities for stunning action choreography and artfully filmed torrents of spraying blood.

It is still the early stage of the rebellion, so both the numbers of slaves and the armies sent to destroy them are still relatively small, although still larger than those depicted in the show. I wonder how the producers will deal with the need for actual armies next season when the rebellion jumps in scale. Computer software created crowds in the stadium but massive battle scenes are more challenging.

Since there were no known survivors among the rebel slaves, the writers are free to do what they want with the slaves as long as they keep the main leaders alive. However, the third season will deal with the republic’s revenge for the defeat of praetors Publius Varinius and Glaber. They were relatively low-level members of the Roman ruling class, but more documented leaders will be involved in the next season, including Marcus Licinius Crassus, who has repeatedly been referred to as one of the most powerful men in Rome, and Gnaeus Pompeius Magnus.

The second season may have been uneven but Spartacus continues to peal back the glossy facade of the Roman Republic to reveal the inner corruption of a society built on slavery.