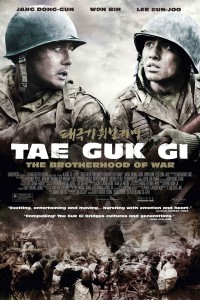 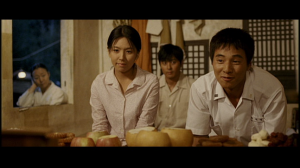 Young-shin and Lee Jin-seok in the front, Jin-tae in the rear, and their mother is at the window

A memorial services team is preparing the remains of soldiers for a proper burial, and informs an elderly man that some of the remains have been identified as his. The story then shifts from the present to Seoul, June 1950. Jin-tae Lee (Jang Dong-gun) shines shoes to pay for his younger brother Jin-seok’s (Won Bin) education. The family is poor but happy, and Jin-tae is engaged to Young-shin (Lee Eun-ju). Suddenly, North Korea invades, and both brothers are drafted. Hoping to win the medal of honor, which will ensure that his brother is sent home, Jin-tae repeatedly volunteers for suicide missions. While they were fighting on the Pusan Perimeter, the US Marines landed at Inchon, so it seems that the war is almost over. When Seoul is liberated, Jin-tae becomes a national hero and is promoted to sergeant, but Jin-seok can not accept his brother risking his life for him. As they move up to the Chinese border, they pass through entire villages that have been slaughtered by the retreating NPA, so they stop taking prisoners. At one point, they come across Yong-seok (Jeon Jae-hyeong) an old friend who was drafted by the KPA. Jin-tae would execute him but Jin-seok stops him. 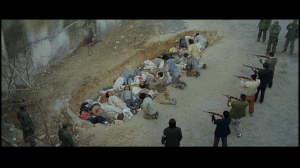 In November 1950, they are moving north but there are rumors that the Chinese will intervene. Suddenly, they learn that endless waves of Chinese have forced other regiments in the division to retreat. They end up in Seoul, where Jin-seok finds Young-shin, but she is taken away by Rhee’s goons because she had attended Communist rallies in exchange for food. Learning that she will be executed, the brothers try to rescue her, but are arrested. The Chinese attack, and Jin-tae is captured, thinking that Jin-seok was killed. Actually, Jin-seok had escaped, and encounters his brother during the chaos of a major battle, but they are separated again after a brief reunion.

The movie covers the first year of the Korean War, and is a surprisingly accurate presentation of the chaos of the invasion, the desperate struggle for survival at Pusan, the stunning victory at Inchon, and the shock of the Chinese intervention. As the story progresses, the members of the brothers’ unit become solid soldiers, which reflects the situation in the ROK army as a whole. After the initial bedlam of the invasion, the ROK army became increasingly professional. Admittedly, some of the divisions were better than others, but most fought well after they had been re-organized and the senior commanders had been changed. Since the majority of English-language books were written by Americans, they naturally focused on the American view of the war, and ignored the contribution made by the ROK army. Tae Guk Gi understandably intends to remedy the situation, and succeeds. 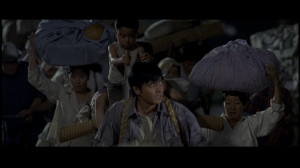 As they prepare to leave Seoul, Jin-Tae and Young-shin argue about how much to take with them. On the surface, it is a touching argument between a young couple, but it also reflects the fact that the nation had barely recovered from the Japanese occupation and the Second World War. They were just dragging themselves out of poverty, now they are refugees, and their only possessions are what they can carry on their backs.

Band of Brothers-level scary, the battle scenes are brutal with blood and body parts flying everywhere, so they are not for the weak at heart. In fact, the emphasis on hand-to-hand combat becomes distracting. 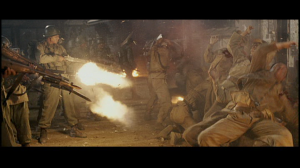 When the soldiers stop taking prisoners, their actions are not sugar-coated. It is a merciless slaughter, enemy soldiers are lined up against the wall and shot. Furthermore, Rhee’s death squads are shown roaming Seoul and executing anyone connected to the Communists. Although the stand-off over Jin-Tae’s fiance should have happened much earlier, during the initial liberation of Seoul, it is a correct depiction of Rhee’s increasingly dictatorial government, and its use of the invasion as an excuse to kill or imprison any critics.

The scene where the Chinese attack is the first time that I have seen it done right, waves of Chinese soldiers in ranks, covering entire hills. Realizing that coordination between the American and ROK divisions was poor, the Chinese had targeted the ROK divisions, several of which collapsed under the overwhelming assault. However, the story is told from the perspective of the members of the brothers’ unit, so there is little explanation of the war itself. 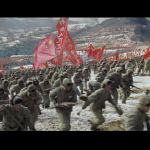 Since all of the males in South Korean are required to perform military service it was easy to get extras who did not need training.

Faced with a limited budget, Director Je-kyu Kang fought to ensure that a scene with refugees fighting to climb onto a steam train remained in the movie. He was right, since that scene struck a chord with the generation that had experienced the war, who remembered doing exactly that when trying to escape. 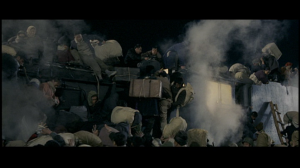 The movie is about Koreans, so Americans are always referred to but never shown, and the Chinese only appear in one scene.

Kang’s previous film Shiri (1999), about North Korean agents who had infiltrated South Korea, and the efforts of South Korean intelligence officers to stop their plan to assassinate many senior members of the government, was a big hit and the first major film to examine the difficult issue of Korean reunification, therefore it should not be surprising that he decided to make the first large-scale film about the Korean War. After watching a documentary on the Korean War, the director found himself crying, so he decided to make the movie, especially since none of his projects since Shiri were moving forward.

A surprise hit, it was expected to fail because it was too big and they would not have enough money or it would bomb at the box office.

The early scenes before the invasion are quite charming. It is really cute how the young couple sneak kisses in secret, while the scene where the two brothers speak to the shrine of their father to update him on the family situation is excellent.

No disrespect to the supporting actors, but the other members of the platoon are simply talking scenery, therefore it is difficult to care about them, which means that the viewer is less involved in the battle scenes, which simply overwhelm the senses, although they are brilliantly staged. It is as if the screenwriters wanted to ensure that the audience cares only about the brothers.

The first big-budget movie to look at the Korean War from South Korea’s perspective, Tae Guk Gi is outstanding. The film’s greatest drawback is the relentless melodrama. The mother was portrayed as mute in order to make her character even more depressing. The numerous long, drawn-out death scenes were wearying, and the story spends way too much time on the brothers. Honestly, the crying and screaming are a bit much. There are tearful goodbyes at the train station, a scene where one of the brothers cradles his slowly dying lover, and several fights between members of the same unit. The conflict between the brothers is especially tiresome, they spend much of the movie arguing or fighting with each other. It is no exaggeration to state that aside from the tranquil interlude at the beginning, the rest of the movie is a relentless battle, either with bullets or emotions.