When the North Korean People’s Army (NKPA) crossed the border on June 25, 1950, its large, well-trained army steamrolled through the unprepared ROK forces. President Harry Truman won the support of the United Nations for the defense of South Korea, assigning the military response to General Douglas MacArthur, commander of the American occupation forces in Japan, but the NKPA had gained control of all of Korea by August except for a small perimeter around the port of Pusan. The NKPA had already burned itself out with repeated frontal attacks when an amphibious landing at Inchon caught the North Koreans completely by surprise. Seoul was recaptured on September 25, and the NKPA began to disintegrate.

Deciding to reunify Korea by force, an overconfident MacArthur dismissed China’s warning that it would not permit American troops near the Yalu River, the border between China and North Korea. The entry of hundreds of thousands of Chinese ‘volunteers’ into Korea in late November transformed the war. After a series of Chinese offensives and American counter-offensives, the lines had stabilized near the 38th Parallel by mid-summer 1951. The negotiations dragged on until mid-1953 because the Chinese and NKPA would not accept the right of Chinese and North Korean PoWs in UN custody to refuse repatriation to their home countries.
Read More… 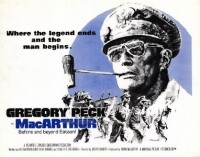 Adopting a relatively even-handed approach, the movie covers MacArthur’s career throughout WWII, the American occupation of Japan and the Korean War. While the story does show MacArthur’s self-fixation and growing paranoia, it skips over many of his mistakes because they would have required a much, much, much longer movie. Unfortunately, the limited budget meant that the movie was filmed in the United States, not Asia. Worse, most of the actors are second-rate, and the low budget meant that the battle scenes looked like they were filmed on a studio lot. Although the film looks like an ABC movie of the week in the early 1980s, it is the only full-length presentation of a controversial and extremely influential American general. Read More…

Having seen WWII firsthand, including the Battle of Midway and the Normandy invasion, director John Ford was determined that his first post-war film would show the stark truth of the failed defence of the Philippines in 1942. Although set in the Philippines, much of the movie takes place in shadowy interiors as the Japanese siege of Bataan gradually tightens. The movie may appear unbearably wholesome to modern viewers but it showed post-war audiences the hard choices and sacrifices that had been made early in the war. Based on the real-life exploits of Lieutenant John Bulkeley, commander of a PT squadron in the Philippines, Bulkeley himself was surprised by the authentic feel of the movie. Read More…

Numerous film critics have ranked Inchon as one of the worst movies ever made. Inchon is not horrible, but it is painful. Set during early days of the Korean War, the movie is an epic tribute to General Douglas MacArthur. Sun Myung Moon, founder of the Unification Church and main financial backer of the film, later stated publicly that he wanted the movie to portray MacArthur and his love of God, as well as his battle against tyranny and communism. He succeeded. Unsurprisingly, director Terrence Young blamed the final mess on the producers’ interference. Probably best-known as the director of the first two films in the Bond series, Terrence Young’s career had started to decline. It did not bounce back after Inchon. Read More… 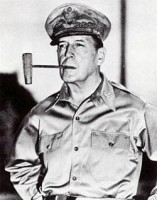 Douglas MacArthur (January 26, 1880-April 5, 1964) was a controversial American general. The son of a famous general, MacArthur was driven by a limitless ambition. Displaying suicidal bravery and remarkable leadership ability, he became a brigadier general during WWI. Continuing to rise, MacArthur became chief of staff in 1930, but was publicly criticized following the brutal eviction of the Bonus Marchers, WWI veterans camped out in Washington. Denied a second term as chief of staff, it seemed that his career was over and he retired from the U.S. Army in 1937. When war with Japan seemed inevitable, President Franklin Delano Roosevelt recalled MacArthur to active duty in July 1941 and gave him command of the Philippines. Taken by surprise by the speed of the Japanese invasion in late December 1941, MacArthur was evacuated to Australia where he oversaw the island-hopping campaign and eventual recapture of the Philippines. Following the Japanese surrender, MacArthur was appointed American viceroy, and implemented sweeping changes in Japanese society, economy and politics. Taking command of the American response when North Korea invaded South Korea in 1950, an amphibious landing at Inchon ensured victory, but he permitted American forces to approach the border with China, which provoked a massive Chinese intervention. After repeatedly defying President Harry Truman, he was relieved of command in 1951. Failing to win the Republican nomination for president, MacArthur suffered the humiliation of seeing his former aide, Dwight Eisenhower, become president. Retreating from public life, MacArthur died on April 5, 1964 due to kidney and liver failure. Read More…

Although the real trial was the O.J. Simpson trial of its time, The Court Martial of Billy Mitchell (1955) is a disappointment, where the actual court case is completely rewritten to match Gary Cooper’s noble persona. Read More…