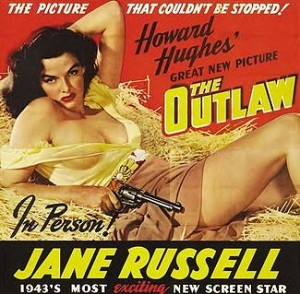 When notorious gunman Doc Holliday (Walter Huston) arrives in Lincoln County, Sheriff Pat Garrett (Thomas Mitchell) is not worried since Holliday is his best friend. However, that friendship is threatened by a bond that forms almost instantly between the older Holliday and the young William Bonney (Jack Beutel). Trouble develops when Bonney kills a man who had reached for his gun first. Since there were no witnesses, Garrett concludes that Bonney is guilty and tries to arrest him, but Holliday sides with Bonney, killing two deputies in the process. Bonney is wounded during the shootout, so Holliday takes Bonney to his girlfriend Rio’s (Jane Russell) house, unaware that she had already tried to kill Bonney, blaming him for her brother’s death. Holliday lures Garrett’s posse away, but Rio and Bonney soon fall in love. Figuring out the situation, Holliday is understandably angry when he returns, but he still accompanies Bonney to Fort Sumner, which is outside Garrett’s jurisdiction. Angered by Bonney’s treatment of her, Rio betrays them to Garrett. They all end up in Fort Sumner where the brimming tension between Holliday and Bonney is finally resolved in a dramatic showdown.

The movie has little to do with the facts, other than Pat Garrett killed Billy the Kid. The script never mentions the Lincoln County War, and the real Garrett had known Bonney for a considerable period of time before he became sheriff. The genuine Doc Holliday died when he was thirty-six years old, but Walter Huston was sixty when the movie was made, twenty-four years older than the real man. Holliday lived in Tombstone, Arizona when he was riding with Wyatt Earp, and died in Colorado from tuberculosis, six years after Bonney.

Furthermore, the screen Bonney’s character bears little resemblance to the real man. Beutel’s Bonney is dark and moody, and does not trust women, even though the actual Bonney was famous for his charm and success with women. According to Jane Russell, director Howard Hughes was unsure how to direct, so he unconsciously modelled Bonney on himself.

Bonney is all youthful bravado, while Holliday is older and astonishingly easy-going. The script includes many humorous exchanges between Bonney and Holliday that probably sounded funny on paper, but there is no real chemistry between the two men. The real Bonney could charm anyone, but Beutel’s Bonney is annoying with no sense of gratitude. In fact, the screen Bonney is repulsive, thanking Garrett for saving his life by making a move on Rio, although the real Bonney apparently did sleep with his friends’ wives.

Holliday is apparently unaware that Bonney had killed his girlfriend’s brother, which does not say much for their relationship. It seems like the death of her brother would be a topic of conversation.

Jane Russell was only nineteen when she made the film, and she is nothing like her later fast-talking self. The camera focuses repeatedly on Russell’s remarkable cleavage, understandably since she had been hired for the size of her breasts. Producer/director Howard Hughes had launched a nationwide search for an actress with a large bust, and found what he needed in Jane Russell. As an engineer with a powerful fixation on breasts, Hughes designed a cantilevered bra to better present Russell’s breasts but she found the bra so uncomfortable that she never wore it, placing tissues in her bra instead to satisfy Hughes.

Howard Hawks was the original director, but pulled out to direct Sgt. York instead. It is doubtful that his involvement would have improved the film. Hawks’ decision to leave the film was influenced by frustration with the daily arrival of suggestions from Hughes. When Hawks left, Hughes kept his footage, but shut down the production for a couple of months while he prepared to direct the film himself. Hughes did not know how to direct actors, so he simply did endless takes, hoping that one of them would have what he wanted. One scene had more than one hundred takes. As a result, a movie that should have been finished in two months, took a total of nine months. Since it was the first picture for Beutel and Russell, the process turned them into robots, which helps explain Beutel’s stiffness. The actors were paid by the week, and Walter Huston was receiving a high salary, so he simply did his job and watched his bank account grow. However, the endless takes drove Thomas Mitchell crazy, which explains why Garrett was literally shaking with fury at the end of the movie.

Shot by famous cinematographer Gregg Toland, who had finished John Ford’s The Grapes of Wrath (1940) the previous year, and would next handle the visuals for Orson Welles’ Citizen Kane (1941), it is a gorgeous film. A silly, silly, silly story but really nice to look at.

Holliday is presented as the hero even though he broke his word to his old friend Pat Garrett and killed numerous innocent men to save Bonney. The audience is supposed to sympathize with Bonney even though he was a grade-A dick for the entire movie. I was honestly rooting for him to die.

Howard Hughes wanted a movie with sex and he made one. The first movie to defy the Production Code, it took two years of cuts and revisions to satisfy the censors. Even so, the film attracted so much attention that the censors banned it after a week in 1943, and it only returned to theatres three years later, where it was a huge success. For those interested in cinema history, the movie is worth watching.