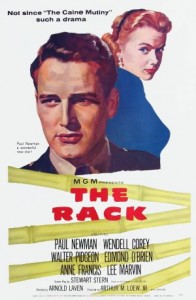 Returning home after spending two years in a PoW camp, Captain Edward Hall Jr. (Paul Newman) is in rough shape, both emotionally and physically, but he receives little emotional support from his family. His father, Colonel Edward Hall, Sr. (Walter Pidgeon), is uncomfortable expressing emotion, and Aggie Hall (Anne Francis), his sister-in-law, tries to be cheerful but can barely hide her resentment that he survived when her husband did not. Unknown to his family, Hall is being investigated for a court martial for collaboration with the enemy, and is charged immediately after being released from the hospital.

Testimony from witnesses reveals that Hall gave lectures on behalf of the Chinese and wrote messages asking his fellow soldiers to surrender. Captain John Miller (Lee Marvin)’s testimony is especially damning since he was head of an escape group that was captured because Hall had informed on them. The defence attorney, Lt. Colonel Frank Wasnick (Edmund O’Brien), launches a spirited counterattack, providing examples of Hall’s physical courage, and explaining that he had been promoted from lieutenant to captain and received a silver star before he was captured. Supported by Aggie, who urges him to defend himself, Hall gives his version of the events presented by the witnesses. Figuring out that he had only pretended to collaborate in order to win better treatment for other PoWs, the Chinese threw him in solitary confinement for six months, but he only broke when he learned that his brother had been killed. Wasnick argues that Hall was one of the first victims of a new type of mental torture where the Chinese deliberately broke down the soldiers and denied them solidarity. Unlike the other officers, Hall was not physically tortured, he was mentally tortured. Although found guilty, he has reconciled with his father.

On the surface, the debate is whether Hall was broken or allowed himself to be broken, but the main purpose of the film is to reinforce the idea that an insignificant number of American PoWs collaborated. Moreover, the few who did collaborate did so because they had been subjected to brainwashing by the Chinese, not because they sought better treatment or personal gain. The script was written to ensure approval by the military censors, therefore the number of collaborators is a tiny fraction of the real number. Hall is only one of the forty cases that were left after hundreds had been investigated, and he was broken after months of psychological warfare. Initially doubtful, Major Sam Moulton (Wendell Corey), the prosecutor, only agrees to investigate after he sees the huge pile of testimony from fellow prisoners. Most important, Hall only broke because his father never hugged him, thus implying that none of the PoWs really betrayed their nation or were even selfish. Emotionally damaged, they were easy prey for the Chinese.

Adopting a very sterilized view of the real situation, The Rack whitewashes the genuine problem of large-scale collaboration among American PoWs during the Korean War. The defence attorney’s claim that the Chinese had deliberately denied the prisoners solidarity is correct. Ignoring the Geneva Convention with its precise rules for the treatment of prisoners, the Chinese employed the same crude indoctrination techniques that had proven so successful with Nationalist troops during the civil war. The prisoners’ ragged clothes were replaced with Chinese uniforms to weaken their identity as soldiers, and they were divided into platoons with Chinese-appointed leaders. Any sign of listening to their own officers or NCOs would be punished. NCOs or officers who refused to recognize Chinese authority would receive solitary confinement. This approach produced negligible results with western PoWs, since it was obvious that western society offered a better life than the poverty of Chinese soldiers. However, the situation did cause many men to collaborate in the hope of better conditions.

The key issue is the number of cases. Unlike the fictional forty in the movie, the US army determined that roughly one in seven of all American PoWs was guilty of serious collaboration. Furthermore, twenty-one Americans refused to be repatriated at the end of the war. Instead of shedding light on an embarrassing but real problem, the movie avoided controversy, and reassured complacent audiences that everything was all right.

Comparisons with Time Limit (1957) are hard to avoid, since both movies involve the court-martial of an American officer accused of collaboration. However, Time Limit is a much superior film, and a much more honest film, even though it was made only a year later.

Still struggling to get his career started, Newman threw himself into the role, working closely with the screenwriter to build his character. There is no denying the intensity of Newman’s performance, but the emphasis on the character’s daddy issues is hard to take. Learning that the charge of collaboration against Hall is true, his father screams that he wishes that he had died. Hall responds that he sold his soul for a dirty blanket and three hours of sleep. The exchange sounds powerful, but Newman acts more like a rebellious teenager, than a war veteran.

The film is not that great but the ending is a bit surprising.