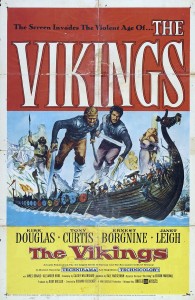 The first recorded Viking raid occurred in 793 AD, when Vikings looted the wealthy, isolated monastery at Lindisfarne. The sudden appearance of the northmen caught the seven kingdoms of England off-guard. The Vikings were terrifying because no one knew anything about them, since their home was at the edge of the known world. Although the Vikings had been raiding their neighbors for a long time, a huge advance in shipbuilding during the eighth century had greatly expanded their range. Earlier ships were meant to be rowed along the shoreline, but would easily capsize in rough weather. At one point, they suddenly invented the keel, which stabilized the ship and gave sufficient foundation for a mast, transforming propulsion from oars to sail. Unlike the rest of western Europe, where people rarely went further out to sea than a few miles, the Vikings started to explore, sailing thousands of miles. Why did the Vikings suddenly start raiding so far away? The common explanation is that overpopulation and entrenched royal dynasties drove young men to seek fame and fortune. Another likely factor was the steady growth in international trade since the seventh century, and the establishment of popular trading ports at London and York in England; Dorestad on the Rhine; and Quentovic, south of Boulogne. Envious of their neighbors’ wealth, the northmen might have simply decided to take the riches for themselves. One of the most feared Viking leaders was Ragnar Lothbrok, who led a huge raid on Paris in 845AD. According to legend, Ragnar’s career came to an end when he was shipwrecked in Northumbria and killed by King Aella, which drove his sons to invade England to avenge him in 866AD.

Killed in a raid by Ragnar Lothbrok (Ernest Borgnine), King Edwin of Northumbria is succeeded by his cousin Aella (Frank Thring). Unknown to Aella, Edwin’s queen had been raped by Ragnar and gave birth to a son. Aware that Aella would view the boy as a threat to his rule, the child was sent to be raised overseas, but was enslaved by Ragnar. Twenty years later, Aella plans to marry Morgana (Janet Leigh), the daughter of the king of Wales. When a hawk belonging to the slave Erik (Tony Curtis), claws out an eye of Einar (Kirk Douglas), Ragnar’s only legitimate son, Ragnar orders Erik to be drowned by the incoming tide, but he is saved by a magical wind that pushes back the tide. Ecbert (James Donald), an exiled Northumbrian noble, notices that Erik has a jewel that proves that he is the rightful heir to Northumbria. Hoping to receive a ransom, Ecbert arranges for Morgana to be captured, but Einar falls for her. An indulgent father, Ragnar gives Morgana to Einar, instead of ransoming her, but she is rescued by Erik, escaping to Northumbria with him and his friends, the wise woman and a mute black slave with a lodestone. Ragnar had been captured during their escape, and will be thrown unarmed into a pit of wolves but Erik gives him a sword so that he can enter Valhalla. Eager for revenge, Einar is forced to accept Erik’s help, since he promises that his magic stone will guide them safely through the fog. Although the two men cooperate to defeat Aella, one has to die since they both want the same woman.

Admittedly, little is known about the Vikings before the invasion of England in 866, but even by relaxed standards, the script is not very informative.

The narrator explains that the northmen had no compass so they were terrified of fog. The fear of fog is understandable, but overstated. The Vikings may have found a lodestone and used it for navigation like in the film, or they may simply have accepted fog as one of the hazards of sailing on the open sea in the days before GPS and weather satellites. Regardless, they must have dealt with situation somehow since they frequently raided England.

Aella’s cousin Ecbert had to flee Northumbria because he has been conspiring with the Vikings to ensure that other lords were raided, not him. Aside from the dubious suggestion that the Vikings needed inside help to raid England, the logistics seem daunting. How did Ecbert send messages to Ragnar? Since it took several days to sail to Denmark, would not any information be out of date by the time Ragnar received the message about a vulnerable lord and gathered men for a raid?

To be fair, there is a glimmer of accuracy in the script. Ragnar’s sons did invade England at the head of a huge army that was called the Great Heathen Army in 866 AD, and Northumbria was the first English kingdom to fall, since it had been weakened by a civil war. King Aella was killed, and Ecbert, a Northumbrian noble, was chosen to replace him, presumably as a puppet.

When Einar leads a powerful fleet to avenge Ragnar, Aella is confident that the savage Vikings can never capture his mighty castle but is proven wrong, thanks to Einar’s remarkable physical dexterity. Although the scene of Einar climbing a gate on a ladder of axes is cool, the Vikings could never have captured such a fortress, and would have either besieged the castle or simply looted the surrounding countryside. If Aella’s castle looks surprisingly solid for ninth century England that is because it is a French castle built in the thirteenth century.

Stunning scenery does not distract from the gaping plot holes. Did someone spill coffee on the only copy of the script, it feels like parts are missing. After killing Einar, Erik then somehow becomes leader of the Vikings and seems to have taken control of the fortress. Ecbert simply disappears after Erik’s victory, so he is unable to explain that Erik is the rightful king of Northumbria, and why would the Vikings follow Erik, who was a slave?

Learning of his father’s death, Einar leads a powerful fleet of … three ships to avenge Ragnar. That is what CGI or a bigger budget are for. To be honest, more extras would not have saved the film, since the battle scenes are lame. Large numbers of men run around a lot waving swords but it is hard to understand what is going on. Admittedly, the final duel between Erik and Einar is well-staged.

The numerous scenes of drinking and tests of strength are the most enjoyable parts of the movie. At one point, Einar and his men run the oars, which is fun to watch, especially since director Richard Fleischer originally wanted a stunt man to do the scene, but Douglas insisted that he run the oars himself.

One of the best scenes in the movie is the removal of Erik’s slave collar when he is freed by Ecbert. After holding the collar in his hands for a moment, Erik throws it into the fjord. It is as if the film momentarily changed emotional gears, but this burst of mature storytelling does not last long. That scene and a scene early in the film when the priest finds the sobbing queen after she had been raped by Ragnar hint at what the movie could have been with a better script. Interestingly, Curtis and Douglas would play slaves in Spartacus two years later.

Erik saved Morgana because he fell in love at first sight, and sweet talks her even though she is a Christian and he is a heathen. Married in real life, Curtis and Janet Leigh play well together.

In fact, the Vikings are treated well. Erik gives the dying Einar a sword so that he can enter Valhalla, screaming Odin as he dies.

It is actually touching that Einar truly loves Morgana and is genuinely hurt that she loves Erik. Having learned of Erik’s true parentage from from a Northumbrian priest, Morgana tells Einar that Erik is his brother, which causes him to hesitate during their duel.

It is not a great movie. When given good material like Soylent Green (1973) or Tora! Tora! Tora! (1970), Fleischer could make a great movie, but many of his movies are mediocre, and this is one of them.