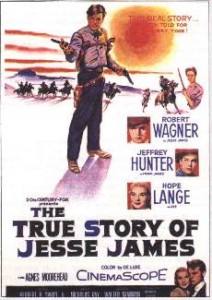 Most of the members of the James-Younger Gang had ridden with Southern guerrillas William Quantrill and Bloody Bill Anderson along the Missouri-Kansas border region during the Civil War (1861-1865). In retaliation for the guerrillas’ raid on Lawrence, Kansas, which left 185 men and boys lying dead on the ground, the section of Missouri that bordered Kansas was completely depopulated to deprive the guerrillas of their support network. When the war ended, the guerrillas and their families tried to rebuild but they suffered frequent harassment and found it nearly impossible to obtain loans from Northern-controlled banks. Hardened by years of partisan warfare, a number of them began robbing banks, initially under the leadership of Archie Clements. After his death in a shootout in December 1866, Frank and Jesse James, and Cole Younger became the core of the gang.

After the James brothers are the only members of the gang to escape a disastrous raid on Northfield, Minnesota, an obituary writer wonders what made Jesse turn out so bad, and the rest of the film uses flashbacks to answer that question. Claiming that Jesse is a good man driven to evil by the Yankees, his mother claims that Jesse joined William Quantrill’s guerrilla band after receiving a beating from Union soldiers. When Jesse is badly wounded while trying to surrender two weeks after the war ended, he is nursed back to health by his relative Zee. Although he tries to settle down with Zee, northern sympathizers torch their house because he rode with Quantrill. Several former guerrillas have suffered the same treatment, so Jesse suggests that they rob the banks that are owned by northerners to raise a stake for their farms.

Although they had only planned to rob one or two banks, they develop a taste for the good life and eventually graduate to robbing trains. Remington, head of the Remington Detective Agency (obviously modeled on the Pinkerton Detective Agency), had gotten a tip about the James farm, and his agents throw a bomb into their house. The bombing creates such outrage that the governor offers them amnesty but Jesse’s thirst for revenge costs them the amnesty. Soon afterwards, they set off for Northfield even though it is far away but Jesse browbeats the rest of the gang into accepting his decision by threatening to replace them.

After Jesse fakes his death, he makes it home and swears to give up robbing. Despite his plan to buy a farm, he has already been betrayed.

An extremely pro-south movie, Jesse’s descent into outlawry is presented as a reaction to the treatment he received from northern sympathizers. In fact, he was a diehard supporter of the Confederacy who only surrendered because he was too badly wounded to keep fighting. Despite claims that the James family never owned a slave, the real family had owned several. The scene where Jesse was whipped by a neighbour is a watered-down version of the real event. Thirteen-year-old Jesse had been beaten badly when he tried to stop Union soldiers from hanging his step-father to force him to reveal the location of Frank, who was part of Quantrill’s band.

There is no mention of the gang’s huge support network of southern sympathizers, who viewed their robberies as a continuation of the Civil War. While it is true that the banks were controlled by Northern carpetbaggers, there was no Federal Deposit Insurance at the time, so the gang was stealing farmers’ life savings to fund their luxurious lives. The movie points out that many of the crimes attributed to the James-Younger Gang were actually committed by others, which is correct. Even today, the fluid membership of the gang means that no one knows exactly which banks they robbed. It may seem that the townspeople of Northfield responded surprisingly fast when they learn that the bank is being robbed, but that is actually what happened. While the basic portrayal of Jesse’s murder is accurate, he had not sworn to give up robbing, but was planning another job with the Ford brothers, who were part of the gang’s entourage.

Nicholas Ray had directed Rebel Without a Cause (1955) and he had an affinity for directing movies about troubled young men, but the movie lacks creative spark. The arguing between Frank and Jesse is a little infantile, and did not happen, but Hollywood likes conflict between lead actors. Furthermore, the film suffers from significant technical problems. The clouds that are used to start the flashbacks are simply embarrassing. Much of the acting is horrible, and the woman playing Zee appears to be reading her lines from a card being held off stage. The movie is a jarring clash of the innocence of the studio system in its prime and a more realistic approach to filmmaking that would become common during the sixties.

It is a remake of the Henry King production with Tyrone Power. Oddly enough, it is more accurate than the original but less enjoyable.