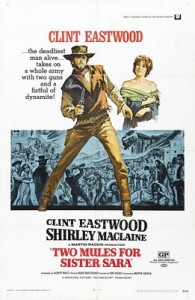 A man named Hogan comes across three American thugs who are raping a nun. After killing the thugs, he finds that the nun, Sister Sara, is working with the Juarista rebels against the French. Although he has already agreed to help the Juaristas, Hogan is initially unwilling to travel with a nun, but the two find themselves cooperating to help the Jauristas capture a French fort.

Although the movie is set during the French Intervention in Mexico, there is basically no context, and Maximilian is never even mentioned. The Jauristas’ resistance against French invaders serves as a background for the evolving relationship between the two lead characters. However, the presentation of the situation in Mexico is accurate. Having suffered a series of crushing defeats by the French, the Jauristas were in dire straits, and had no more real armies, but an abundance of guerrillas.

The script is clear, the French are the villains because they oppress the Mexican people in order to make Mexico a French colony. There is no mention of the conservative Mexicans who supported Maximilian, but they were mostly in the larger cities, while the story takes place in the countryside. The evil nature of the French is confirmed when they execute a Jaurista, who dies shouting “Viva Jaurez,” in front of his sobbing wife. The French did kill Jauristas whenever they found them, and there was even a unit made up of tough French, Mexicans and foreigners dedicated to the task.

Unlike earlier movies on the French Intervention in Mexico, the French cavalry are armed with rifles, not lances or swords, and are competent.

Budd Boetticher wrote the story with Robert Mitchum and Deborah Kerr in mind. Eastwood became involved when Elizabeth Taylor wanted him to play the lead, and Eastwood brought in Don Siegel to direct. Unfortunately, when the studio refused to film the movie in Spain, which would enable Taylor to spend time with her husband, Richard Burton, she was replaced by Shirley MacLaine. While Taylor could pass as a Mexican nun, MacLaine could not, so her pale skin was explained by her being an American expatriate. Unlike Taylor, MacLaine was not meant to spend all day in the blazing sun, so someone was hired to hold a huge umbrella over her between scenes. MacLaine was initially difficult to work with and drove Siegel to walk off the film until she apologized and became more serious about her performance.

MacLaine is miscast but she is convincing as an irritatingly persistent nun, who immediately engages in a battle of wills with Hogan. The sexual tension is great, Eastwood conveys sexual frustration very well, and there is a good chemistry between the two leads.

The story moves at its own pace and scenes are given time to develop. The arrow removal scene took a bit more than ten minutes, but it would have been handled in seconds in most Westerns. While there is no lack of action, there is a surprising amount of humor, mainly caused by the constant arguing between the two leads. Furthermore, there is an interesting running debate over miracles vs accidents.

The bad-tempered tough guy who is civilized by a charming female companion when they are unexpectedly thrown together is not a new plot device but it works here and has a surprising, unexpected twist.

Filmed in Mexico, the landscape is beautiful but harsh and unforgiving. There are several great sets, especially the old rundown church.

It is one of Ennio Morricone’s better soundtracks, and both Sister Sara and Hogan have their own theme music.

Although Budd Boetticher and Siegel were friends, Boetticher was disgusted with the changes made to his screenplay, especially Eastwood’s cynical protagonist, who was very similar to his characters in the spaghetti westerns with Sergio Leone. With a soundtrack by Morricone, a Hispanic setting and an amoral protagonist who wears a poncho and smokes cigars, the movie does appear to be an imitation of the spaghetti westerns. However, this criticism is unfair since Eastwood’s acting style was evolving, and he played a more vulnerable character than he had for Leone.