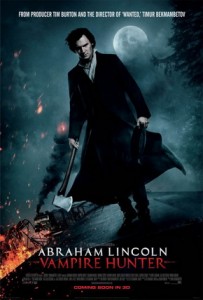 When I first heard about Abraham Lincoln: Vampire Hunter, I thought that it was an alternative history where he hunts vampires, instead of pursuing a political career. When I learned that it was a secret history of his career as a vampire hunter, I hoped that the movie would employ horror to highlight the inhumanity of slavery by showing plantations with barns filled with slaves locked in stalls, where they are drained of blood by their owners. Instead of whites using blacks as a free, self-renewing source of labor, the black slaves would be a free, self-renewing source of food. Disobedient slaves could be threatened with being sent to the barn, rather than receiving a whipping. Sadly, the potential for a harrowing look at the evil of human bondage made palatable for mainstream audiences by the introduction of vampires was replaced by a relentless barrage of action scenes where nameless vampires are killed by Abraham Lincoln.

Since it is an action film, the protagonist has to be handsome and charming, a challenge since the real man was neither. Abraham Lincoln was the centre of attention in any group of men, who pressed around to hear his anecdotes, but he became tongue-tied in the presence of an attractive single woman. Instead, Lincoln is played by Benjamin Walker, who presumably was hired to be handsome and charming, and does what he was paid to do. 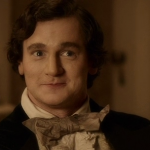 Throughout his life, Lincoln struggled with depression. At ease in court, political events or any large gathering, he was a sad, melancholic man in private. Joshua Speed, Lincoln’s roommate in Springfield, Illinois, commented after meeting Lincoln for the first time that he had never seen such a gloomy face in all of his life. Lincoln’s knowledge of the existence of vampires and the increasingly futile struggle to contain their threat would have explained his melancholic nature and bouts of depression, but that aspect of Lincoln’s personality was left out of the movie.

Ignoring the pervasive racism of the time, Will Johnson (Anthony Mackie), the screen Lincoln’s best friend is black, and he is a key aide in the White House during the Civil War. The only black who was in a position of trust in the White House was Elizabeth Keckley, Mrs. Lincoln’s dressmaker, who formed a close relationship with the First Lady, and helped found the Contraband Relief Association to support escaped slaves. Not only did the real Abraham Lincoln not have a best friend who was black, he had no relationships with blacks on an equal level. In fact, it was a significant event when Frederick Douglass, former slave and abolitionist leader, was the first African-American to be received formally at the White House during the reception following the inauguration of Lincoln’s second term.

A critical weakness with the script is that it takes away the strength of Abraham Lincoln by portraying him as having been a lifelong abolitionist. Even though he had no personal attachments with blacks, spent little time with them by choice, and as a lawyer, successfully represented a slave-owner who wanted the return of his property, he took the unpopular step of emancipating slaves when victory in the Civil War was far from certain, and it would likely deny him a second term as president. Admittedly, he was always opposed to slavery, believing no man had the right to own another man, but Lincoln’s attitude towards the Peculiar Institution, as southerners liked to describe their practice of keeping human beings in bondage based on the color of their skin, changed over the years. Prior to the Civil War, he simply wanted to ensure that slavery did not spread to the northern states, and he struggled against the more radical members of the Republican party who wanted to abolish slavery once the war had started, defending his gradual approach by saying that he had think of the nation as a whole, and the majority of the nation was not in favor of emancipation. Lincoln even stated that he would accept slavery if it would preserve the Union. Emancipation only became a reality once Lincoln recognized that slave-owners, even those who remained loyal to the Union, would never accept any form of gradual emancipation, even if the government reimbursed them for the value of the freed slaves.

The book, written by Seth Grahame-Smith, who also produced the screenplay, gained attention due to its catchy title, but was praised for the skillful weaving of historical facts into a story about a vampire slayer. The script kept the vampires but rubbished most of the history, which leads me to conclude that Grahame-Smith thought that movie audiences were only interested in slow-motion violence, special effects and cardboard villains with a minor historical tidbit or two, like the Underground Railroad, to make viewers feel they had learned something because the film is filled with slow-motion violence, special effects and cardboard villains. Most of Lincoln’s political career disappears, his legal career is never mentioned, and the screen Lincoln saw the twin evils of slavery and vampires firsthand because he grew up on a plantation owned by a vampire, even though Lincoln’s father moved from the slave-holding environment of Kentucky to Illinois, where slavery was not permitted to avoid slavery and to ensure that he owned his own land.

Aside from tossing any inconvenient historical facts into the dustbin, the action consists mainly of well-choreographed fight scenes where a never-ending stream of nameless vampires charge the fearless vampire killer, each one patiently waiting his turn to move on to the chopping line. This is not meant as a criticism of the fight choreography, but the vampires seem less threatening than the Cylons on Battlestar Galactica (the original, funky Battlestar Galatica, not the newer gritty, screwed-up-ending version). In the early stages of his career as a vampire hunter, Lincoln struggles to kill each vampire, but during the dramatic confrontation with Adam (Rufus Sewell), the vampire leader, in the middle of the movie, he slices and dices a dozen of the Adam’s best men at once. I have to admit, I wonder about the motivation of Unnamed Vampire Henchman #10 and Unnamed Vampire Henchman #11. After seeing Unnamed Vampire Henchmen #1-9 turned to dust by the tall man with the axe, it seems likely that Unnamed Vampire Henchman #10 or #11 would pause and think: “Damn, this guy is good. I’ve lived for centuries, and I would like to live for more centuries, maybe I should get a gun and just shoot him, bet he can’t dodge a bullet.” Nope, it’s just bare fangs, charge, slick choreographed move by Lincoln, slice, and dust.

Speaking of guns, did it really take until the end of the movie for someone to figure out that it would be easier to shoot vampires with silver bullets, rather than hack at them with a silver-bladed axe, especially since they are able to disappear and re-appear behind you? Instead of all of that tiring weaving and dodging, chopping and slicing, vampire hunters could simply point a gun at an unsuspecting vampire, pull the trigger, and no more bloodsucking. To be fair, Buffy the Vampire Slayer ran for seven seasons and no one thought of adapting a gun to fire wooden stakes instead of bullets. I miss Buffy.

The series of debates between Abraham Lincoln and Stephen Douglas during the 1858 Senate race are famous for the two men’s opposing viewpoints on slavery. While there is a brief scene of the two men debating, the only justification for the vampires’ treatment of African-Americans was that people had been taking advantage of anyone weaker than them for as long as there were people. Technically, it is not a debate, since Lincoln was a prisoner when Adam explained his perspective, but you take what you get.

No disrespect to Alan Tudyk, who is a fine actor, especially on Firefly, but he lacked the scorn for enemies and raging aggression that characterized the real Stephen Douglas, who was nicknamed the Little Giant because he possessed an anger and ambition far greater than his size of five feet four inches. If Ian McShane could be shrunken digitally in Snow White and the Huntsman, couldn’t they have done the same for Tudyk, it is not as if a smidgin more of CGI would have stood out in the movie.

Speaking of CGI, did the producers get a bulk deal? While sitting through the yawnfest that was the climax, I could not help but feel sorry for the lead actors, who must have been bored silly during the countless hours spent jumping around in front of a green screen. A train needs to reach Gettysburg to save the Union army, so Lincoln and his friends must defend the cargo against the vampire leader and more unnamed henchmen. A train is a naturally claustrophobic set, but most of the action took place on top of the train, removing any possibility of suspense. You have vampires who can turn invisible, narrow cars with only two doors, and gloomy interiors, just add some generic horror movie music to let the audience know when to be scared, the scenes write themselves.

Despite huge potential, the actual movie was astonishingly unimaginative. Bursting with countless elaborate and ridiculously expensive action scenes where humans routinely make death-defying acrobatics, the film numbs the mind into submission. To be honest, the number of missed opportunities is simply depressing.