The History Channel’s new show Vikings presents the exploits of Ragnar Lodbrok (Travis Fimmel), who was the first Viking to raid England, discovering a wonderful place where the inhabitants conveniently store their silver and gold in remote buildings protected by unarmed men who pray to a dead god. One would think that Ragnar would return to a hero’s welcome, but Earl Haraldson (Gabriel Byrne) resents a rival and schemes against him. Haraldson is needed as a villain since without him, Ragnar would be a brave explorer who goes to other countries that never did him any wrong, and kills their soldiers, steals their valuables, and takes people away as slaves. 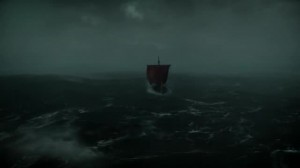 While the series whitewashes the thuggish side of the Vikings, it does pay tribute to the bravery of men who sailed in unknown waters to find a new land, not knowing if there actually was a land to the west. The Vikings’ ability to navigate before the invention of the compass and the sextant is explained or at least the script provides a plausible explanation. The first trip to England was one of the highlights of the season, showcasing the mix of courage, madness and refusal to accept limits that are needed by explorers. Then the Vikings hit the jackpot, finding a monastery filled with religious objects made from silver on display, protected by unarmed men with weird haircuts who pray to a dead god. 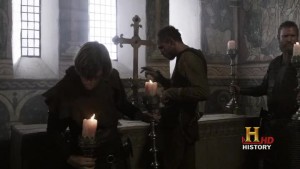 At Ragnar’s time, England was divided into four kingdoms: Northumbria, Mercia, Anglia and Wessex. As the kingdom closest to the Vikings, Northumbria, ruled by King Aelle (Ivan Kaye), would be a frequent target of raids. Since they raided on a regular basis, the Vikings were naturally more experienced fighters than the warriors serving King Aelle, but their main advantage was their ability to land anywhere along the coast, and sack a town or monastery before a real army could assemble. As the raids became more frequent, kings would sometimes give money to be spared the burning, looting, killing and general discomfort. The practice was common enough that there is actually a term for the process: danegeld. 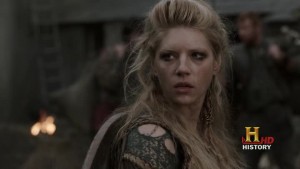 A key weakness is that only Ragnar, his wife Lagertha (Katheryn Winnick), brother Rollo (Clive Standen) and Floki (Gustaf Skarsgard), the slightly insane ship-builder with a fondness for make-up, are fleshed out, as if executive producer Michael Hirst is not really interested in the supporting cast. Fimmel radiates charisma, but not enough to carry the show when Hirst’s writing slips, which happens too often towards the end of the series.

It was a bold decision to make the protagonist a pagan who happily pillages strangers but none of the Englishmen approach even two-dimensional, they exist simply to be beaten by the Vikings, and King Aelle comes across as nothing more than a bully, instead of a king trying to protect his people from a plague of bandits. Since none of the people in England have any depth, the viewer will not identify with them, but with the more charismatic Vikings. 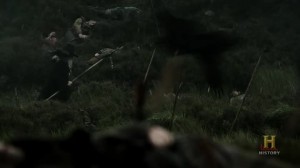 Aside from one scene in the first episode where Ragnar has a vision of Odin and sees the Valkyrie harvesting the dead, the gods remain absent but religion plays a serious role. The Vikings are contemptuous of the Christians because their God seems unable to protect them against the Vikings. Encountering an English monk Athelstan (George Blagden), who speaks Danish, during the initial raid, Ragnar claims the monk as his share from the raid. Clearly suffering from an early version of the Stockholm Syndrome, Athelstan becomes part of Ragnar’s family, even though they had slaughtered everyone he knew, and made him a slave. Honestly, the monk is useless. If he had stood out as being more caring than the Vikings and had started to convert people or if he was constantly mocked for his weak god, Hirst might have done something with his character, but he seems wasted. On the other side, the seer is one of my favorite characters, he is routinely weird, cryptic, and chilling, while consistently refusing to actually answer any questions. 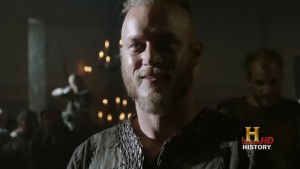 The religious aspect is critical, since otherwise it is just another cable show about tough men who live by their own moral code but are essentially bandits, stealing from those too weak to defend themselves. The Norsemen’s religion is shown in great detail but the conflict between religions is absent, which is disappointing since that conflict had made The Tudors an important show.

Show-runner Michael Hirst’s most successful show was The Tudors, which revolved around Henry VIII’s search for a wife who could give him a male heir, since it seemed unlikely that a daughter would be able to rule the kingdom on her own. Even though Ragnar already has a son, a major plot line is his obsession with having more sons, which seems a little contrived.

Is it accurate? Hard to say since everything is based on Norse sagas that were only written down hundreds of years after the events and records kept by Christians who were far from impartial. Regardless, it is fun to watch and an intriguing look at a period in history that has received little attention.