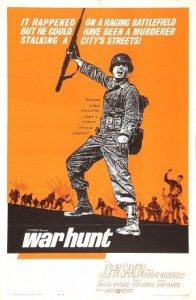 Private Roy Loomis (Robert Redford), an idealistic new recruit, is sent to the front in Korea in May 1953. The company commander, Captain Wallace Pratt (Charles Aidman), explains that they can not actually win the war because it has to be settled at the conference table. The enemy has to be hurt so that they lose men every day they stall at Panmunjon, making it easier for the UN negotiators. One member of Loomis’ squad, Private Raymond Endore (John Saxon), has adopted a Korean orphan named Charlie (Tommy Matsuda), and goes out every night to hunt the enemy. Captain Pratt accepts Endore’s independent actions because Endore brings back invaluable information about the enemy positions. However, the killings seem to serve some personal mission for Endore, since he draws a circle around each victim. The rest of the squad are completely intimidated by Endore, who is clearly insane. The troops just want to survive and go home, so they do the least amount possible, even ignoring a Chinese patrol they encounter during a night-time reconnaissance. When Loomis tries to bond with Charlie, Endore becomes dangerously jealous, and seizes an incident when Loomis was terrified with fear to break the growing bond. Even though the ceasefire has been announced, Endore goes out that night and takes Charlie with him to teach him how to kill, which threatens to derail the ceasefire.

Lacking the resources for large-scale battles, the production team chose to create a snapshot of life on the front, and they succeeded. Real footage of wounded men being evacuated helps create the atmosphere, and the combat scenes are well-staged, especially a brutal fight for survival between a wounded Loomis and a Chinese soldier who is robbing the dead.

The movie has a tiny budget, and it shows, but the set design is excellent, providing an accurate copy of the real bunkers on the UN lines. Rotated to the front, or the Main Line of Resistance, the company takes over a bunker with sandbags on the roof, that is located on a hill facing No Man’s Land. The Chinese fortifications are invisible because the Chinese had dug their way into the hills, so the overwhelming UN advantage in artillery was negated, since there were no enemy targets. While the company’s bunker appears solid, most bunkers on the UN lines were dangerous. The rocky terrain and narrow hilltops meant that it was extremely difficult to build solid bunkers that could withstand enemy artillery fire. Unlike the Chinese, who had tunnelled into the mountains, the UN forces, especially American units, had built bunkers on top of the hills, so many American soldiers seeking shelter in bunkers died when the bunkers collapsed during heavy shelling. Barely strong enough to bear the weight of the sandbags placed on top of the bunkers, the bunkers’ structure could not cope with the additional force caused by exploding shells. Furthermore, runoff from rain would weaken the underside of the bunkers, which had been placed on top of hillsides, rather than embedded within the hillsides. The trench line had been constructed quickly and usually without the guidance of engineers, as newly arrived engineers recognized to their horror.

Chinese loudspeakers welcome the company when it arrives at the front. Suddenly the music stops and the shelling starts as they burrow into the trench. Everyone is terrified, and Loomis waits what he thinks is a long time and is shocked to discover that only two minutes have passed. A couple of hours later, he is so dazed that he has to be shaken before he can respond. Strange as it may sound, the Chinese did have loudspeakers playing music and they often did welcome units by name in order to weaken morale.

It is one of the few movies to admit that victory was impossible at that stage of the war, so the company commander admits that the only goal was to hurt the Chinese enough that they would give in at the negotiating table. The soldiers believe that the only goal is to survive by taking as few risks as possible, which was a common attitude at that stage of the war. Despite the static nature of the fighting, soldiers were exposed to the constant threat of death in a war that held no meaning for them, especially since they knew that people back home had no interest in the war. The Chinese lacked the UN force’s wealth of artillery shells, so shelling was rare, but that would be little comfort to the company that did suffer through a bombardment, especially given the poor conditions of the UN trenches.

The screenwriter clearly did an impressive amount of research to recreate life on the front, but the struggle between Loomis and Endore for Charlie’s soul is given too much screen time. Endore may not be a likeable character, but he is interesting, and even sympathetic at moments. Unable to comprehend military discipline, he is not insubordinate, he just does not know how to be a soldier. The only time he shows fear is when the battalion commander threatens to confine him to his tent as punishment for failing to say sir. However, you never understand why Endore is compelled to murder, so it is unknown whether it was a reaction to the war or if he was a potential serial killer before he was drafted, and just adapted really well. Nor does the movie actually deal with the idea that men are trained to kill and then forced to return to civilization, because everyone else loathes the war, and just wants to go home, even the regular soldiers.

Exploring similar themes, the movie is a precursor to Platoon. Endore does not want the war to end, and he plans to turn Charlie into a younger version of himself. Always on the verge of exploding with violence, Saxon is a very believable psycho. When Loomis confronts Endore about Charlie’s future, Loomis is shaking with fear, and I wonder if Redford’s fear was genuine.

It is Robert Redford’s first role. He is good but he had not developed his presence, and is a little wooden. Sidney Pollack, who plays an experienced sergeant, clearly decided to switch from acting to directing shortly after the movie, and he must have gotten along well with Redford, since they made seven films together.

Essentially a B movie, the film was made in fifteen days on a miniscule budget. The first hour of the movie is brilliant, but the last twenty minutes are strange. Endore is obviously crazy, and is basically a serial killer, but his story should not dominate the script. Still, no other movie comes close to capturing the futility of the Korean War once it had entered the stalemate stage.