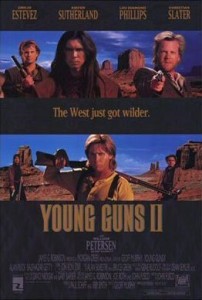 William Bonney (Billy the Kid) had become an orphan when he was fourteen years old. Left to fend for himself, he drifted into crime at an early age and was already wanted for murder when he arrived in Lincoln County, New Mexico in 1877. After riding with a group of rustlers for a period of time, he began working for John Tunstall, an English rancher and merchant who was engaged in a fierce competition with Lawrence Murphy and James Dolan, merchants who took a dim view of any threat to their domination of the county. The competion escalated until Tunstall was murdered in 1878 by members of the Dolan-Murphy faction. Tunstall’s partner, the lawyer Alex McSween, arranged for Tunstall’s ranch hands to be deputized in order to arrest the men suspected of Tunstall’s murder, and the resulting conflict between the two factions became known as the Lincoln County War. The Regulators’ inability to take prisoners and frequent gunfights in the town of Lincoln caused them to lose the public’s sympathy. When Dolan’s political connections ensured that the governor of New Mexico declared them to be outlaws, their days were numbered.

One of the few survivors of the Lincoln County War, Bonney had fled to Texas. Newly-appointed Governor Lew Wallace (the author of Ben Hur) had offered amnesty to everyone involved who was not already under indictment. Since Bonney was under indictment, he made a deal with Governor Wallace to testify against the Dolan faction in exchange for amnesty. Unfortunately, the prosecuting attorney was part of the Dolan faction and intended to see Bonney hang. Bonney escaped from the jail and supported himself by rustling. When the rustling became too problematic for the local ranchers, Sheriff Pat Garrett led a posse to hunt down the rustlers.

The movie starts with an old man telling a young lawyer that he is Billy the Kid and he wants to be pardoned before he dies, which is based on Bushy Bill Robert’s claim to be William Bonney.

Bonney is now riding with Dave Rudabaugh and Pat Garrett, who are treated like heroes in old Fort Sumner. Governor Lew Wallace has declared war on outlaws and he is rounding up everyone who was involved in the Lincoln County War, including Chavez and Doc Scurlock, the only other survivors of the last film. The governor wants to break the survivors of the Murphy gang because they have been rustling too many herds, so Wallace offers Bonney a pardon in exchange for his testimony and his promise to leave New Mexico. Bonney agrees but the prosecuting attorney is part of the Murphy faction, and decides to prosecute Bonney. Bonney escapes and recruits an even bigger gang. He also goes out of his way to make an enemy of John Chisum, the most powerful rancher in the state.

Since the current sheriff is unwilling to hunt Bonney down, Chisum works with the governor to ensure that Pat Garrett becomes sheriff of Lincoln County. Fed up with Bonney’s rustling, the Cattlemen’s Association sends John Poe and several goons to help Garrett with the hunt for Bonney.

The story follows the basic chronology of events but makes the outlaws more pleasant and sober than they probably were in real life. While New Mexico is shown as being settled by anal-retentive puritanical Easterners, the real Bonney and his friends gradually lost public support because they actually were criminals, who stole other people’s property, usually cattle, and frequently reached for their guns instead of their wallets when pressed to pay their bills.

The screen Bonney is driven by a desire to keep the gang together despite the risk to his life and his friends’ lives. Actually, Bonney did not know any other way to live and hung out with men who lived outside the law. Garrett’s actions show that he is losing his soul, which seems a bit forced, and more importantly, did not happen. The real Garrett was a hard man and the two men were not friends. However, the hunt for Billy is properly shown as a hunt, a cold-blooded assassination. There is also a nice subtext about how people from the East are making New Mexico civilized, so there is no place anymore for Bonney and his friends.

Unlike the first movie, the action relies more on special effects, not shootouts, but it is entertaining and relatively accurate. Unnecessary conflict between the members of Billy’s gang is invented, but nothing too extreme, no melodramatic shouting matches, just violent men settling disagreements with violence.

The second movie has more of a sense of fate and tragedy than the first. While the action was better in the first movie, the second movie relies less on a black and white approach, preferring instead to show that there were no heroes, just violent men unwilling to accept that their time had passed.