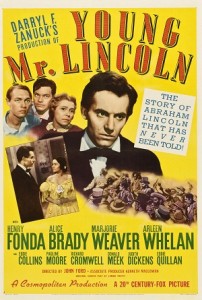 Operating a store in New Salem, Illinois, Abraham Lincoln (Henry Fonda) is running for state legislature in 1832. Following the unexpected death of his first love, Ann Rutledge, he moves to Springfield to open a law firm. When a local deputy is killed during a fight with a couple of strangers, the two men are accused of murder. Arrested, they are about to be lynched, until Lincoln saves them from the mob and agrees to defend them. Meanwhile, society belle Mary Todd (Marjorie Weaver) is clearly attracted to him, even though he is too shy to openly court her, and her relatives prefer rival suitor Stephen Douglas (Milburn Stone). Despite his humble manner, Lincoln proves to be a sharp cross-examiner, but the case seems bound for failure since the prosecution has produced an eye-witness to the murder.

More interested in legends than facts, director John Ford made sure that Henry Fonda’s portrayal matched the essence of the real man, but was not afraid to stretch the truth in order to make an enjoyable story. The genuine Lincoln never actually faced down a lynch mob, but the scene does capture his style, a mix of simple, self-depreciating jokes and appeals to their better nature. At one point, Lincoln explains that he is helping the two young men accused of murder because their family reminds him of his family, and the script does correctly describe his relatives, but the real man rarely talked about them, as if he preferred to forget the experience.

The early scenes present the growing relationship between Lincoln and Ann Rutledge, who is pushing him to study law, even though he had only had a single year of education throughout his whole life. Although it is true that the real Lincoln had received almost no formal education, he was an ambitious man and did not need encouragement to start a legal career. While the two were close, it is doubtful that she pursued him, since she was already engaged when they knew each other.

Fascinated by American history, Ford loved to show the lives of people at the time, and this movie is no exception, so there are rail-splitting, tug-of-war, and pie-judging contests. An Independence Day parade illustrates the youth of the republic, since veterans from the War of 1812 are marching with canes and there is even a handful of elderly veterans from the Revolution sitting in a carriage. When the genuine Lincoln ran for president in 1860 he permitted his campaign managers to produce posters and campaign materials that presented him as having split rails for a living, so that people would think that he was one of them, instead of a wealthy lawyer, even though he had grown up poor. Despite the myth, Lincoln would have died rather than enter a rail-splitting contest once he had become a lawyer, but it is cool to watch how it is done.

Furthermore, the real Lincoln was already relatively successful when he started courting society belle Mary Todd. Although the screen version is too aggressive, it is true that she did most of the talking during their courtship. While Lincoln would become the center of any circle of men, whether well-educated lawyers or rough-edged laborers, he was genuinely tongued-tied around women.

Although rarely mentioned in other movies, many northerners were opposed to slavery because slaves took away their jobs, not out of sympathy for blacks. In fact, racism was widespread in the north, and blacks were not welcome in many communities.

The story is based on Lincoln’s defence of the son of his old friend Jack Armstrong, who was accused of murdering a man in a brawl. Lincoln did win the case by quoting the almanac to prove that the witness could not have seen the killing by the moonlight. However, the actual trial took place in 1858, more than twenty years after the period depicted in the movie, when he was a far more experienced lawyer.

Although Milburn Stone is too tall and too dandified to be Stephen Douglas, the “Little Giant,” Donald Meek is excellent as the prosecutor, a butt of Lincoln’s jokes until he turns nasty and tries to intimidate the suspects’ mother when she is on the witness stand. However, the key role is obviously Lincoln, and Fonda gives an impressive version of Lincoln, well, a young Lincoln.

It was the first film Fonda would make with Ford, followed by Drums along the Mohawk and Grapes of Wrath, all made in the space of a year.

A very good film, it would have been great if it had not been weighed down by the early scenes in New Salem. Apparently Ann Rutledge’s role had already been cut down before filming started, and the film would have benefited greatly if it had been eliminated entirely, since it adds nothing to the story, and her scenes honestly seem to have been written for a different movie.

While the court-room scenes are rich with humor, they also show that Lincoln was a shrewd cross-examiner. A former journalist, screenwriter Lamar Trotti filled the trial scenes with details from a trial that he had reported on.

Ford basically wanted to show how a simple country lawyer would become the preserver of the Union and the Great Emancipator, so the film ends with a shot of Fonda that dissolves to the statue in the Lincoln Memorial.

Despite a slow start, the trial scenes are excellent and it is a touching movie.