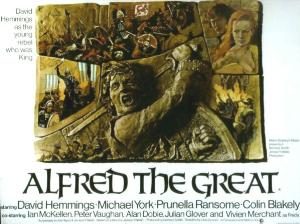 England was divided into four kingdoms: Northumbria, Mercia, East Anglia and Wessex, when the Great Heathen Army arrived in 866AD. While Vikings had been raiding England for decades, previous raiding parties had involved twenty ships, but roughly three or four hundred ships brought five thousand men. The army was led by Halfdan, Ubbe and Ivar, sons of the famous Viking Ragnar Lothbrok. Northumbria, their first target, was in the middle of a civil war, and fell in 867. Eager to conquer more of England, Ivarr installed Ecberht, a Saxon, as a puppet king, and moved on Mercia in 868. King Burgred was aided by King Athelred of Wessex, but the Saxon armies were made up mostly of farmers, who could not remain long enough for sieges. After receiving a ransom from Mercia, Ivarr returned to York, and planned his next conquest, which proved to be East Anglia. Having captured two kingdoms, Ivarr returned to Ireland in 870. As a Scandinavian, an empire of northern kingdoms based on York and Dublin made more sense than conquering the southern kingdoms of England. Haldan led another army through Mercia to attack Wessex in 870, and several major battles took place over the next year as Wessex fought the Danes to a bloody draw. Aethelred died during one of those battles, and was succeeded by Alfred. Halfdan then persuaded many Mercian nobles to back a rival claimant for the throne, depriving Wessex of its last ally. In 874, tired after fighting for nine years, Halfdan led part of the army back to Northumbria to consolidate his family’s territory. However, Guthrum and the more recent arrivals would continue against Wessex.

Alfred (David Hemmings) is about to become a priest but a Viking army led by Guthrum (Michael York) has taken East Anglia, and threatens Wessex. Using his older brother King Aethelred (Alan Doble) as bait, the Danes are lured into a trap. Having ended the immediate threat, Alfred just wants to return to the church but Burred (Peter Vaughan) of Mercia arrives in Wessex to discuss an alliance and marriage to his daughter Aelswith (Prunella Ransome). When Athelred dies, the royal council offers the throne to Alfred, who accepts reluctantly. Despite the alliance, half of the Mercian nobles swear allegiance to Guthrum, so Burred flees to Frankia. Deprived of allies, Alfred negotiates with Guthrum, who accepts a lot of gold in exchange for peace, and then demands Aelswith as a hostage. Aware that the peace is temporary, Alfred wants to train an army but men desert for the harvest, so he has a noble flogged. Having lost the support of the other nobles, a sudden attack by the Danes in the middle of winter forces Alfred to flee to the marshes. Aelswith surrenders to the advances of the manly Guthrum while Alfred and his few followers are captured by outlaws led by Roger (Ian Mckellan), who is persuaded to support him. When spring comes, he summons the nobles to Ecbert’s stone and employs the Greek phalanx to win a decisive battle against the Vikings. A defeated Guthrum is spared, and Aelswith goes back to Alfred when he treats her better.

The film provides little background other than that England was divided into several kingdoms, and the greatest was Wessex. The script states that Alfred was only 22 in 871 when the pagan Danes invaded, except the invasion actually started in 866. There is no mention that Alfred’s victory at the start of movie was the Danes’ first defeat after a series of victories against Saxon armies, and Northumbria, the first of the English kingdoms to be conquered by the Danes, is never even referred to.

While the screen Aelswith was Burgred’s daughter, the real Alfred married Aelswith, daughter of a Mercian noble. Burgred’s daughters would have been a better match, but they were his sister’s children. Admittedly, the records of Alfred’s reign are limited, but there is not even a hint that Aelswith was ever a hostage, never mind had an affair with Guthrum. Also, Alfred and Aelswith’s first child was their daughter Aethelflaed, not Edward.

Since the script focuses mainly on Alfred’s struggle to choose between the Church and the defence of the kingdom, there is little time left for political complexities. Although the Lothbrok brothers were the main leaders, the Great Heathen Army was a huge mix of Vikings from Denmark, Norway and Sweden. Guthrum was one of the major leaders aside from the Lothbroks, but the movie completely ignores the Lothbrok dynasty. The screen Ivar the Boneless (Julian Chagrin) is a wicked swordsman but he is merely one of Guthrum’s better warriors, rather than a son of Ragnar Lothbrok. In fact, the script does not even refer to Ragnar.

In addition, the absorption of Mercia into the Viking hegemony is barely explained. In the film, half of the Mercian nobles apparently tire of fighting and swear allegiance to Guthrum. In reality, when Halfdan allied with Ceolwulf II, a rival claimant to the throne of Mercia, Burgred realized that his time was done and abandoned his throne, going on pilgrimage to Rome, and Ceolwulf was accepted with surprisingly little opposition. The Vikings had proved to be skilled political operators.

To its credit, the movie does not sugarcoat the invasion. At one point, Guthrum leads the Vikings to raid an abbey, where they steal all the gold ornaments and rape the nuns.

While the script captures the nobles’ dissatisfaction with Alfred, there is no explanation of the dissatisfaction other than his decision to flog a noble. Again, the records are limited but it is plausible that Alfred was forced to flee to the marshes after a coup, likely led by nobles fed up with years of warfare, expensive ransoms to buy temporary peace and a sickly king, who might die soon. The Vikings had successfully orchestrated regime changes in other kingdoms, and one of Alfred’s rivals may have attempted to repeat the process.

The movie ends with a climatic defeat of the Viking invaders, the capture of Guthrum, and the return of Aelswith to Alfred, which is a major exaggeration. While the defeat at Bratton’s Camp did force the real Guthrum to accept that he would never capture Wessex, he was not captured. Admittedly, he did convert to Christianity to appease the fervently religious Alfred, but he also received official recognition of his control over East Anglia and the eastern half of Mercia, which became known as the Danelaw. Hardly an overwhelming defeat.

To the best of my knowledge, this is the only film about Alfred the Great, and it is a disappointment.

For a film with numerous battles, the fight choreography is surprisingly weak, but I have to praise the decision to show exhausted armies take a break during a battle, which I have never seen before. Moreover, I like that the Saxons throw out their dead from their formation during pauses in the fighting.

Since little is really known about Alfred, the decision to portray him as an arrogant young man, who looks down on everyone as ignorant, since he reads Ovid in Latin, is valid, although this portrayal does not make any scenes with him pleasant to watch. As King Athelred’s heir, Alfred knows he can not become a priest, but whinges endlessly about how he never wants to take up the sword, which becomes tiresome almost immediately.

On the plus side, the film avoids a glossy portrayal of the period. Entertainment seems to consist solely of drinking large quantities of ale and watching acrobats, but even the richest hall seems roughly made and no one seems very happy, as if they know there is a better way to live, or simply wish they were in a better movie.

While the invading Danes were called the Great Heathen Army due to their huge numbers, the producers apparently only had enough money to pay for a couple of long ships, or were unwilling to use models, so the first appearance of the Vikings lacks dramatic punch.

The sexual politics are weird. Aware that Alfred longs to become a priest, Aelswith intrigues him, so he sets his hunting dog on her and then kisses her. Despite this rough courtship, it is a love match, not a dynastic alliance, he wants her more than he wants the priesthood. Believing that he was was tricked into marriage and then the throne, Alfred throws a major hissyfit and refuses to consummate the marriage after slapping Aelswith, but weakens and rapes her. She still loves him though.

I love Athelstan’s reaction when he learns during the wedding banquet that Athelred has died: he spits out his ale and comments that it is just like Athelred to ruin a party.

Prunella Ransome is good as Aelswith, and Michael York’s Guthrum has a great villain laugh. However, the standout is Vivien Merchant, who plays the wife of Roger, the bandit leader, and gives one of the better performances in the film, despite not uttering a single word. I initially thought that she did not speak English, but then I checked, she is an English actress and the ex-wife of the playwright Harold Pinter, so I suspect that she simply refused to say her lines. Wise choice, she communicates more with a glance than the rest of the cast, who are struggling to say their lines with a straight face.

Speaking of the script, one of the screenwriters was James Webb, who specialized in Westerns, and had written Apache (1954), Vera Cruz (1954) and the beautiful Cheyenne Autumn (1964), so I have to wonder whether he was actually involved.

I expected more because Clive Donner had directed What’s New Pussycat?, one of my favorite films, but I think that Peter Sellers and Peter O’Toole had more influence on the script, since none of his other films ever made much of a splash. Many of his films were slapstick comedies, and Alfred seems similar but without the humor.

Now we know why Alfred is called the Great, he defeated Guthrum’s army, beat Guthrum in single combat and reclaimed his wife, who had been Guthrum’s mistress.