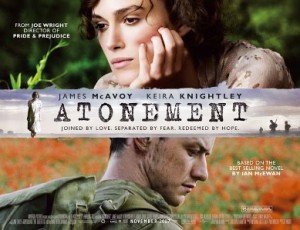 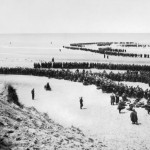 Both the French and British military leadership thought that armies moved as slowly as they had in WWI, but the Germans had developed fast-moving armoured units that had trained to work in tandem with Luftwaffe bombers. The Germans launched a two-pronged offensive on May 10, 1940. One prong moved through Holland and Belgium to distract the Allies, while the second prong, made up largely of armoured units, made its way through the Ardennes Forest, where the French defences were weak, thus trapping the Allied armies in a pincer. Faced with the destruction of the British Expeditionary Force (BEF), General the Viscount Lord Gort, the commander of the BEF, decided to fall back to the Channel ports and evacuate the British army, so the Royal Navy mobilized an astonishing fleet of ships, including civilian ferries and personal motorboats, to save the BEF at Dunkirk, evacuating 338,226 men between May 26 and June 4. 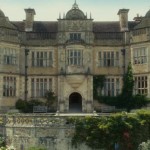 In 1935, thirteen-year-old Briony Tallis (Saoirise Ronan) witnesses a sexually charged confrontation between her older sister Cecilia (Keira Knightley) and Robbie Turner (James McAvoy), the housekeeper’s son, but she is too young to understand the dynamics of the relationship. Despite a powerful connection between Robbie and Cecilia, they move in different social circles, and Cecilia is being set up with her brother’s wealthy friend Paul Marshall (Benedict Cumberbatch). Embarrassed by the incident, Robbie writes several versions of an apology but gives Briony the wrong letter to deliver to Cecilia. Unknown to Robbie, Briony read the letter, and later catches Robbie and Cecilia in an act of passion. When Briony observes a man raping her fifteen-year-old cousin but only sees his back, she accuses Robbie, who is arrested, and sent to prison. 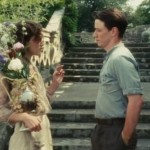 Four years later, Robbie has joined the British army to get out of prison. Sent to France as part of the BEF, he is making his way to the coast with two other soldiers. Six months earlier, he had re-united with Cecilia, who had broken with her family and has become a nurse. Briony (Romola Garai) has also become a nurse, while writing a story about the incident. Briony eventually meets with Cecilia and Robbie, who refuse to forgive her. The movie ends with an elderly Briony (Vanessa Redgrave) being interviewed after the publication of her 21st novel, which is an autobiographical novel.

The first half of the movie is a romance between people on opposite sides of the class divide, so the debate over the likelihood of war with Nazi Germany is a topic of conversation, but not the dominant one. Given that a third of the movie takes place in France, either during the retreat to Dunkirk or at Dunkirk, one would expect more attention to be paid to the war. Unfortunately, director Joe Wright is far more concerned with beautiful images than an accurate portrayal of the retreat to Dunkirk and the evacuation of hundreds of thousands of men. 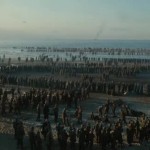 The shot of soldiers queueing on the beach is a faithful recreation of pictures taken during the actual evacuation. Littered with scared, tired men, the beach is a giant mess. However, the real evacuation was more organized. Despite the huge cost of setting up the location, most of the time at Dunkirk consists of Robbie wandering around in a daze, while the rest of the army serves merely as background scenery. More effort is devoted to an impressive tracking shot of soldiers singing in a choir on the beach than actually explaining the evacuation or even showing a single ship. Although they only had two days to film the main beach scene, the key issue was Wright’s desire to make a David Lean shot, just to prove that he could, not to show the evacuation itself, so the extended tracking shot of Dunkirk is simply ego-stroking. During the real evacuation, men lined up in the water to be able to board the ships, and would wait until the tide reached their mouths before giving up their place in line. While soldiers standing for hours in water may not be as exciting as men singing in a choir, a director with vision like Wright should have been able to make that interesting, possibly using a digital image of a destroyer to stay within the budget. If he had thought that it was important. The evacuation at Dunkirk was a remarkable logistical accomplishment, so it seems strange that Wright did not think that it was as important as men singing in a choir. Maybe he really, really likes choirs. 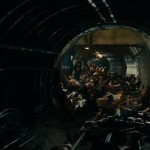 Back in England, there are brief reports of the war, which seems far away, until the wounded start arriving from Dunkirk. Footage is shown of the troops returning from Dunkirk and being sent on trains to camps all over the nation, and the footage looks like newsreels from the time. There is also a great shot of people sleeping in the tube stations during the Blitz. The film’s main weakness is that everything is beautiful, even the mud and the blood are artfully arranged.

Filled with the stunning imagery that only exists in Hollywood films, Atonement is not about the war but about Briony’s quest for atonement. 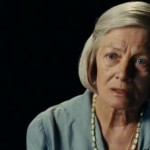 All of the actors are excellent but the performance by Vanessa Redgrave as the elderly Briony is simply superb.

At first glance, Atonement appears to be a compromise movie, which is primarily a tragic romance to attract women, but has a battle scene to satisfy their husbands and boyfriends. I thought that I would hate the romance and love the scenes at Dunkirk but it proved to be the opposite. There is no denying that Wright is a talented film-maker. Avoiding unnecessary dialogue, during the incident between Robbie and Cecilia at the fountain, the camera focuses on Robbie’s hand, conveying a frustration and longing that he does not know how to express in words. The decision to present both Briony’s view of events and the actual events enables the viewer to understand why she accused Robbie.

The movie is an excellent portrayal of the social divide that existed in England before WWII. To be honest, many directors would be satisfied with Cecilia’s struggle to admit that she is in love with someone far below her social station, which occupies the first half of the movie.

Famous for his love of art, the director has admitted that many of his shots are modeled on classic paintings, which explains the emphasis on imagery during the war section. Unexpectedly, the earlier scenes of the romance between a young couple separated by the social divide are much more interesting and coherent than the scenes set during the Dunkirk Evacuation. Far more comfortable with sexual tension and class issues, director Joe Wright’s emphasis on stunning images rather than actually explaining how the British army was successfully evacuated from France at the beginning of WWII proves that he does not know how to direct a war film.