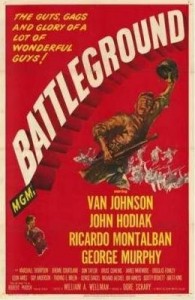 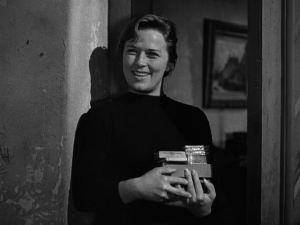 In mid-December 1944, Jim Layton (Marshall Thompson) reports to a platoon in the 101st Airborne Division as a replacement, but is ignored by the veterans. Eagerly looking forward to a three-day-pass to Paris, the men suddenly learn that the Germans had made a breakthrough somewhere, so they are sent to fill the gap. The news is not welcomed by Pop Stazak (George Murphy), the oldest member of the platoon, who is about to be sent back to the US to take care of his family. Arriving at Bastogne, the platoon enjoys a friendly welcome from the charming and shapely Denise (Denise Darcel), who opens her home in exchange for chocolate and cigarettes. While the men are asleep, one of the guards encounters exhausted soldiers coming back from the front, retreating through the town with stories of an unstoppable wave of Germans. Learning that German soldiers are pretending to be American, paranoia spreads, and patrols ask strangers questions about American trivia. After several days of fighting, the men are told that Bastogne has been surrounded. Since cloudy weather prevents aerial drops of supplies, the men start running low on food and ammunition. Despite the hardships, the soldiers are pleased when they learn that the commander of the American troops at Bastogne refused the Germans’ demand that they surrender.

Robert Pirosh, the screenwriter, had fought in the Battle of the Bulge as a member of an infantry division, so the script captures the perspective and confusion of the soldiers. Throughout the film, the men have no idea what is going on. Their world has shrunk to their company. One of the soldiers finally explains that Bastogne is important because it is a road junction that leads to Antwerp. The men read about the Battle of the Bulge in the Stars and Stripes, the army newspaper, but are not sure if they are in Belgium or Luxemburg.

Unlike the patriotic war movies produced en masse by Hollywood during WWII, the film is an honest look at the war, portraying the soldiers as human beings with faults. While it may seem rather tame today, it was remarkably gritty at the time. Battling fever and frostbite, the men constantly grumble and dream of wounds that would send them home, but they endure and continue to fight. Private Holly (Van Johnson), the best scrounger in the platoon, has tried to avoid responsibility but has to take over when the sergeant is badly wounded. Recognizing the danger of the situation, Holly starts acting like a sergeant. Meanwhile, Layton follows Holly’s example and becomes a scrounger, always looking for an angle. 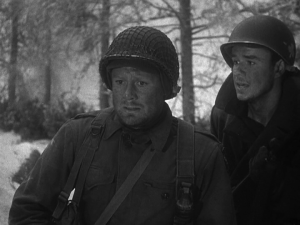 One scene in particular reflects the film’s realistic attitude towards war. At one point, Holly runs away during a battle, but changes his mind when he is followed by Layton. Embarrassed that the younger man witnessed his panic, he leads a counter-attack that enables his platoon to win the skirmish. Later, Layton admits to Private Jarvess (John Hodiak), a grizzled veteran, that he was terrified, and Jarvess responds that they are all scared. As Layton tries to understand how the veterans could attack when they are terrified, he receives a simple explanation: “Things just happen. Afterwards you try to figure it out.”

While the movie was ahead of its time because of its realistic portrayal of soldiers, it was still made in 1949, so the men’s carnal urges are toned down. The men are eagerly looking forward to three days of leave in Paris, when they learn they will be sent to stop a German breakthrough. Actually, the real soldiers had already started their leave, so the MPs had to scour the bars and bordellos of Paris to find them.

Denise is remarkably cheerful, even though she has to care for two children who were orphaned during a bombing raid. Whether the gratitude was genuine or not is unknown, but she did grab as many chocolate bars and packs of cigarettes as possible in exchange for her hospitality. Unimpressed with Denise’s friendly attitude, one of the paratroopers resents all of the Europeans, saying they are only friendly if you give them cigarettes and chocolate.

While it is true that the turning point in the battle occurred when the weather improved, enabling planes to drop supplies for the troops in Bastogne, the script goes overboard when it shows that the troops immediately counterattacked after receiving supplies, and had driven off the German attackers before Patton’s tanks reached Bastogne. In reality, the supplies simply enabled the men at Bastogne to hold on until Patton’s tanks broke through the Germans surrounding the town. 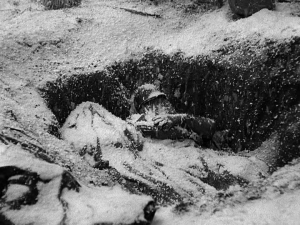 In most war movies, foxholes magically appear but a great scene shows how long it takes to dig a foxhole, while the film repeatedly reminds viewers that sleeping in a foxhole during a snowstorm is far from comfortable.

While English-speaking German soldiers did masquerade as Americans, it was a small operation and it only took place in another part of the front, not at Bastogne. However, the scene where soldiers from different units quiz each other about baseball trivia is an accurate portrayal of the paranoia that spread through the American army. At one point, military intelligence feared that the infiltrators planned to assassinate General Dwight Eisenhower, supreme commander of the Allied forces in Europe, so he was placed under strict security, until he became fed up and dismissed his over-enthusiastic bodyguards. 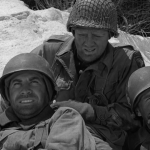 Shortly after the platoon reaches Bastogne, Layton finds out that his buddy, a fellow replacement who was assigned to a different company, had died the night before. Stunned that the men in his platoon do not even know his friend’s name, Layton obsessively informs everyone he serves with his full name until he is finally accepted. By that time, he has become as unshaven and bitter as the veterans. As the battle continues, the men become too tired to complain, and focus on survival. Near the end of the siege, the survivors look through piles of gear from dead soldiers for coats and goulashes that fit. Meanwhile, civilians root through garbage cans for leftovers. 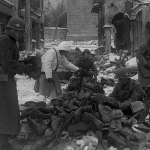 Producer Dore Schary had purchased the rights to the story despite the misgivings of Louis B. Mayer, head of MGM, who believed that the public had lost interest in war films. Schary was proven right, and Battleground was the studio’s most profitable film that year.

Director William Wellman had flown with the Lafayette Corps during WWI, and directed Wings (1927), which was the first film to win the Academy Award for Best Picture. Although he was an airman at heart, he clearly understood infantrymen, since he made an excellent film.